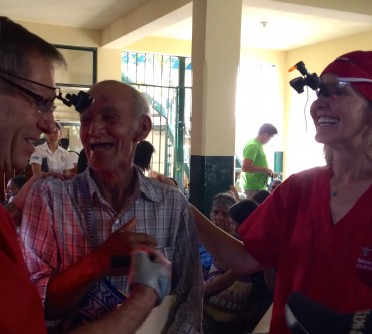 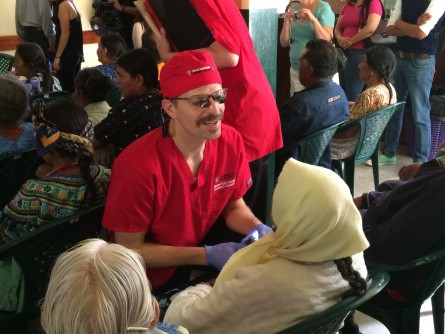 Jeff Pettey, M.D., removes bandages from a patient who received cataract surgery at the Hospital de Ojos Club de Leones in Salama, Guatemala. Pettey and others from the University of Utah’s John A. Moran Eye Center performed about 200 surgeries to people in need. Sen. Rand Paul, R-Kentucky, joined Moran doctors on the trip. 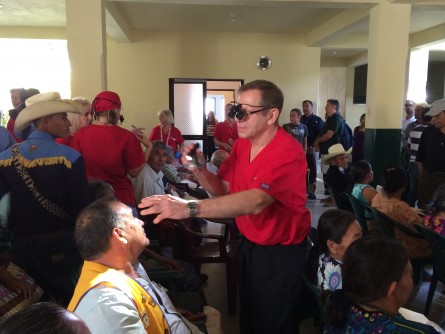 Alan Crandall, M.D., examines a patient after removing a cataract from the man’s eye a day earlier as part of an outreach mission for the University of Utah’s John A. Moran Eye Center in Salama, Guatemala. 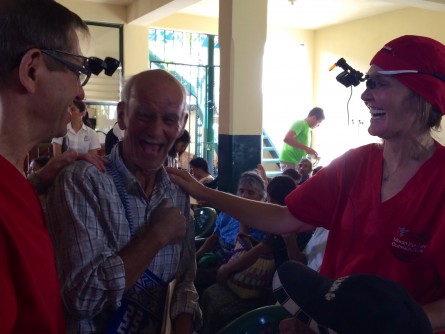 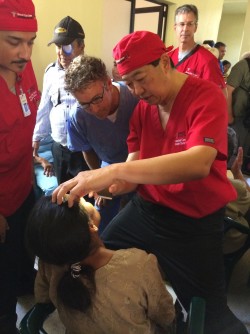 Newswise — Bernardo Reyes didn’t mind the long, winding bus ride that brought him from the remote hills of his 20-person village to a small clinic with one operating room in Salama, Guatemala. The 84-year-old farmer —who still grows his own corn, beans and peanuts in order to survive on about $1 each day —knew the trip from his quiet home would give him a chance to do something he hadn’t been able to do for years: See clearly.

With a cataract clouding his vision, Reyes was optimistic when he heard a radio commercial that mentioned a team of ophthalmologists from the University of Utah’s John A. Moran Eye Center would be coming to the region to perform surgeries for those who wouldn’t otherwise have access to health care to correct their vision problems. So, Reyes walked and then rode a bus three hours to Salama, arriving at the clinic on Monday. He was one in a crowd of more than 100 that stretched outside a Lion’s Club Eye Hospital, anxiously awaiting the services of surgeons ready to perform 200 procedures by the end of the week. Such sight-restoring options are hard to come by in the outskirts of central Guatemala, Reyes said. “I will never forget these people until the day I die,” he said before medical staff treated him. “Because of them, I’ll be able to see again.”

“Stories like Reyes’ are at the heart of the work of surgeons who trek around the globe to help people like Reyes as part of the Moran Eye Center’s International Outreach Division,” said Alan Crandall, M.D., co-director of the outreach division and senior vice-chair of the Department of Ophthalmology and Visual Sciences. Several times a year, Moran Eye Center physicians and staff set up medical eye camps in some of the most neglected corners of the world, including South Sudan, Micronesia, Haiti, Bolivia and Myanmar. The medical teams, however, don’t just work for a week and leave the country —throughout the process medical teams not only work with local providers to perform as many surgeries as possible, they also train local partners on how to provide basic eye care and perform simple surgeries, which allows countries to develop a permanent source of eye care for the underserved regions

Reyes’ case is emblematic of a larger part of worldwide blindness, the majority of which is caused by a simple lack of access to health care. Today, four out of five blind people around the world could be cure if they could see an ophthalmologist for treatment.

Thirty-nine million people worldwide are blind, and about 90 percent of those cases are people who live in poverty-stricken developing countries, according to the most recent statistics from the World Health Organization. Blindness, however, doesn’t only affect the person who has lost his or her vision. The WHO estimates that for every blind person in the world, 2.5 people are lost from the workforce, as they care for vision-impaired relatives instead of being able to get a job or go to school —an estimated loss of productivity that adds up to $2.7 trillion a year.

“Vision is something we take for granted in our country, and when you lose your vision it’s life-changing,” said Michael Yei, program manager of the Moran Eye Center Outreach Program. “Many of the patients have been blind for many years, and when they leave they’re going to have close to 20/20 vision.”

Patients who visited the Moran Eye Center’s clinic in Guatemala came with a variety of backgrounds and stories. Maria Paulina Lopez DeLeon, a member of the Achi indigenous community, arrived with her daughter and granddaughter in tow to help explain her vision problems. Of Mayan descent, she didn’t speak Spanish, but said through a translator that her cataract surgery would be life-changing. “I can’t see and we are very poor. We don’t have the money to get help,” she said, as her 9-month old granddaughter peeked out of a traditional woven dress nearby. “I am grateful to God and all the doctors here who can help me.”

Other patients received care from a special visitor on the Guatemala trip -- Sen. Rand Paul, R-Kentucky, a practicing ophthalmologist and a possible GOP presidential contender in 2016. Paul connected to the Moran Eye Center after he sought a recommendation from the American Society of Cataract and Refractive Surgery Foundation for a strong international outreach program that he could accompany on a medical mission.

In between surgeries this week, Paul said he is impressed with the Moran Eye Center’s ability to serve many people on a large-scale in Guatemala. “I don’t know how we would have done this without the Moran Eye Center, Dr. Crandall has been great and everybody has been so helpful,” said Paul of going abroad to participate in an ophthalmology outreach mission. “There really is a technique and talent to getting everything organized and all the equipment here. We’re really proud of the Moran Eye Center and we’re glad to be working with them.”

The Moran Eye Center has worked with several Guatemalan partners including a local hospital and government officials during the outreach mission. The institution also paired with the American Society for Cataract and Refractive Surgery and the Hope Alliance, a Utah nonprofit organization based in Park City that provides glasses and medical care to people in need in the developing world.

Providers on the trip donated their time, using vacation from work to bring their skills to help others. All said they wouldn’t have it any other way. Carolyn Chappell, a nurse at the Moran Eye Center for more than 20 years, went to Guatemala for the week, leaving behind a big family and a busy life in Utah for the week. “It gives you the sense that you are helping people. The reward is the joy on their faces and the transformation of their lives,” said Chappell. “They can work, they can take care of themselves again and they are so grateful.”

Some of those patients include people like Reyes, whose quality of life has diminished because of poor vision. He has trouble seeing when he tries to work the land he depends on for food. Daily tasks like eating and getting dressed also came with some difficulties. Doctors removed Reyes’ cataract during a Monday surgery, telling him to return on Tuesday, when a bandage would be taken off so he could experience the results. As Reyes’ bandage was peeled away, tears brimmed as he excitedly hugged his doctors and looked around to see for the first time without a cataract limiting his vision.

“When you get to heaven one day, make sure to look for me,” a joyful Reyes told MacDonald and Crandall through a translator. “My life is better because of you.” 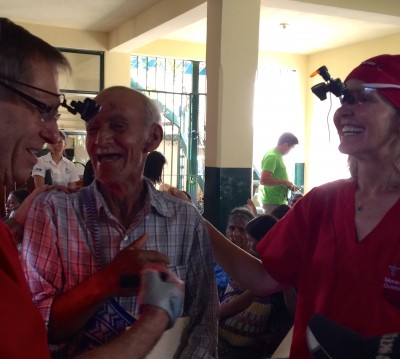 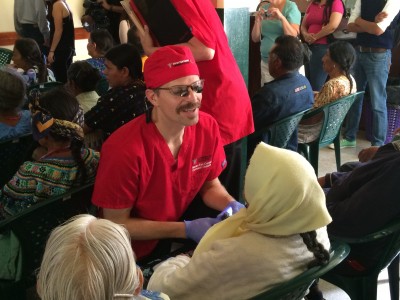 Caption: Jeff Pettey, M.D., removes bandages from a patient who received cataract surgery at the Hospital de Ojos Club de Leones in Salama, Guatemala. Pettey and others from the University of Utah’s John A. Moran Eye Center performed about 200 surgeries to people in need. Sen. Rand Paul, R-Kentucky, joined Moran doctors on the trip. 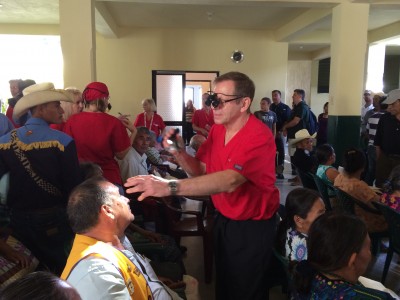 Caption: Alan Crandall, M.D., examines a patient after removing a cataract from the man’s eye a day earlier as part of an outreach mission for the University of Utah’s John A. Moran Eye Center in Salama, Guatemala. 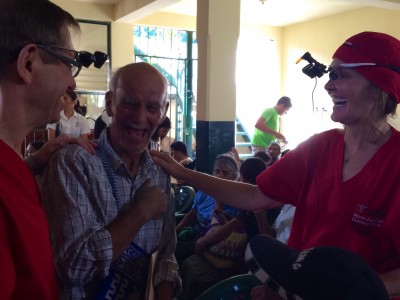 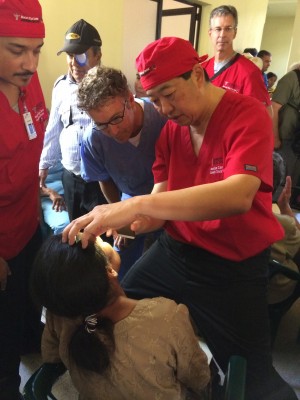