The Glass Transition Caught in the Act 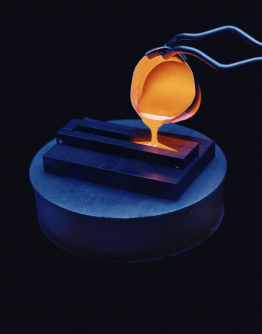 ﻿﻿Glasses form when a liquid is cooled so rapidly its atoms or molecules don't have time to find their places in the regular pattern that characterizes crystalline solids. 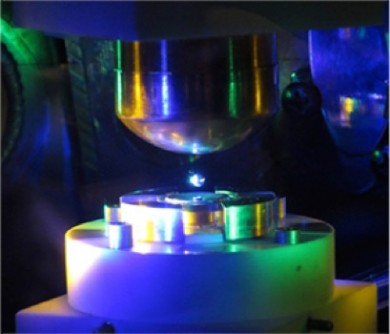 A levitated drop of a metallic liquid inside an instrument used to study the glass transition. Electrodes above and below the sample charge its surface by induction, and it rises in the evacuated chamber, hoisted by electrostatic attraction. The sample is melted by laser and then bombarded by an intense beam of X-rays produced by a synchrotron. The pattern in which the X-rays scatter contains information about the positions and interactions of the atoms in the droplet.

Newswise — We learn in school that matter comes in three states: solid, liquid and gas. A bored and clever student (we’ve all met one) then sometimes asks whether glass is a solid or a liquid.

The student has a point. Glasses are weird “solid liquids” that are cooled so fast their atoms or molecules jammed before organizing themselves in the regular patterns of a crystalline solid. So a glass has the mechanical properties of a solid but its atoms or molecules are disorganized, like those in a liquid.

Scientists hate definitions this vague, but they’ve been stuck with this one because nobody really understood the glass transition, which frequently makes it onto lists of the top-10 unsolved problems in physics.

For the most part, scientists have been able to measure only bulk properties of glass-forming liquids, such as viscosity and specific heat, and the interpretations they came up with depended in part on the measurements they took. The glass literature is notoriously full of contradictory findings and workshops about glass are the venue for lively debate.

But in the past fifteen years, new experimental setups that scatter X-rays or neutrons off the atoms in a droplet of liquid that is held without a container (which would provoke it to crystallize) have allowed scientists at long last to measure the atomic properties of the liquid. And that is the level at which they suspect the secrets of the glass transition are hidden.

In one such study, Ken Kelton, the Arthur Holly Compton Professor in Arts & Sciences at Washington University in St. Louis, and  his research team (Chris Pueblo, Washington University and Minhua Sun, Harbin Normal University, China) compared a measure of the interaction of atoms for different glass-forming liquids. Their results, published online in Nature Materials, reconcile several measures of glass formation, a sign that they are on the right track.

“We have shown that the concept of fragile and strong liquids, which was invented to explain why viscosity changes in markedly different ways as a liquid cools, actually goes much deeper than just the viscosity,” Kelton said. “It is ultimately related to the repulsion between atoms, which limits their ability to move cooperatively. This is why the distinction between fragile and strong liquids also appears in structural properties, elastic properties and dynamics. They’re all just different manifestations of that atomic interaction.”

This is the first time the connection between viscosity and atomic interactions has been demonstrated experimentally, he said. Intriguingly, his studies and work by others suggest that the glass transition begins not at the conventional glass transition temperature but rather at a temperature approximately two times higher in metallic  glasses (more than two times higher in the silicate glasses, such as window glass). It is at that point, Kelton said, the atoms first begin to move cooperatively.

Drilling down to the atomic level

Kelton’s latest discoveries follow earlier investigations of a characteristic of glass-forming liquids called fragility. To most people, all glasses are fragile, but to physicists some are “strong” and others are “fragile.”

The distinction was first introduced in 1995 by Austen Angell, a professor of chemistry at Arizona State University, who felt that a new term was needed to capture dramatic differences in the way a liquid’s viscosity increases as it approaches the glass transition.

The viscosities of some liquids change gradually and smoothly as they approach this transition. But as other liquids are cooled, their viscosity changes very little at first, but then take off like a rocket as the transition temperature approaches.

At the time, Angell could only measure viscosity, but he called the first type of liquid “strong” and the second type “fragile” because he suspected a structural difference underlay the differences that he saw,

“People argued that the change in viscosity had to be related to the structure — through several intermediate concepts, some of which are not well defined,” Kelton added. “What we did was hop over these intermediate steps to show directly that fragility was related to structure.”

In 2014, he with members of his group published in Nature Communications the results of experiments that showed that the fragility of a glass-forming liquid is reflected in something called the structure factor, a quantity measured by scattering X-rays off a droplet of liquid that contains information about the position of the atoms in the droplet.

“It was just as Angell had suspected,” Kelton said. “The rate of atomic ordering in the liquid near the transition temperature determines whether a liquid is ‘fragile’ or ‘strong.'”

But Kelton wasn’t satisfied. Other scientists were finding correlations between the fragility of a liquid and its elastic properties and dynamics, as well as its structure. “There has to be something in common,” he thought. “What’s the one thing that could underlie all of these things?” The answer, he believed, had to be the changing attraction and repulsion between atoms as they moved closer together, which is called the atomic interaction potential.

If two atoms are well separated, Kelton explained, there is little interaction between them and the interatomic potential is nearly zero. When they get closer together, they are attracted to one another for a variety of reasons. The potential energy goes down, becoming negative (or attractive). But then as they move closer still, the cores of the atoms start to interact, repelling one another. The energy shoots way up.

“It’s that repulsive part of the potential we were seeing in our experiments,” Kelton said.

What they found when they measured the repulsive potential of 10 different metallic alloys at the Advanced Photon Source, a beamline at Argonne National Laboratory, is that “strong” liquids have steeper repulsive potentials and the slope of their repulsive potential changes more rapidly that of “fragile” ones. “What this means,” Kelton said, “is that ‘strong’ liquids order more rapidly at high temperatures than ‘fragile’ ones. That is the microscopic underpinning of Angell’s fragility.

“What’s interesting,” Kelton continued, “is that we see atoms beginning to respond cooperatively — showing awareness of one another — at temperatures approximately double the glass transition temperature and close to the melting temperature.

“That’s where the glass transition really starts,” he said. “As the liquid cools more and more,  atoms move cooperatively until rafts of cooperation extend from one side of the liquid to the other and the atoms jam. But that point, the conventional glass transition, is only the end point of a continuous process that begins at a much higher temperature.”

Kelton will soon attend a workshop in Poland where he expects lively discussion of his findings, which contradict those of some of his colleagues. But he is convinced that he has hold of the thread that will lead out of the labyrinth because different levels of understanding are beginning to line up. “It’s exciting that things are coming together so well,” he said.