The Knight in Shining Armor: SJU Medievalist Recounts the Origins of Valentine's Day 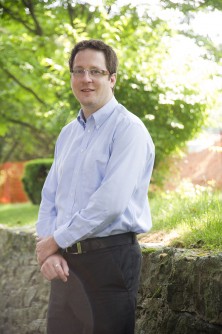 Newswise — Boxes of chocolates, bouquets of red roses and other tokens of affection: these romantic gestures have become Valentine’s Day norms. But many romantic partners might not realize that these modern practices and the beginnings of how we celebrate the lover’s holiday are steeped in the medieval period.

Paul Patterson, Ph.D., medievalist and associate professor of English, says that the holiday’s first known connection in literature with romantic love appears in a work by medieval poet Geoffrey Chaucer.

“The Parlement of Foules” is a dream poem that addresses the role of love in our lives. It focuses on a parliament of birds who gather together to choose their mates on St. Valentine’s Day. The narrator falls asleep and dreams that he encounters Venus, the goddess of love, who shows him its sorrows and joys. The dream also examines the birds’ mate-selection process and how they find a perfect suitor.

The mention of St. Valentine occurs at the end of the poem, in a song:

Patterson notes that Chaucer’s ideas in relationship to St. Valentine and love in “The Parlement of Foules” were influential to his contemporaries. The holiday as a celebration of romantic love begins to be mentioned in other works of medieval romantic literature and those well beyond the medieval period. Most notably, Ophelia in Shakespeare’s “Hamlet” acknowledges St. Valentine’s Day in the beginning of her mad scene in Act IV.

Another trope of medieval romances is the knight. Chaucer’s “The Canterbury Tales” conveys the stories of heroic knights and their acts of chivalry.

“In the tales of knights questing, they spend a lot of time thinking about romantic love and the philosophy surrounding it,” says Patterson.

These stories are noteworthy in that knights are mentioned often by authors of medieval literature such as Chrétien de Troyes, who wrote “Lancelot, The Knight of the Cart.” The knights in search of love often encounter maidens to whom they dedicate their love. As the genre grew, medieval romance gained a universal audience despite its focus on high-ranking, noble characters.

According to Patterson, today’s romantic entertainment – the rom-com – draws from medieval romance.

“In popular culture, romantic comedies carry a lot of the elements of this genre,” explains Patterson. “If you think about the characters in medieval romances, they [like many characters in contemporary love stories] are often of the upper classes. Think about ‘Love Actually.’ With their beautiful apartments and easy work schedule, the characters can freely explore their pursuit of romance.”

Patterson will further discuss medieval romance in Stuck in Middle English with You: The Medieval Roots of Valentine's Day, the third episode of “Good to Know," the Saint Joseph’s University Experts Podcast, available on Valentine’s Day, Wednesday, Feb. 14.