The Legacies of America’s First Ladies 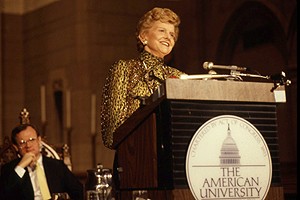 The conference, a kick off to Women’s History Month, will review the choices these women have made and the forces that have empowered, as well as challenged, their ability to help shape their work and support the President as well as the nation.

“A first lady’s role may be a mysterious to many, but these leaders behind the leaders help effect change and advance our society in valuable ways,” said Anita McBride, former chief of staff to First Lady Laura Bush, now an executive in residence at American University who organized the conference. “I’m thrilled that AU recognizes the impact first ladies have had on history and sees this as an emerging topic to study and research in the American political process.”

Representatives from the Carter, Reagan, George H.W. Bush, Clinton, George W. Bush and Obama administrations will be joined by America’s premier historians, authors, and archivists who have studied, researched and written about first ladies and White House correspondents and journalists who have covered and traveled with first ladies. Notable panelists and moderators include:

American University Professors Jane Hall, Jennifer Lawless and Connie Morella will also moderate sessions focusing on first ladies through the sweep of history, first ladies in the modern age, and covering the first lady and anticipating Madame President. For a full list of speakers and conference agenda, click here.

McBride has a distinguished career in American politics and government spanning more than 20 years and three administrations. From 2005 to 2009, she served as assistant to President George W. Bush and chief of staff to First Lady Laura Bush. She developed the first lady’s global and domestic platform in support of presidential policies and initiatives, including global health, education, historic preservation, and human rights.

The White House Historical Association, the National Archives’ Presidential Libraries, and American University’s Library are conference partners. In a rare outside gathering other than their bi-annual directors meetings, all 13 presidential library directors will attend the conference as part of their meeting in Washington.

Located in Washington, D.C., American University, recently ranked by Princeton Review as the most politically active campus, is a leader in global education, enrolling a diverse student body from throughout the United States and more than 150 countries. The university provides opportunities for academic excellence, public service, and internships in the nation's capital and around the world.