The Mechanism of Mucus: Discovery Could Lead to Better Cystic Fibrosis Treatments

University of North Carolina scientists found that mucin proteins, which make mucus thick and sticky, fail to unfold properly in the airways of people with cystic fibrosis. And they found the lack of water in the lung can trigger the misfolding mucins. 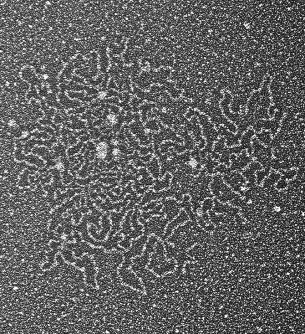 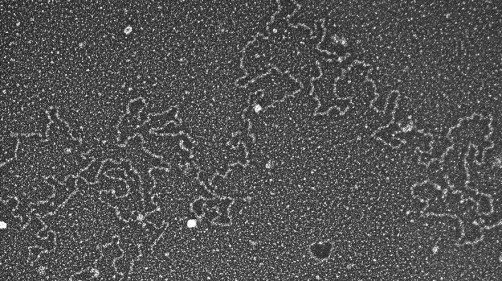 Electron microscopy of a linear mucin responsible for keeping mucus at proper thickness and stickiness.

Newswise — CHAPEL HILL, NC – People with cystic fibrosis (CF) suffer repeated lung infections because their airway mucus is too thick and sticky to keep bacteria, viruses, and other pathogens from causing chronic infection. How mucus becomes abnormal in CF airways has never been fully understood, but researchers from the UNC School of Medicine have now found a major clue, published today in JCI Insight. They determined that mucin proteins, which give mucus its gel-like properties, fail to unfold normally in CF airways, making airway mucus much more thick and sticky than it would be otherwise.

“In healthy people – after airway surface cells secrete mucins – the proteins unfold from a compact form to a more open, linear form,” said senior author Mehmet Kesimer, PhD, associate professor of pathology and laboratory medicine and member of the UNC Marsico Lung Institute. “And we found that this unfolding process is defective in CF airway epithelia.”

The findings illuminate an important underlying factor in CF and suggest that therapies targeting this abnormal compact form of mucin proteins might benefit patients.

Cystic fibrosis is a rare genetic disease that affects about 70,000 people worldwide. It occurs when a person has two defective copies of the CFTR gene, which triggers the creation of the CFTR protein. When that protein is mutated, the result is cystic fibrosis. In healthy people, CFTR allows chloride and other ions to flow out of cells, including the epithelial cells that line our airways between the throat and lungs.

“Those chloride ions essentially hold water outside the cells,” Kesimer said. “We need that water there. When that flow of chloride is reduced, the airway surfaces become dehydrated.”

For reasons that haven’t been entirely clear, the lack of water in people with CF is accompanied by a thickening and increased stickiness of the mucus layer. The sticky mucus – which is composed of many kinds of proteins – doesn’t move like it should. Pathogens, such as bacteria, become trapped in the lung. This faulty process leads to progressive lung damage and a shortened lifespan.

In prior work, Kesimer and colleagues showed that an abnormally high concentration of mucins contributes to mucus thickness and stickiness. Kesimer and his team also had demonstrated that mucin proteins, under ordinary circumstances, are secreted from cells in a tightly packed form – because they are so large – and then they unfold rapidly into elongated, linear molecules, giving mucus the consistency it needs to clear airway surfaces and protect the lungs.

In the new study, Kesimer and his team found evidence that this mucin unfolding process fails to occur normally in CF airways. In healthy epithelial human cells or in human saliva, mucin proteins – particularly the dominant one called MUC5B – typically morph into more open, linear forms within a few minutes to a few hours of being secreted. By contrast, MUCB5 from CF cells usually remained in a compact form. Electron microscopy revealed an abnormally dense structure for the MUCB5 secreted by CF cells.

Then Kesimer’s lab took their work a step further. Using normal human cells, researchers simply blocked the flow of chloride ions from the cells. This meant that the watery layer lining the airway surface was reduced. This resulted in mucin proteins persisting in their compact form. This blockage of airway surface hydration also triggered increased concentration of MUCB5.

This work suggests that depletion of the normal water layer on airway surfaces is the principal reason why MUCB5 fails to unfold normally.

Kesimer said, “We did experiments with saliva, primary human cells, and even the tracheas of pigs, and they all indicated that dehydration is the critical factor.”

This work suggests therapies to rehydrate the airway lining might restore normal MUCB5 function and thin out the mucus sufficiently to provide a benefit for patients. Clinical trials already have found evidence that inhaled hypertonic saline – sterile salty water, which helps restore a normal ionic balance to the airway and rehydrate it – thins mucus and slows the decline of lung function.

Also, researchers are targeting chemical bonds within mucin proteins. This approach may break up the abnormally large and dense forms of MUCB5 into smaller fragments to benefit CF patients.

Kesimer and colleagues now have more evidence that it is the mucins that matter most, and the key to the mucins is the watery layer upon which the mucus glides. 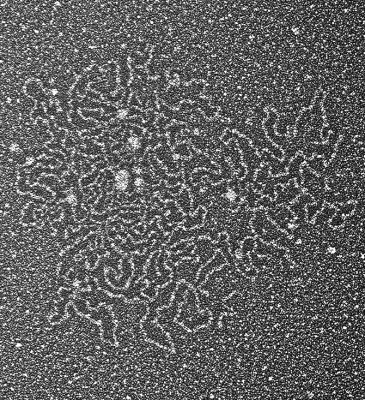 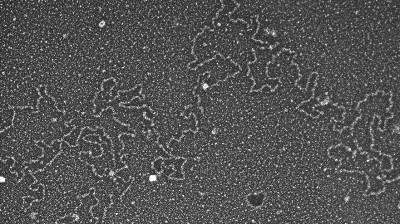 Caption: Electron microscopy of a linear mucin responsible for keeping mucus at proper thickness and stickiness.