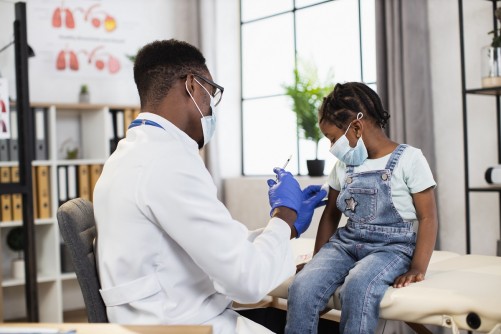 Newswise — The Penn State Health Pediatrics team has a collection of Bugs Bunny Band-Aids to offer the recently vaccinated. And they don’t call the injections shots. Some call them “little pinches.” We’re going to put a little medicine in your leg and you could feel a little pinch, they might say.

There’s good reason for the subterfuge. Nobody enjoys a date with a needle, whether you’re a grown-up or a little kid. Dr. Katherine Shedlock, a pediatrician, and her fellow caregivers have become experts at keeping the experience positive.

But their payoff couldn’t be any bigger. “Your child would be in much more pain if they actually got the infection,” Shedlock tells parents who are sometimes more uncomfortable than the children. “You’re actually saving them a lot of pain.”

What’s actually in store for you and your child when you schedule them for vaccines recommended by pediatricians?

How many infections do childhood vaccines prevent?

Seventeen. Check out the full schedule for kids and adolescents from the U.S. Centers for Disease Control and Prevention (CDC). The list was developed in cooperation between CDC, the American Academy of Pediatrics, the Advisory Committee on Immunization Pediatrics and other organizations. It covers a range of maladies from chickenpox to polio. And yes, the list includes the COVID-19 vaccine.

No. In many cases, the vaccines are combined in one shot and some are given when the child is older. For example, one inoculation includes diphtheria, tetanus, Hepatitis B, whooping cough and others all in the same injection. One – the vaccine against rotavirus – is actually administered orally.

When should we start giving the vaccines?

The bulk of the immunizations are administered within the first two years. The schedule calls for pediatricians to administer vaccines soon after birth, at two months, four months, six months, 12 months, 15 months and 24  months. Doctors usually schedule these to coincide with regular well-baby exams.

Additional sets are due at ages 4 and 11. Finally, a booster to protect against meningitis is scheduled for age 16.

“The vaccine schedule is updated every year and based on the most current research,” Shedlock said.

That said, exactly which shots are scheduled for when can vary from clinic to clinic, depending on the brand of the vaccine. Different manufacturers have different requirements.

In general, however, it’s best to start immediately with the first vaccine in the newborn nursery and the next vaccines at two months. Their immune systems are immature and they are susceptible to serious disease, such a meningitis, Shedlock said.

What happens if I miss a shot on the schedule?

For many shots, you can pick up again out of sequence. It’s possible your child will be too old to get others. Talk to your pediatrician.

Severe reactions to vaccine are extremely rare – one to two people per million may have an allergic reaction, according to the U.S. Department of Health and Human Services.

Every vaccine is different. Some include weakened versions of the virus they’re protecting against. Others can include particles of viruses, but you can’t get the infection from them, Shedlock said. They allow you to develop antibodies in your blood that protect you against infection.

Why are we doing this? Won’t herd immunity protect my child from these illnesses?

“Herd immunity is just not good enough ― especially if not enough people are vaccinated,” Shedlock said.

Herd immunity, which can stop the spread of a disease if enough people have antibodies in their blood because they’ve either been infected or vaccinated against it, won’t work if the percentages are off. You can’t depend upon it, and the risks of infection are too great.

Take the highly contagious disease, measles. Unvaccinated, one out of every 20 children with measles will develop pneumonia, according to CDC data. One child out of every 1,000 will develop encephalitis, leading to deafness or intellectual disabilities. One to three in 1,000 will die. In adults, the illness can also cause complications during pregnancy that can lead to premature births.

Since the introduction of the vaccine in the early 1960s, the number of people reporting that they contracted the illness is usually in the hundreds. In 2019, cases of the disease spiked at 1,274 cases in 31 states – the biggest jump in nearly 30 years. The majority of those cases were among unvaccinated people.

So far in 2022, there have been six reported cases of measles.

What side effects can I expect?

They don’t happen to everyone, and “they are similar for all of the childhood vaccines,” Shedlock said. They can include a low-grade fever of less than 102 degrees. They might notice pain or swelling at the injection site, which can make younger children irritable.

How can I prepare my child for a shot?

You can get younger children ready for their “little pinches” by offering them a treat after they get their shot. Be honest with them, let them know you’re protecting them. Hold them. Some of the professionals at Shedlock’s office offer those Bugs Bunny Band-Aids. And once the shot is done, they applaud. “Yay! You’re all done!”

“You always make the choices that are best to protect your children and your family,” she tells them. “I don’t want you in any way to feel guilty. It’s important to your child. They will be in much more pain if they get the actual infection.”