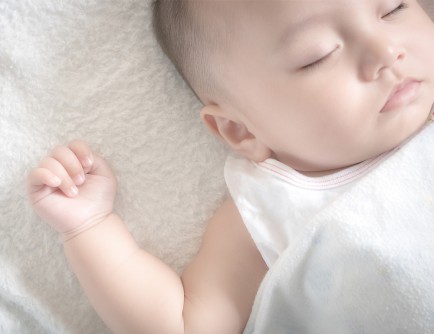 Newswise — The number of infants who develop flat head syndrome — deformational plagiocephaly – has increased significantly since the start of the Back to Sleep campaign to combat Sudden Infant Death Syndrome (SIDS) in the 1990s.

“The Back to Sleep campaign is saving lives, but it has created a new problem,” said Dr. Mark Dias, director of pediatric neurosurgery for Penn State Children's Hospital.

The good news is that the condition doesn’t have consequences beyond cosmetics, and it can often be improved – if it doesn’t resolve on its own.

One in 300 infants will develop flat-head syndrome during the first several weeks of life from spending a lot of time lying on the back of their head. “The earlier you can catch it, the better, so it’s important for people to know about it,” Dias said.

When parents or pediatricians note the condition, they can improve it by encouraging positional changes. Dias suggests placing interesting items on the opposite side of a room or bed to encourage head movement. If the baby is awake, supervised tummy time is good.

Or, caregivers can use a rolled-up towel or receiving blanket slid under one side of the back between the buttocks and shoulders to tilt the baby’s head a bit to the side. Once the infant has good head control, use of a Bumbo seat can keep them propped up without their head resting against something.

Keeping car seat and swing time limited to when the infant is actually traveling in a car or swinging will also help minimize the amount of time the baby puts weight on the back of their head.

In more severe cases, helmets may be used to try to reshape the head.

Despite the fact that Dias knew of the condition and has written articles about it, his own son – now age 19 and perfectly fine – developed flat-head syndrome after birth. His son also had a condition called torticollis, which is a restriction of neck movement resulting from scar tissue in the muscles of the neck.

Torticollis occurs in 15-20 percent of children with deformational plagiocephaly and results in an inability to turn the head in one direction. Physical therapy can be useful for teaching parents exercises that can help stretch out the neck muscles.

Dias warns parents that much of what they read online about flat-head syndrome has no scientific basis. “People say it can be the cause of all sorts of other things, but there is no medical evidence that it causes anything other than cosmetic implications,” he said.

The condition is also often confused with the more serious craniosynostosis – abnormal fusion of the skull bones – which also results in changes in the shape of an infant’s head, but does not improve with positional changes or use of a helmet.

”In those cases, you need surgery to break apart the skull and free up the bones where they have fused,” Dias said. “Deformational plagiocephaly, on the other hand, does not require surgery.”