The Medical Minute: Is It a Bad Cold or RSV? 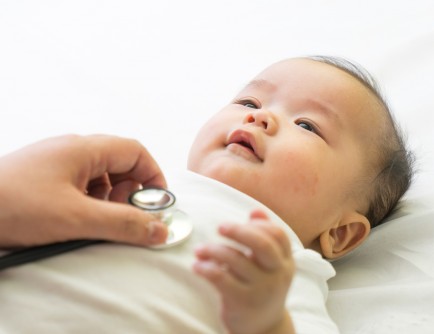 Newswise — Kids get colds – sometimes, lots of them. But when runny noses and coughs turn into trouble breathing, the problem could indicate RSV, or respiratory syncytial virus.

He said RSV and influenza are typically the most common reasons children see a doctor during the winter months.

While initial symptoms look much like those of any other cold, children with RSV may start breathing faster or wheezing three to five days after coming down with the cold. Sometimes, appetite decreases, the child may be irritable or lethargic, and have a fever.

When breathing troubles begin, parents should take the child to the doctor where a sampling of nasal secretions can test for the virus. “Identifying RSV as the cause of the infection reassures the doctor that antibiotics are not needed,” McSherry said.

The infection causes the most problems for infants who are just a few weeks old through six months of age because their airways are smaller. When the airways become inflamed and mucus secretions increase, the children can find themselves struggling to breathe.

Although there is no treatment for RSV, some children who are diagnosed with it may need to be hospitalized so they can get supportive care such as oxygen treatment and suctioning of the upper airways.

Some children are more susceptible than others to developing RSV lower respiratory infections like bronchiolitis or pneumonia. Those include premature infants in the first year or two of life with chronic lung disease and infants with certain types of congenital heart disease. “Those parents need to be closely in touch with their primary care providers,” McSherry suggested.

Dr. Jay Zimmermann, a family medicine physician at Penn State Health Milton S. Hershey Medical Center, said RSV doesn't affect adults to the degree it does children. "Our airways are larger and it doesn't tend to affect the lower respiratory tract or lungs in adults," he said.

Parents, however, can unsuspectingly pass it to their young children since those who get the virus can be contagious for up to 20 days after infection. The extra immunity provided by breast milk can help some young children ward off the virus, but Zimmermann said the best prevention is the same as with any cold – good hygiene, including hand washing and sneezing into an elbow.

“When a child is admitted to the hospital because of RSV,” he said. “It can be disruptive and a big strain on the health and wellbeing of the entire family.”