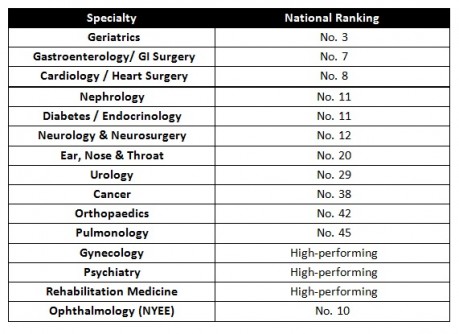 The Mount Sinai Hospital named to the “Honor Roll” of US News & World Report Best Hospitals in AmericaTop ranked in ten medical specialties: NYEE of Mount Sinai is ranked #10 nationally in Ophthalmology Newswise — (New York – August 2) The Mount Sinai Hospital has achieved “Honor Roll” status in this year’s U.S. News & World Report “Best Hospitals” guidebook. Mount Sinai was ranked 15th in the nation, out of 20 hospitals on the Honor Roll and approximately 5,000 evaluated by U.S. News. Seven Mount Sinai Hospital departments ranked among the top 20 nationally in their specialties, and four others were among the top 50. The New York Eye and Ear Infirmary of Mount Sinai was also ranked nationally, No. 10 in Ophthalmology. "We are extremely proud of our U.S. News rankings, which validate our commitment to innovation, collaboration, and team approach to personalized patient care," said Kenneth L. Davis, MD, CEO and President of the Mount Sinai Health System. "This is an exciting time for Mount Sinai as we continue to shape health care delivery, develop groundbreaking therapies and treatments, and continue to recruit and retain top physicians, researchers, and medical staff." The Mount Sinai Hospital received top-20 rankings in the following specialties: Geriatrics (No. 3), Gastroenterology/GI Surgery (No. 7), Cardiology/Heart Surgery (No. 8), Diabetes/Endocrinology (No. 11), Nephrology (No. 11), Neurology/Neurosurgery (No. 12), and Ear, Nose, and Throat (No. 20). Ranking in the top 50 were Urology (No. 29), Cancer (No. 38), Orthopedics (No. 42), and Pulmonology (No. 45). The hospital was also recognized as “high performing” in Gynecology, Psychiatry, and Rehabilitation. “Mount Sinai has a legacy of groundbreaking scientific discoveries that have led to improved methods of diagnosing and treating human disease,” said Dennis S. Charney, MD, Anne and Joel Ehrenkranz Dean, Icahn School of Medicine at Mount Sinai, and President for Academic Affairs, Mount Sinai Health System. “Our outstanding physicians and scientists ensure that we will continue to be at the cutting edge of biomedical science and clinical excellence.” "We congratulate the staff of The Mount Sinai Hospital on their dedication to quality, safety, and service in treating our patients in our community and beyond," said David L. Reich, MD, President and Chief Operating Officer of The Mount Sinai Hospital and the Horace W. Goldsmith Professor of Anesthesiology, Icahn School of Medicine at Mount Sinai. “These national rankings are the result of their exceptional care and efforts, and I remain confident that our staff will continue to receive high recognition in the years to come.” Along with the New York Eye and Ear Infirmary of Mount Sinai, hospitals of the Mount Sinai Health System that received national recognition in the “Best Hospitals” rankings were: · Mount Sinai Beth Israel, ranked as High Performing in Neurology/Neurosurgery. · Mount Sinai St. Luke’s/Mount Sinai West, ranked as High Performing in Neurology/ Neurosurgery and Nephrology. Additionally, The Mount Sinai Hospital was ranked third regionally in both the New York City and New York metro area, and Mount Sinai Beth Israel and Mount Sinai St. Luke’s/Mount Sinai West were all ranked 19th regionally and 22nd in the New York metro area, respectively. Go to http://health.usnews.com/best-hospitals to view the 2016-2017 edition of “Best Hospitals.” About the Mount Sinai Health System

The Mount Sinai Health System is an integrated health system committed to providing distinguished care, conducting transformative research, and advancing biomedical education. Structured around seven hospital campuses and a single medical school, the Health System has an extensive ambulatory network and a range of inpatient and outpatient services—from community-based facilities to tertiary and quaternary care. The System includes approximately 7,100 primary and specialty care physicians; 12 joint-venture ambulatory surgery centers; more than 140 ambulatory practices throughout the five boroughs of New York City, Westchester, Long Island, and Florida; and 31 affiliated community health centers. Physicians are affiliated with the renowned Icahn School of Medicine at Mount Sinai, which is ranked among the highest in the nation in National Institutes of Health funding per investigator. The Mount Sinai Hospital is ranked as one of the nation’s top 10 hospitals in Geriatrics, Cardiology/Heart Surgery, and Gastroenterology, and is in the top 25 in five other specialties in the 2014-2015 “Best Hospitals” issue of U.S. News & World Report. Mount Sinai’s Kravis Children’s Hospital also is ranked in seven out of ten pediatric specialties by U.S. News & World Report. The New York Eye and Ear Infirmary of Mount Sinai is ranked 11th nationally for Ophthalmology, while Mount Sinai Beth Israel is ranked regionally. For more information, visit http://www.mountsinai.org/, or find Mount Sinai on Facebook, Twitter and YouTube.