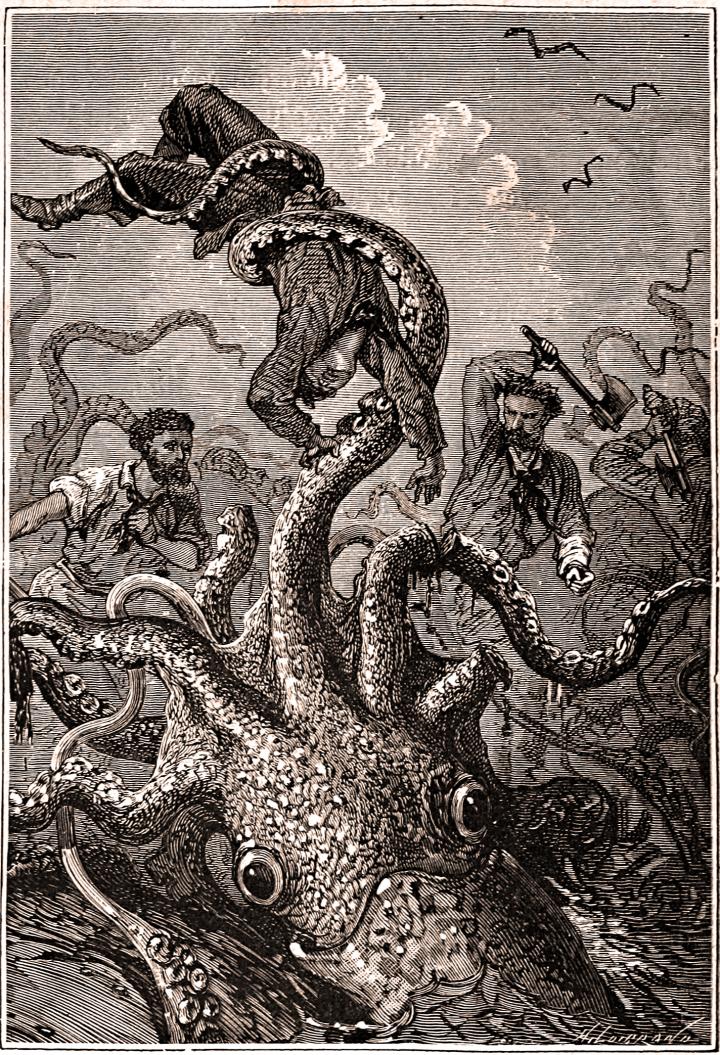 The giant squid has long been a subject of horror lore. In this original illustration from Jules Verne's '20,000 Leagues Under the Sea,' a giant squid grasps a helpless sailor.

Newswise — WOODS HOLE, Mass. -- How did the monstrous giant squid - reaching school-bus size, with eyes as big as dinner plates and tentacles that can snatch prey 10 yards away -- get so scarily big?

Today, important clues about the anatomy and evolution of the mysterious giant squid (Architeuthis dux) are revealed through publication of its full genome sequence by a University of Copenhagen-led team that includes scientist Caroline Albertin of the Marine Biological Laboratory (MBL), Woods Hole.

Giant squid are rarely sighted and have never been caught and kept alive, meaning their biology (even how they reproduce) is still largely a mystery. The genome sequence can provide important insight.

"In terms of their genes, we found the giant squid look a lot like other animals. This means we can study these truly bizarre animals to learn more about ourselves," says Albertin, who in 2015 led the team that sequenced the first genome of a cephalopod (the group that includes squid, octopus, cuttlefish, and nautilus).

Led by Rute da Fonseca at University of Copenhagen, the team discovered that the giant squid genome is big: with an estimated 2.7 billion DNA base pairs, it's about 90 percent the size of the human genome.

Albertin analyzed several ancient, well-known gene families in the giant squid, drawing comparisons with the four other cephalopod species that have been sequenced and with the human genome.

She found that important developmental genes in almost all animals (Hox and Wnt) were present in single copies only in the giant squid genome. That means this gigantic, invertebrate creature - long a source of sea-monster lore - did NOT get so big through whole-genome duplication, a strategy that evolution took long ago to increase the size of vertebrates.

So, knowing how this squid species got so giant awaits further probing of its genome.

"A genome is a first step for answering a lot of questions about the biology of these very weird animals," Albertin said, such as how they acquired the largest brain among the invertebrates, their sophisticated behaviors and agility, and their incredible skill at instantaneous camouflage.

"While cephalopods have many complex and elaborate features, they are thought to have evolved independently of the vertebrates. By comparing their genomes we can ask, 'Are cephalopods and vertebrates built the same way or are they built differently?'" Albertin says.

Albertin also identified more than 100 genes in the protocadherin family -- typically not found in abundance in invertebrates -- in the giant squid genome.

"Protocadherins are thought to be important in wiring up a complicated brain correctly," she says. "They were thought they were a vertebrate innovation, so we were really surprised when we found more than 100 of them in the octopus genome (in 2015). That seemed like a smoking gun to how you make a complicated brain. And we have found a similar expansion of protocadherins in the giant squid, as well."

Lastly, she analyzed a gene family that (so far) is unique to cephalopods, called reflectins. "Reflectins encode a protein that is involved in making iridescence. Color is an important part of camouflage, so we are trying to understand what this gene family is doing and how it works," Albertin says.

"Having this giant squid genome is an important node in helping us understand what makes a cephalopod a cephalopod. And it also can help us understand how new and novel genes arise in evolution and development."

The Marine Biological Laboratory (MBL) is dedicated to scientific discovery - exploring fundamental biology, understanding marine biodiversity and the environment, and informing the human condition through research and education. Founded in Woods Hole, Massachusetts in 1888, the MBL is a private, nonprofit institution and an affiliate of the University of Chicago.