The Olin College Class of 2020 Moves-In 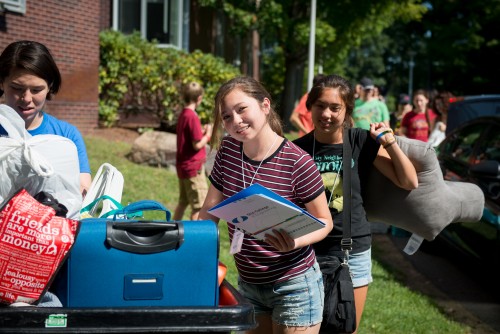 Newswise — Move-in day for the Class of 2020 officially kicked off with the ringing of the traditional bell. Students from across the country and around the world gathered in Milas Hall to receive Orientation packets and then head behind the residence halls to begin the long and, on this day, hot process of unloading their gear, meeting roommates and moving in to their assigned rooms.

In all, the students represent 5 countries, 30 states and the District of Columbia. Nine of the first years are first generation college students and 47 percent are female.

Among the students moving in on this hot summer day was Lacie Fradet from Altadena, California, who was stringing lights up in her new room with her sisters and parents.

The sisters are triplets and this was the first time they would be away from home for an extended period of time. “We’ve shared a room our whole lives,” said Lacie Fradet. “But it’s time to be our own people.” Lacie’s mother said her hopes for her daughter were quite simple, “I hope she finds her passion and finds out who she is.”

Also putting her things away in a room down the hall was Aurora Bunten of Marco Island, Florida. In addition to her interest in electrical and computer engineering, Bunten is a musician and plans to continue playing her guitar in the Boston area after she gets settled. Bunten said she would miss her cats and her parents, although not necessarily in that order.

The students are an academically impressive group, as well as diverse in their interests and talents, as Dean of Admission and Financial Aid Emily Roper-Doten made clear when she welcomed the next generation of engineering leaders and their families at a talk in the dining hall on Saturday afternoon.

Roper-Doten revealed just some of the impressive accomplishments the Class of 2020 is known for. One student has scaled Mount Kilimanjaro, two students are pilots and another student coauthored a published paper that pointed to the possibility of primordial life on Mars.

After her talk, Roper-Doten officially “presented” the Class of 2020 to Olin College’s Provost and Dean of Faculty Vincent Manno. In his talk to the assembled group, Manno explained that the Olin community is a special place where students are not only learners but partners with faculty in their own education.

As the day wore on families and students continued to cycle in and out of the residence halls, unpacking bags, hanging pictures and in many cases, trying to avoid a final good-bye.

Mark Alhadeff and Sherry Davis from New York were on hand to help their son Daniel move in. “They rang a bell to start off the registration and like Pavlov’s dog tears starting coming out of my eyes,” said Alhadeff. “They are tears of happiness. I am very excited and very proud of my son that he is going to the premier engineering institution in the world.” Alhadeff added that he hopes his son “learns how to learn” and graduates to become one of the next generation of innovators.

Throughout the floors and rooms in East and West hall, similar sentiments were echoed by parents from Portland to Pennsylvania.