The one ring — to track your finger’s location 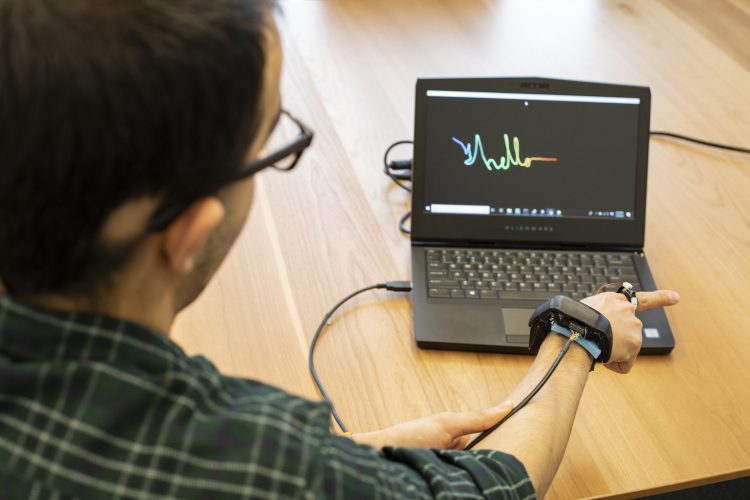 Researchers at the University of Washington have created AuraRing, a ring (foreground) and wristband (background) combination that can detect the precise location of someone's index finger — and continuously track hand movements. 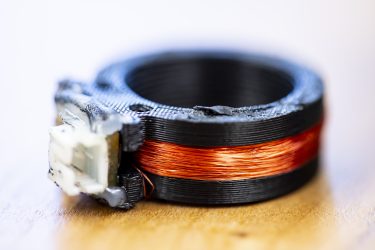 With continuous tracking, AuraRing can pick up handwriting — potentially for short responses to text messages.

The one ring — to track your finger's location

Newswise — Smart technology keeps getting smaller. There are smartphones, smartwatches and now, smart rings, devices that allow someone to use simple finger gestures to control other technology.

Researchers at the University of Washington have created AuraRing, a ring and wristband combination that can detect the precise location of someone's index finger and continuously track hand movements. The ring emits a signal that can be picked up on the wristband, which can then identify the position and orientation of the ring — and the finger it's attached to. The research team published these results Dec. 11 in Proceedings of the ACM on Interactive, Mobile, Wearable and Ubiquitous Technologies.

"We're thinking about the next generation of computing platforms," said co-lead author Eric Whitmire, who completed this research as a doctoral student at the Paul G. Allen School of Computer Science & Engineering. "We wanted a tool that captures the fine-grain manipulation we do with our fingers — not just a gesture or where your finger's pointed, but something that can track your finger completely."

AuraRing is composed of a coil of wire wrapped 800 times around a 3D-printed ring. A current running through the wire generates a magnetic field, which is picked up by three sensors on the wristband. Based on what values the sensors detect, the researchers can continuously identify the exact position of the ring in space. From there, they can determine where the user's finger is located.

"To have continuous tracking in other smart rings you'd have to stream all the data using wireless communication. That part consumes a lot of power, which is why a lot of smart rings only detect gestures and send those specific commands," said co-lead author Farshid Salemi Parizi, a doctoral student in electrical and computer engineering. "But AuraRing's ring consumes only 2.3 milliwatts of power, which produces an oscillating magnetic field that the wristband can constantly sense. In this way, there's no need for any communication from the ring to the wristband."

With continuous tracking, AuraRing can pick up handwriting — potentially for short responses to text messages — or allow someone to have a virtual reality avatar hand that mimics what they're doing with their actual hand. In addition, because AuraRing uses magnetic fields, it can still track hands even when they are out of sight, such as when a user is on a crowded bus and can't reach their phone.

"We can also easily detect taps, flicks or even a small pinch versus a big pinch," Salemi Parizi said. "This gives you added interaction space. For example, if you write 'hello,' you could use a flick or a pinch to send that data. Or on a Mario-like game, a pinch could make the character jump, but a flick could make them super jump."

The researchers designed AuraRing to be ready to use as soon as it comes out of the box and not be dependent on a specific user. They tested the system on 12 participants with different hand sizes. The team compared the actual location of a participant's finger to where AuraRing said it was. Most of the time, the system’s tracked location agreed with the actual location within a few millimeters.

This ring and wristband combination could be useful for more than games and smartphones, the team said.

"Because AuraRing continuously monitors hand movements and not just gestures, it provides a rich set of inputs that multiple industries could take advantage of," said senior author Shwetak Patel, a professor in both the Allen School and the electrical and computer engineering department. "For example, AuraRing could detect the onset of Parkinson's disease by tracking subtle hand tremors or help with stroke rehabilitation by providing feedback on hand movement exercises."

The technology behind AuraRing is something that could be easily added to smartwatches and other wristband devices, according to the team.

"It's all about super powers," Salemi Parizi said. "You would still have all the capabilities that today’s smartwatches have to offer, but when you want the additional benefits, you just put on your ring."

This research was funded by UW Reality Lab, Facebook, Google and Futurewei.

Caption: Researchers at the University of Washington have created AuraRing, a ring (foreground) and wristband (background) combination that can detect the precise location of someone's index finger — and continuously track hand movements.

Caption: With continuous tracking, AuraRing can pick up handwriting — potentially for short responses to text messages.

Proceedings of the ACM on Interactive, Mobile, Wearable and Ubiquitous Technologies