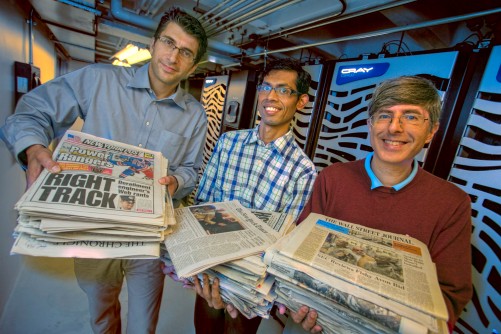 Newswise — STONY BROOK, NY, EMBARGO: October 1, 2015 @ 12 AM/EDT – Mirroring a major problem in society at large, women are significantly shortchanged when it comes to media coverage, with men being mentioned in the news a whopping five times more than women. This is the major finding of a first-of-its-kind study by Stony Brook University researchers. The paper, titled “A Paper Ceiling: Explaining the Persistent Underrepresentation of Women in Printed News,” is to be published in the American Sociological Review on October 1.

In the 21st Century women continue to receive substantially less media coverage than men, despite women’s much increased participation in public life. Women are closing the gender gap in many social fields and sometimes even outperform their male counterparts, such as in college graduation rates. Yet when you read a name on a news website or hear a name on the radio, the odds are 5 to 1 that it refers to a man. Why are women muffled in the media? It's a question that social scientists have grappled with for decades.

Essentially, the researchers found the answer when they distinguished between famous individuals who appear regularly in the news and obscure individuals who make the news only once or twice. Among obscure individuals, they found near-parity, with a female name for almost every male name. Women are outnumbered only at high levels of coverage, among individuals at the top of social hierarchies, who are mostly men: CEOs, congressmen, movie directors, and the like. And because these famous individuals account for most of the name occurrences in the news, the overall coverage difference between women and men has remained so wide.

"Contrary to claims made by earlier researchers, women’s coverage does not noticeably pick up when male editors are replaced by female editors,” said Arnout van de Rijt, Associate Professor of Sociology and the Institute for Advanced Computational Science at Stony Brook University and co-author of the study. “This study also found women’s coverage to be no greater in news produced by liberal media organizations.”

Stony Brook University researchers used a unique news data analysis system involving computational science that led them to their findings. The system was developed by Steven Skiena, Professor of Computer Science at Stony Brook University. Professor Skiena and graduate student Vivek Kulkarni, both co-authors of the study, used this system to aggregate the millions of occurrences of female and male names across scanned issues and digital records of thousands of newspapers, magazines and online news sources between 1983 and 2009, breaking these down by newspaper section, slant and organizational gender make-up.

Based on this research method and the overall findings, Van de Rijt concludes that “the persistent gender gap in media coverage is thus produced by a toxic mix of two ingredients: (1) the obsession of media with leaders at the expense of everyone else, and (2) the well-known ‘glass ceiling’ that continues to block off working women's access to leadership positions.”