The Physics of Beer Tapping

Fluid Dynamics Explains Why Bottled Beer Bubbles Over When Tapped 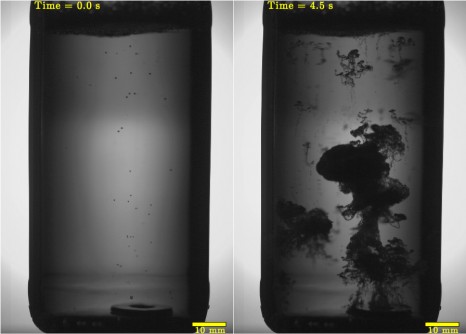 A chain of physical phenomena occurring after your bottle is hit leads to a well-know consequence: your beer quickly turns into foam.

Newswise — WASHINGTON D.C. Nov. 24, 2013 -- An old, hilarious if somewhat juvenile party trick involves covertly tapping the top of someone's newly opened beer bottle and then standing back as the suds foam out onto the floor.

Now researchers from Carlos III University in Madrid, Spain and Universite Pierre et Marie Curie, Institut Jean le Rond d'Alembert, France, have produced new insight into the science behind foaming beer bottles by exploring the phenomenon of cavitation. They present their explanation at the annual meeting of the American Physical Society (APS) Division of Fluid Dynamics.

Cavitation, a phenomenon relevant to such common engineering concerns as erosion of ship propellers, is the mechanism by which bubbles appear in a liquid such as beer after an impact, said Javier Rodriguez-Rodriguez, the lead researcher from Carlos III University.

After a sudden impact against a bottle’s mouth, back and forth movement of compression and expansion waves will cause bubbles to appear and quickly collapse. The team's investigation of beer bottle-fluid interactions demonstrated that the cavitation-induced break-up of larger “mother” bubbles creates clouds of very small carbonic gas "daughter bubbles," which grow and expand much faster than the larger mother-bubbles from which they split. The rapid expansion of these daughter bubbles gives the foam buoyancy.

“Buoyancy leads to the formation of plumes full of bubbles, whose shape resembles very much the mushrooms seen after powerful explosions," Rodriguez-Rodriguez explained. "And here is what really makes the formation of foam so explosive: the larger the bubbles get, the faster they rise, and the other way around." He adds that this is because fast-moving bubbles entrain more carbonic gas.

The team's work is believed to be the first quantitative analysis of the beer bottle foamover. "We wanted to explain the extremely high efficiency of the degasification process that occurs in a beer bottle within the first few seconds after the impact," Rodriguez said.

Beyond happy-hour enrichment, the study's findings can be applied to other engineering systems and serious natural phenomena such as the sudden release of dissolved carbon dioxide in the Lake Nyos disaster.

REGISTERING AS PRESSAny credentialed journalist, full-time or freelance, may attend the conference free of charge. Please email: [email protected] and include "DFD Press" in the subject line. Work space will be provided on-site during the meeting and news and graphics will be hosted on the Virtual Press Room: http://www.aps.org/units/dfd/pressroom/press.cfm