The Physics of Ocean Undertow

Small Forces Make a Big Difference in Beach Erosion, According to New Article in Physics of Fluids, which May Lead to Better Solutions for Sustainable Beaches 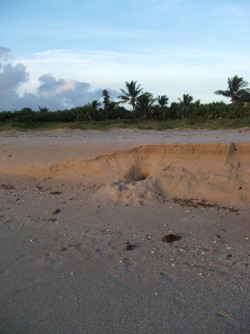 Newswise — WASHINGTON D.C. May 13, 2014 -- People standing on a beach often feel the water tugging the sand away from under their feet. This is the undertow, the current that pulls water back into the ocean after a wave breaks on the beach.

Large storms produce strong undertows that can strip beaches of sand. By predicting how undertows interact with shorelines, researchers can build sand dunes and engineer other soft solutions to create more robust and sustainable beaches.

"Formulation of the Undertow Using Linear Wave Theory," a new paper in the journal Physics of Fluids, clears up some of the controversy in undertow modeling, so planners can assess erosion threats faster and more accurately.

The paper's authors are coastal engineer Greg Guannel of the Natural Capital Project, which seeks smarter ways to integrate natural resources into development, and Tuba Ozkan-Haller, an associate professor of coastal engineering at Oregon State University.

Researchers have studied undertow for more than 40 years, and have developed very accurate models of its behavior. The most sophisticated ones are based on Navier-Stokes equations, which describe fluid flow in exquisite detail.

Unfortunately, such precision comes at a price. The mathematics are complex and it takes powerful supercomputers to run them quickly.

"You can't use them to solve day-to-day erosion problems," Guannel said.

For real-world use, researchers need mathematical shortcuts, the engineering equivalent of rounding numbers so they are easier to work with. Researchers turn to linear wave theory, which simplifies things by using idealized forms. Beaches, for example, are wall. Waves are given perfect "S" shapes based on average properties. Instead of modeling everything, researchers make assumptions about some of the weaker forces acting on waves.

"We try to come up with a set of equations that describes flow properties in one step, rather than hundreds of steps, so we can solve problems faster," Guannel said.

Several research teams, each with its own approach, built simplified models based on linear theory. And each came up with a different solution.

This bothered Guannel, who said, "If you start with a single theory, no matter how you approach the problem, you should come up with only one solution, not many."

So Guannel and Ozkan-Haller retraced the work of each team. They found their differences were not due to approach, but to the way they handled weak forces generated by waves. They then developed more consistent ways to describe those forces. The strongest of them was the force exerted by water moving from the top of the wave to the bottom.

"A major advance in our paper was to describe that force correctly," Guannel said.

"We found that all the differences between researchers were due to the erroneous formulation or the neglect of these weak terms. When we add them back in, everyone who did the math correctly comes up with the same solution," he said.

Instead of debating methodology, researchers can now focus on improving the accuracy of their models. If they can do this, Guannel said, they can build better models to help preserve the shoreline and enable beaches to recover faster after storms.

ABOUT THE JOURNALPhysics of Fluids is devoted to the publication of original theoretical, computational, and experimental contributions to the dynamics of gases, liquids, and complex or multiphase fluids. See: http://pof.aip.org