The Price of Chaos: A New Model Virtually Pits New Investors Against Experienced Ones

A new model for asset pricing draws on chaos theory to better understand how different types of individual investors lead to bull and bear markets. 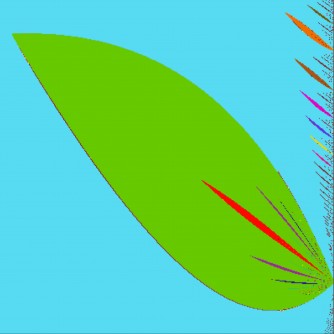 Newswise — WASHINGTON, D.C., May 22, 2018 -- Financial investing attracts a range of casual neophytes to Wall Street financiers. Variation in expertise and risk-taking behaviors among investors regularly sends markets on roller-coaster rides. Most existing economic theories cannot account for this variability, but new research in chaos theory looks to help us to understand the human factors behind investing.

An international team of researchers describes the intricate dynamics driving a financial markets model in the journal Chaos, from AIP Publishing. Their model takes aim to simulate asset pricing when mixed groups of investors enter a market. By examining bifurcation conditions -- key points at which the behavior of the virtual market changes substantially -- the team described transitions between different chaotic dynamical regimes. They showed that their model can reflect the nature of real markets by switching between bear and bull dynamics.

“With respect to financial markets, for the moment, it is still not well understood why they are so volatile,” said Frank Westerhoff, an author of the paper. “By providing novel explanations for certain puzzling features of asset price dynamics, we hope to foster an understanding of how financial markets function in general.”

The rational expectations hypothesis has been a longstanding tool for predicting financial markets. The hypothesis assumes that investors and speculators are armed with the same tools, information and habits. While this allows for a simpler analysis, those assumptions have not been confirmed by real-life, empirical observations.

Instead, the team developed a model that builds on a growing body of literature that considers speculators as heterogeneous. Additionally, their model examines how changing factors in financial markets, like how intensely different groups of investors trade, affect the prices of simulated assets.

When the researchers used dynamical patterns that corresponded to regular behavior, such as staying fixed or cycling, their model could predict a series of price values over time. However, under certain parameters, like introducing chaotic behavior, asset prices became nearly unpredictable.

Another peculiarity appeared in the model: The function that describes its dynamics makes a “jump” in two points. This implies the possibility for two different chaotic actors to coexist. This means that slight shifts in the initial price can arrive at two very different dynamical patterns under the same set of dynamical parameters. In other words, the initial price can produce a virtual financial butterfly effect. If a simulated asset starts a few cents higher, it might mean the difference between failure and the Fortune 500 -- or even a bear and bull market.

“It depends drastically on the price at the outset to which of the two patterns the market arrives at during the course of time,” said Anastasiia Panchuk, another author on the paper. “It implies a rather high level of instability of the financial market for the respective parameter values, the situation one would strongly like to avoid in reality.”