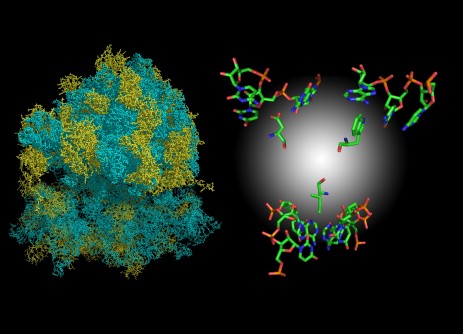 Analysis of ribosome structures (shown on the left) from four different species revealed a non-random affinity between anticodon-containing RNA triplets and their respective amino acids (shown on the right).

Newswise — With few exceptions, all known forms of life on our planet rely on the same genetic code to specify the amino acid composition of proteins. Although different hypotheses abound, just how individual amino acids were assigned to specific three-letter combinations or codons during the evolution of the genetic code is still subject to speculation.

Taking their hints from relics of this evolution left behind in modern cells, researchers at the Salk Institute for Biological Studies concluded that after only two waves of "matching" and some last minute fiddling, all 20 commonly used amino acids were firmly linked with their respective codons, setting the stage for the emergence of proteins with unique, defined sequences and properties.

Their findings, which will be published in next week's online edition of the Proceedings of the National Academy of Sciences, provide the first in vivo data shedding light on the origin and evolution of the genetic code.

"Although different algorithms, or codes, were likely tested during a long period of chemical evolution, the modern code proved so robust that, once it was established, it gave birth to the entire tree of life," says the study's lead author Lei Wang, Ph.D., an assistant professor in the Chemical Biology and Proteomics Laboratory.

"But the universality of the code makes it very hard for researchers to study its formation since there are no organisms using a primitive or intermediate genetic code that we could analyze for comparison," he explains.

Cells provide a dazzling variety of functions that cover all of our body's needs, yet they make do with a very limited number of molecular building blocks. With few exceptions, all known forms of life use the same common 20 amino acids-and only those 20-to keep alive organisms as diverse as humans, earthworms, tiny daisies, and giant sequoias.

Each of the 20 amino acids is matched to its own carrier molecule known as transfer RNA (tRNA). During protein synthesis, which is coordinated by so-called ribosomes, amino acids are brought out one by one by their respective tRNAs and inserted in the growing protein chain according to the instructions spelled out in the universal language of life-the genetic code. The code is "read" with the help of anticodons embedded in each tRNA, which pair up with their codon-counterparts.

Several hypotheses have been put forward to explain why codons are selectively assigned to specific amino acids. "One of the theories, the stereochemical hypothesis, gained some traction when researchers could show that short codon- or anticodon-containing polynucleotide molecules like to interact with their respective amino acids," says graduate student and first author David B. F. Johnson.

If chemical or physical interactions between amino acids and nucleotide indeed drove the formation of the genetic code, Johnson reasoned, then he should be able to find relics of this mutual affinity in modern cells. He zoomed in on ribosomes, large complexes consisting of some 50 proteins interacting closely with ribosomal RNAs.

"Also, the ribosome emerged from an early evolutionary stage of life to help with the translation of the genetic code before the last universal common ancestor," explains Wang, "and therefore is more likely to serve as a molecular fossil that preserved biological evidence."

When Wang and Johnson probed bacterial ribosomes for imprints of the genetic code, they found evidence that direct interactions between amino acids and nucleotide triplet anticodons helped establish matching pairs. "We now believe that the genetic code was established in two different stages," says Johnson.

Their data does not shed much light on the early code, consisting of prebiotically available amino acids-the kind generated in Stanley Miller's famous "zap"-experiment. But once some primitive translational mechanism had been established, new amino acids were added to the mix and started infiltrating the genetic code based on specific amino acid/anticodon interactions.

"We found evidence that a few amino acids were reassigned to a different codon but once the code was in place it took over," says Johnson. "It might not have been the best possible solution but the only one that was viable at the time."

The work was supported in part by the Searle Scholar Program, the Beckman Young Investigator Program and the National Institutes of Health Director's New Innovator Award.