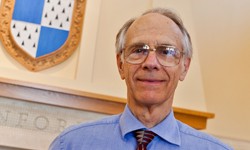 SIOUX FALLS, S.D. – The results of The Sanford Project’s first clinical trial are published in the July edition of The Lancet Diabetes & Endocrinology, revealing the outcome of a two-year study exploring the benefits of two drugs in treating type 1 diabetes.

The study is titled “Combination therapy with sitagliptin and lansoprazole in patients with recent-onset type 1 diabetes (REPAIR-T1D): 12-month results of a multicentre, randomised, placebo-controlled, phase 2 trial.”

The Sanford Project is an emerging translational research center focused on targeted diabetes research, cures and care made possible in part through the generosity of Denny Sanford and Todd and Linda Broin.

In August 2012, The Sanford Project Todd and Linda Broin Chair Alex Rabinovitch, M.D., and his team announced they had reached full patient enrollment for Restore Pancreatic Insulin Response in type 1 diabetes (REPAIR-T1D). Based on a successful mouse model, the study explored if two FDA-approved drugs, sitagliptin and lansoprazole, could regenerate beta cells in humans by improving levels of GLP-1 and gastrin hormones. Type 1 diabetics experience a loss of insulin-producing beta cells and need to inject insulin into their bodies manually.

Sixty-nine participants between the ages of 11 and 36 received either the two drugs or a placebo while continuing their insulin injections. The group receiving the drugs did not experience an improvement in insulin production, but some study participants whose GLP-1 and gastrin levels increased may have better preserved beta cell levels.

“While the results of our first clinical trial did not indicate a regeneration of beta cells as a result of the drugs used, it is promising that some of the participants seemed to have preserved beta cells that may have otherwise died,” said Rabinovitch. “The next step is to design another study based on what we learned from the REPAIR trial and continue to make progress towards a cure.”

Rabinovitch is finalizing plans for the next clinical trial involving participants from the REPAIR-TID project to better understand why responses to the sitagliptin and lansoprazole differed among participants.

“What is perhaps most remarkable about the completion of this trial is the pace in which we are able to conduct research here at Sanford because of our size and strategic investments in people and infrastructure,” said David Pearce, Ph.D., vice president and chief operating officer for Sanford Research. “The results have left The Sanford Project team both anxious and prepared to learn more about why patients reacted differently to the two drugs that were utilized in this clinical trial.”

The REPAIR-T1D trial was funded by Sanford Research and JDRF.

“Curing T1D is challenging because of the complexity of the disease and the differences among the people who are diagnosed with it” said JDRF director and program lead Patricia Kilian, Ph.D. “The REPAIR-T1D study was an important translational effort; testing what was a promising approach in animals in a well-executed study with people. The results represent another step on the path towards improving beta cell function for people with T1D and our ultimate goal of finding a cure for the disease.”

JDRF has a strategic T1D research plan with a strong emphasis on translational development designed to deliver a sustained stream of new, life-changing therapies to people with this disease. This study was supported in part by JDRF as part of its restoration research program, the goal of which is to restore the body’s beta cell function and halt the autoimmune attack – in short, the biological cure for type 1 diabetes.

About Sanford Research Sanford Research is a non-profit research organization and is part of Sanford Health, an integrated health system headquartered in the Dakotas. Sanford represents the largest, rural, not-for-profit health care system in the nation with a presence in 111 communities, nine states and two countries. In 2007, a transformational gift of $400 million by Denny Sanford provided for an expansion of children’s and research initiatives, one of which was to find a cure for type 1 diabetes, and has given Sanford Research significant momentum in its goal of becoming one of the premiere research institutions in the United States and the world. Most recently, subsequent gifts of more than $200 million by Mr. Sanford have paved the way to establish Edith Sanford Breast Cancer Research and Sanford Imagenetics.