The Subtle Science of Wok Tossing

Researchers at Georgia Tech uncover the factors that go into making superior fried rice, setting the stage for a rice-tossing robot. 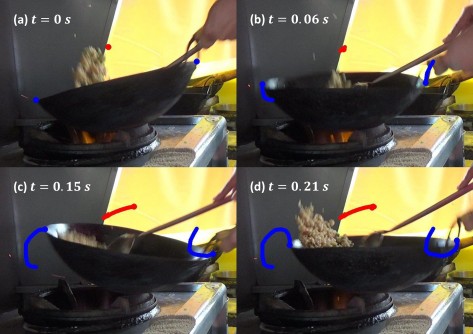 Illustration of the movements of the wok and rice during four phases of a 0.322-second cycle: (a) The chef tilts the front end of the wok up while moving it backward to catch the falling rice. (b) The wok is at its farthest point from the chef (with zero translational velocity); most of the rice has landed. (c) The wok is pulled toward the chef as the front end is tilted down. (d) The back end of the wok is abruptly lowered leaving most of the rice airborne.

Fried rice being cooked in a wok during a five-second interval, recorded in real time. The blue loops show the trajectory of the front and back of the wok during each cycle; the red line shows the path of the wok’s center of mass.

Illustration of the oscillatory movements of a wok while fried rice is being cooked.

Newswise — WASHINGTON, D.C., November 19, 2018 -- Wok tossing is essential for making a good fried rice -- or so claim a group of researchers presenting new work at the American Physical Society’s Division of Fluid Dynamics 71st Annual Meeting, which will take place Nov. 18-20 at the Georgia World Congress Center in Atlanta, Georgia.

The researchers, led by David Hu, a fluid mechanics professor at the Georgia Institute of Technology, and his doctoral student Hungtang Ko, became interested in the physics of cooking and noticed that relatively little attention had been paid to Chinese cuisine. Seeking to satiate their curiosity, they focused on stir-fry, which lies at the heart of the Chinese culinary style, dating back at least to the Sui Dynasty, around A.D. 600. The team set out to isolate the key elements of this venerable cooking technique.

As a first step, Ko videotaped experienced chefs as they made fried rice at two stir-fry restaurants in Taiwan. Restaurant customers assumed that Ko was making a TV show, never suspecting that he was engaged in a serious scientific investigation. After Ko returned to Georgia Tech, he and Hu carefully tracked the movements of the wok during the roughly two-minute cooking process, identifying continuously repeating cycles lasting about a third of a second each. They broke down each of these 0.32-second cycles into four distinct phases composed of two oscillating motions: a translational motion, in which the wok moves toward and away from the chef, and a rotational or “seesaw” motion, in which the wok is tilted backward and forward. These two periodic motions share the same frequency but are slightly out of phase.

The net effect, said Hu, is like “flipping pancakes or juggling with rice. The key thing is that the rice must leave the wok to cool, because the wok is very hot” -- up to 1,200 degrees Celsius. So, the chef is constantly flinging the rice into the air, catching it, mixing it, and then flinging the ingredients again, until the concoction is cooked and perfectly browned but not burned.

“Once we came up with a mathematical model for fried rice cooking,” Ko said, “we realized it could lend itself rather easily to a robotic design.” Previous attempts at stir-fry robots succeeded in mixing the ingredients by shaking or rotation, added Hu, “but none were able to throw the rice, which meant they couldn’t cook at the high temperatures needed to produce nicely carbonized grains.”

Fried rice cooking is an extremely fast-paced and strenuous activity, with top chefs working at the limits of human capabilities. “If there was an automated way of doing this,” Hu noted, “it could be very useful.”

At the Annual Meeting, The Gallery of Fluid Motion will consist of posters and videos submitted by attendees illustrating the science and beauty of fluid motion. More information can be found here: https://gfm.aps.org/.

We will grant free registration to credentialed journalists and professional freelance journalists. If you are a reporter and would like to attend, contact Rhys Leahy or the AIP Media Line (media@aip.org, 301-209-3090). We can also help with setting up interviews and obtaining images, sound clips or background information.

A press briefing featuring a selection of newsworthy research will be webcast live from the conference Monday, Nov. 19. Times and topics to be announced. Members of the media should register in advance at http://apswebcasting.com/webcast/registration/aps1118.php.

The Division of Fluid Dynamics of the American Physical Society, established in 1947, exists for the advancement and diffusion of knowledge of the physics of fluids with special emphasis on the dynamical theories of the liquid, plastic and gaseous states of matter under all conditions of temperature and pressure. For more information about DFD, visit https://www.aps.org/units/dfd/.

The American Physical Society (APS) is a nonprofit membership organization working to advance and diffuse the knowledge of physics through its outstanding research journals, scientific meetings, and education, outreach, advocacy, and international activities. APS represents over 55,000 members, including physicists in academia, national laboratories, and industry in the United States and throughout the world. For more information about APS, visit https://www.aps.org/.

Caption: Fried rice being cooked in a wok during a five-second interval, recorded in real time. The blue loops show the trajectory of the front and back of the wok during each cycle; the red line shows the path of the wok’s center of mass.

Caption: Illustration of the oscillatory movements of a wok while fried rice is being cooked.

The physics of tossing fried rice