The surprising attractiveness of a hurdle to developing safe, clean and carbon-free energy 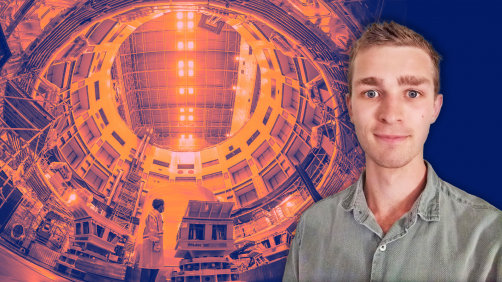 Newswise — Scientists have discovered the remarkable impact of reversing a standard method for combatting a key obstacle to producing fusion energy on Earth. Theorists at the U.S. Department of Energy’s (DOE) Princeton Plasma Physics Laboratory (PPPL) have proposed doing precisely the opposite of the prescribed procedure to sharply improve future results.

The problem, called “locked tearing modes,” occurs in all today’s tokamaks, doughnut-shaped magnetic facilities designed to create and control the virtually unlimited fusion power that drives the sun and stars. The instability-caused modes rotate with the hot, charged plasma — the fourth state of matter composed of free electrons and atomic nuclei that fuels fusion reactions — and tear holes called islands in the magnetic field that confines the gas, allowing the leakage of key heat.

These islands grow larger when the modes stop rotating and lock into place, a growth rate that increases the heat loss, reduces the plasma performance and can cause disruptions that allow the energy stored in the plasma to strike and damage the tokamak’s inner walls. To avoid such risks, researchers now beam microwaves into the plasma to stabilize the modes before they can lock.

However, the PPPL findings strongly suggest that researchers stabilize the modes in large, next-generation tokamaks after they have locked. In today’s tokamaks, “these modes lock more quickly than people had thought and it becomes much harder to stabilize them while they’re still rotating,” said Richard Nies, a doctoral student in the Princeton Program in Plasma Physics and lead author of a Nuclear Fusion paper that lays out the surprising findings.

Another drawback, he added, is that “these microwaves increase their width by refracting off the plasma, making the stabilization of the mode while it’s rotating even less efficient today, and this problem has become more exacerbated in recent years.”

Accompanying these issues is the fact that in large future tokamaks like ITER, the international facility under construction in the south of France, “the plasma is so huge that the rotation is much slower and these modes lock pretty quickly when they’re still pretty small,” Nies said. “So it will be much more efficient to switch up the stabilization package in big future tokamaks and let them first lock and then stabilize them.”

That reversal could facilitate the fusion process, which scientists around the world are seeking to reproduce. The process combines light elements in the form of plasma to release vast amounts of energy. “This provides a different way of looking at things and could be a much more effective way to deal with the problem,” said Allan Reiman, a distinguished research fellow and co-author of the paper. “People should take more seriously the possibility of allowing the islands to lock,” Reiman said.

The recommended technique is unlikely to work in today’s tokamaks because tearing mode islands grow so fast and are so large when they lock in these facilities that the plasma is close to disrupting once it has locked. That’s why researchers must now use large amounts of power to stabilize the modes at the cost of limiting fusion output. By contrast, the slow growth of islands in next-generation tokamaks “leaves a long way to go before you have a disruption so there’s a lot of time to stabilize the mode,” Nies said.

Once the modes in future tokamaks are locked in place microwaves can target them directly instead of stabilizing them only when they rotate past the microwave beam in current facilities. “These theoretical calculations show the efficiency of what we are proposing,” Nies pointed out.

What now is needed are experiments to test the proposed course of action, he said. “We would not want to turn on ITER and only then find out which strategy works. There is real opportunity to explore the physics that we address in current devices.”

Simulation results presented in this study are from the PPPL computer research cluster. Co-authors included physics Professor Nat Fisch, director of the Princeton Program in Plasma Physics and associate director for academic affairs at PPPL. Support for this work comes from the DOE Office of Science.

PPPL, on Princeton University's Forrestal Campus in Plainsboro, N.J., is devoted to creating new knowledge about the physics of plasmas — ultra-hot, charged gases — and to developing practical solutions for the creation of fusion energy. The Laboratory is managed by the University for the U.S. Department of Energy’s Office of Science, which is the single largest supporter of basic research in the physical sciences in the United States and is working to address some of the most pressing challenges of our time. For more information, visit https://energy.gov/science.