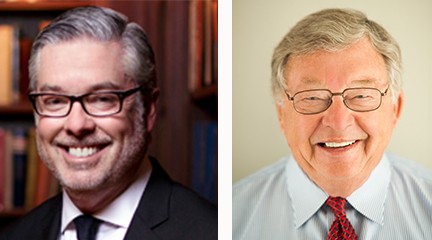 Newswise — PHILADELPHIA—(July 13, 2017)—The Wistar Institute, an international leader in biomedical research in the fields of cancer, immunology and infectious diseases, recently appointed John Fry and Morton Collins, Ph.D., to its Board of Trustees.

Fry is the 14th President at Drexel University and has spent his career serving higher-education leadership roles as president, chief executive, chief operating officer, board member, and consultant. Preceding his 2010 appointment as Drexel’s President, Fry was President of Franklin & Marshall College from 2002 to 2010 and Executive Vice President at the University of Pennsylvania from 1995 to 2002. Fry will serve on Wistar’s Board of Trustees as one of two representatives of the Academy of Natural Sciences of Drexel University, a requirement of Wistar’s governing documents since it was founded in 1892.

In addition to leading Drexel, Fry became the chairman of the Chamber of Commerce for Greater Philadelphia in October 2016. A native of Brooklyn, N.Y., he graduated from Lafayette College and earned a master’s degree in business administration from the New York University Stern School of Business.

“John has played a pivotal role transforming the standards for education and collaboration at Drexel, Franklin & Marshall and Penn by creating and investing in these institutions so they become catalysts for the development of their communities and beyond,” said Dario C. Altieri, M.D., President and CEO, Cancer Center Director and the Robert and Penny Fox Distinguished Professor, at The Wistar Institute. “His strategic guidance will bolster Wistar partnerships and positively impact public-private alliances, surrounding neighborhoods and overall economic development in the Greater Philadelphia region.”

Collins is the Founder and Managing Partner of M. Collins Ventures, LLC, a venture capital fund focused on therapeutic immunology, ultrafast lasers and quantum computing. Collins is a distinguished life sciences industry leader and venture capitalist with experience merging the business of science, technology and finance. In 2002 prior to founding M. Collins Ventures, LLC, he was Founder and Managing Partner of Battelle Venture Partners, an early-stage venture capital fund focused on intellectual property from Battelle Laboratories and six national Department of Energy laboratories managed by Battelle. In 1968, Collins founded and served as CEO of Data Science Ventures (DSV), a pioneering, highly successful venture capital firm that he managed for more than three decades. DSV specialized in early-stage financing of high-technology companies in the fields of life sciences, electronic materials, communications, and software.

Currently, he serves as Chairman of the Boards of Directors of portfolio companies 360ip Inc. and FemtoBlanc Inc. In addition, Collins sits on the boards of publicly traded Kopin Corp. and Inovio Pharmaceuticals, Inc. and privately held Pharos LLC, Formula Pharmaceuticals, DoughMain, AENEOS Therapeutics, Cerminaro Group LLC, and Ascendance Biotechnology (formerly Hepregen). Collins received a bachelor’s degree in chemical engineering from the University of Delaware and a master’s degree and Ph.D. in chemical engineering from Princeton University. He earned an honorary Ph.D. in science from the University of Delaware.

“Mort contributes a wealth of specialized knowledge of the biomedical and tech industries as well as decades of venture capital expertise,” said Altieri. “As part of the health and science innovation corridor here in West

Philadelphia, Wistar is focused on accelerating our biomedical discoveries into drugs or therapies to prevent and treat disease. Mort’s extensive experience will strengthen the Institute in its mission to quickly and safely move our scientific contributions from bench to bedside.”

The Wistar Institute is an international leader in biomedical research with special expertise in cancer research and vaccine development. Founded in 1892 as the first independent nonprofit biomedical research institute in the country, Wistar has held the prestigious Cancer Center designation from the National Cancer Institute since 1972. The Institute works actively to ensure that research advances move from the laboratory to the clinic as quickly as possible. wistar.org.