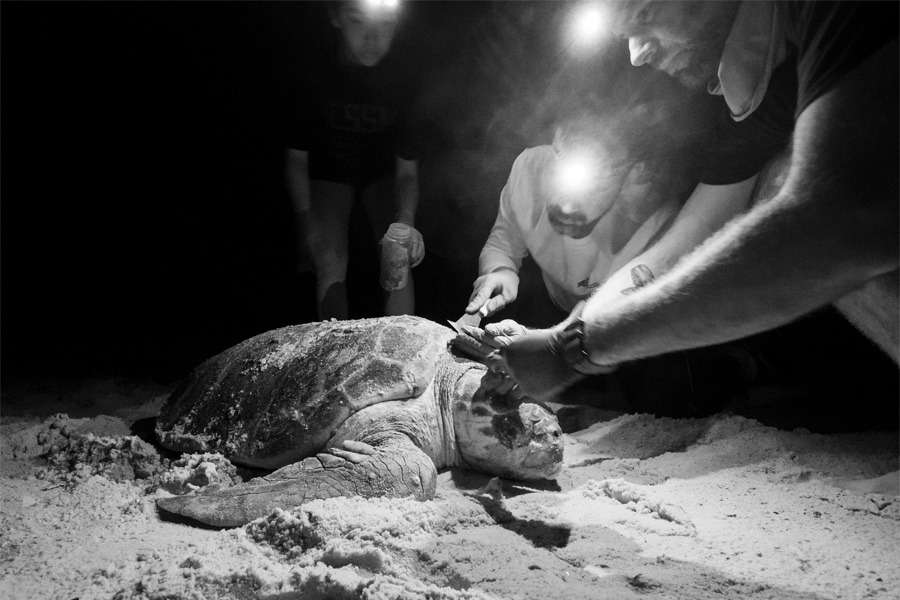 Researchers collect samples of organisms living on the shells of loggerhead sea turtles during summer 2018.

Editor’s note: The photographs of loggerhead sea turtles were taken during research activities permitted by the Florida Fish and Wildlife Conservation Commission (permit #MTP-18-239) under conditions not detrimental to these animals. Please do not attempt to recreate the content of these images without appropriate training and observation. These images were taken under red light and converted to black-and-white in post-processing.

There is a world of life on the backs of loggerhead sea turtles, and it’s more abundant and diverse than scientists knew.

An international team led by Florida State University researchers found that more than double the number of organisms than previously observed live on the shells of these oceanic reptiles, raising important questions about loggerhead sea turtle ecology and conservation.

The study was published in the journal Diversity.

“This suggests loggerhead turtles are hotspots for organism abundance and biodiversity,” said Jeroen Ingels, a researcher with the Florida State University Coastal and Marine Laboratory and lead author of the study. “We suspect that larger organisms that are able to form structures serve as habitats for microscopic creatures and allow for greater levels of abundance and biodiversity.”

Researchers discovered this organism diversity by sampling meiofauna, which are organisms roughly between 1 millimeter and about 0.032 millimeters in size.

The researchers specifically focused on a type of aquatic meiofauna called nematodes, also known as roundworms. Previous research had not considered these tiny creatures when surveying the communities of organisms that live on the backs of loggerhead sea turtles.

“To find nematodes on loggerhead turtle carapaces is no surprise, but when we compared their numbers and diversity to those from other hard surfaces or even on marine plant life, we realized their carapaces abound with this microscopic life, the extent to which had hardly been documented in the past,” Ingels said.

The FSU researchers, together with a team from Brazil led by Professor Giovani dos Santos and Professor Yirina Valdes, sampled the shells from 24 loggerhead turtles that migrated to Florida’s St. George Island in the summer of 2018 to lay eggs.

The researchers examined a forward, middle and posterior section of each shell to see if the different areas had different microscopic communities. To collect their samples, they removed barnacles, then scraped the shells and sponged them down to carefully gather every living creature.

They found thousands of meiofauna organisms. One turtle had more than 146,000 individual organisms living on its carapace. Researchers also found that the posterior section of the shells, closest to the rear flippers, had different communities and a higher diversity of species.

Previous studies of loggerheads had found fewer than 100 different species of any kind living on their shells. By including the nematodes found in this new study, the researchers added at least 111 new species to the list of organisms that can live on the backs of loggerheads. That count doesn’t include other types of meiofauna, meaning the number could be even greater.

The research may help explain a paradox around these miniature creatures: How can the same types of aquatic meiofauna be found in different parts of the world, hundreds or even thousands of miles away? Researchers think they are able to travel large distances on the backs of sea turtles, which could help explain their widespread distribution.

“Were these turtles colonized by microorganisms in different places?” asked Ingels. “It’s exciting because it means we may be able to infer where loggerheads have been based on the microscopic communities on their shells.”

Tens of thousands of microscopic organisms can colonize loggerhead turtles, which visit remote coasts and beaches during their migration. It makes sense that there would be a connection between the locations frequented by the turtles and the places where the same meiofauna are found, Ingels said. A better understanding of that link could help inform conservation practices for these reptiles.

“Information on key areas used by loggerhead turtles is crucial to inform their management, as it helps identify key threats that they are exposed to,” said Mariana Fuentes, a co-author of the article and assistant professor of oceanography in the FSU Department of Earth, Ocean and Atmospheric Science.

This research was funded by the Florida Sea Turtle License Plate Grant and the PADI Foundation.