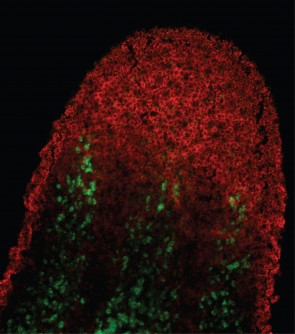 An abundant stem cell population (green) helps maintain the ciliated epithelium (red) and other tissues of an adult planarian flatworm.

Newswise — KANSAS CITY, MO—With its abundance of stem cells known as neoblasts, and remarkable abilities to restore body parts lost to injury, the humble flatworm, or planaria, has become an exciting model organism to study the processes of tissue and organ regeneration.

Stowers researcher Elizabeth Duncan, Ph.D., and her collaborators provide one of the first in-depth in vivo investigations of chromatin regulation in planaria in a study published in the Dec. 17 online issue of Cell Reports. The research builds on Duncan’s investigations involving chromatin—a cluster of DNA, histones and non-histone proteins found within the nucleus of a cell. Chromatin packages DNA and acts as a gatekeeper of genetic information. During chromatin regulation, enzymes add chemical tags to the cell’s histone proteins, a process that predisposes regions of the genome to particular functions.

Duncan identified the key regions of the genome targeted by two such enzymes, Set1 and MLL1/2, by knocking down the levels of these enzymes in planarians. She found that the Set1 targets were largely associated with the maintenance of the planarian stem cell population and that worms without this enzyme eventually died. However, knocking down MLL1/2 produced strikingly different results; rather than losing stem cells, these planaria lost the cilia on their skin and stopped swimming.

Next, Duncan isolated planarian cells and analyzed histone protein interactions with DNA over the entire genome using chromatin immunoprecipitation followed by DNA sequencing (ChIP-seq). The paper is the first published report of the use of this technique in planaria. Using ChIP-seq, she marked the genes the enzymes targeted, revealing that changes in cilia-associated genes occurred in the neoblasts.

Cilia in planaria are similar to the cilia lining human lungs, which help expel mucous. Duncan’s discovery suggests that defects in ciliogenesis, the process of building cilia, may begin earlier than thought, a finding that has potential implications for a broad range of human health conditions, including primary ciliary dyskinesia, hydrocephalus, polycystic liver and kidney disease and heart defects.

“Now we think that the stem cells may be preparing themselves to express cilia-coding genes later, and so this enzyme is needed to establish that potential,” she says.

“It is important to know that MLL1/2 has the ability to set up later events, because that opens up a whole new way of thinking. For example, cilia genes have been implicated in heart defects, but it is not necessarily because cardiac cells have cilia; it’s because the change happened at some earlier stage in development,” Duncan says. “It seems like an important piece of the puzzle to understand that this enzyme can affect the whole group of genes that are involved in cilia. It is not just a single gene; it’s a whole collection of them.”

Conducting the study in vivo provided a “nice, clean connection to the biology associated with these enzymes,” compared to studying them in a petri dish, Duncan adds.

In an eLife paper published online Oct. 12, first author Kimberly Tu, Ph.D., also in the Sánchez Alvarado Lab, and colleagues investigate how neoblasts develop into epidermal cells, which make up the worm’s skin. The process involves a series of steps in which different genes are expressed at each stage. The researchers found that a gene called egr-5, which encodes a transcription factor, controls the expression of these marker genes, and is highly expressed when cells begin to differentiate into epidermal cells. When the activity of egr-5 was reduced, it blocked the cells from differentiating properly, and they were unable to make mature skin cells.

“This generates a breach in the integrity of the epidermis,” Tu says. “Eventually the animals will die because they fail to make new epidermal cells.”

The breach also signals a stress response in the planaria, causing the neoblasts to over proliferate and differentiate into other cells including neurons and gut cells. The findings uncover a critical role for egr-5 in the development of epithelial cells, and shed light on the biological complexity at work in this seemingly simple organism.

Planaria are tiny (about the size of a toenail clipping), aquatic flatworms, most often found in standing water. Though humble in size and appearance, they are one of nature’s wonders. Planaria have the ability to regenerate from a small scrap of tissue, and have an abundance of adult stem cells, called neoblasts, that can specialize, or differentiate, into other cell types. Two new studies from the Stowers Institute shed light on some of the intricate processes at work when planarian neoblasts differentiate into skin cells.

In a study published in the Dec. 17 online issue of Cell Reports, Elizabeth Duncan, Ph.D., identifies how the enzyme MLL1/2 affects the development of planarian cilia, the microscopic, hair-like-structures on the organism’s skin that help it swim. Without the enzyme, planaria lose their cilia and stop swimming. Duncan’s discovery suggests that defects in the process of building cilia may begin earlier than thought, a finding that has potential implications for the detection of a broad range of human health conditions.

Kimberly Tu, Ph.D., and colleagues found that a gene called egr-5 is important and plays a key role in helping neoblasts differentiate into skin cells. When the activity of egr-5 was reduced, it blocked neoblast daughter cells from differentiating properly, and they did not make mature skin cells. The findings uncover the critical role of egr-5 in the development of skin cells, and illustrate the complexity of this seemingly simple organism.About the Stowers Institute for Medical Research