University's Department of Theatre and Dance opens 2018 – 2019 season Nov. 16 with “Mother Courage and Her Children”

Newswise — Exactly 80 years after Thornton Wilder premiered his stage classic “Our Town,” the UC San Diego Department of Theatre and Dance is set to give it a modern makeover, complete with a diverse cast pulled from a dynamic undergraduate student body.

The Pulitzer Prize-winning drama is one of three productions for fall quarter from the famed department, ranked fourth in the world for its MFA acting program and named a top five undergraduate drama program to launch an acting career.

“I chose this play in particular, thinking that it would be a thrilling play for undergraduates to explore,” said Kim Walsh, “Our Town” director, acting faculty member and MFA alum. “This play in particular is about the human experience, from basic daily life to what it is to love and, finally, what it is to deal with being mortal. It’s such an incredible opportunity to explore these themes as young adults.”

Walsh said they are placing the classic play in modern dress, not in the early 1900s as it was originally written: “I didn’t want audiences to distance themselves from the piece because of the period and feel they will better identify with the universality of the play if set in the present.” In preparation she asked what we as a society look like, today.

“We are multicultural, and who we love does not have to be a different gender. The tapestry of the people in our community — in particular, the community of these students — is multiracial and diverse. I wanted the play to reflect what we look like now,” she said.

Directing UC San Diego undergraduate students is a privilege, Walsh said, because they come from so many different walks of life and have, rightfully so, worked hard to get into the university. This production is an opportunity for students to define and develop their passions, she said.

“These students have so much to offer in their experiences,” she said. “Our Town” opens Nov. 27 and runs through Dec. 1.

Department of Theatre and Dance professor Vanessa Stalling directs the mouthful “A Beautiful Day in November on the Banks of the Greatest of the Great Lakes,” a timely look at competition and gender roles written by Kate Benson. Stalling said it has been a positive experience seeing both undergraduate and graduate students work on the stage together.

“The playwright speaks to her desire to leave room for the actors’ voice in a rehearsal process in her introductory remarks. By leaving out stage directions, she directly carves more space for the actors and designers to generate proposals about how to handle staging,” Stalling said. “It asks for great collaboration and respect between all.”

Opening in previews Nov. 28 and running through Dec. 8, “A Beautiful Day in November” is particularly challenging, Stalling said, given the unconventional format. A mashup of the sports and domestic worlds, the play sees two announcers narrating a “play by play” of a family preparing a Thanksgiving meal. It’s a “collision of domesticity and sports,” Stalling said, where the desire to come together has the potential to be more powerful than what divides us. Less about what is said by the playwright and more about what is physically done by the cast and designers, the play is centered on the role of women in families and matriarchy.

“There are many plays that deal with divisions amongst family members, but with this particular play, I hope audiences will appreciate a new style of storytelling. The form of the play is quite unique in that is asks for the divisions and stresses of family life to be expressed by the actor with heightened physicality and movement,” Stalling said.

For MFA directing student Dylan Key, overseeing a complete production requires a partnership between all involved, including the design team. Key directs “Mother Courage and Her Children,” opening in previews Nov. 14 and running through Nov. 24.

“I’ve been really fortunate to have for incredible designers on this show,” Key said, acknowledging fellow graduate students Yi-Chien Lee in scenic design, Minjoo Kim in lighting design, Dorottya Vincze in costume design and Zhongran Wang in sound design. “Myself and all the designers have radically different perspectives, so finding our own resonances in the text has been both important and exciting.”

“Mother Courage and Her Children” by Bertolt Brecht is considered one of the defining plays of the 20th century and tells the story of an enterprising woman in wartime — played by MFA student Janet Fiki — who runs a wagon, selling goods to warring soldiers in order to make a living for herself and her children.

Recognizing that artmaking is a shared experience, Key said the actors “fill in and deepen and expand” the production in wonderful ways. “We have a shared history of collaboration, and the level of intimacy and depth of that collaboration has only deepened over our three years together,” he said.

Individual tickets and more information can be found at the Department of Theatre and Dance’s complete 2018 – 2019 season webpage, with special $5 discount tickets available to those affiliated with UC San Diego. The three fall-quarter productions are included in the department’s season subscription: six plays for $50. All productions, except where noted, are performed in the Joan and Irwin Jacobs Theatre District at UC San Diego.

“MIKO, a space between” is an immersive graduate dance performance directed by MFA candidate Aurora Lagattuta. Site specific, the performance will be held at the UC San Diego Scripps Institution of Oceanography.
graduate dance production
Show dates: Jan. 23, 24 and 25 @ 5 p.m.

The Wagner New Play Festival is the department’s one-of-a-kind opportunity to see the most exciting new plays being written by UC San Diego playwrights, additionally showcasing the exceptional talents of the MFA actors, directors, designers and stage managers as they come together to bring multiple plays to the stage.
graduate theater productions
Show dates: May 7 – 18

“Sonnets for an Old Century” by Jose Rivera is an anthology-style play that weaves together a series of 28 different sonnets delivered by a diverse cast of characters who are inspired by real-life actors the playwright knew.
undergraduate theater production
Show dates: June 5, 6, 7 and 8 @ 7:30 p.m.; June 8 @ 2 p.m.

New Directions 2019 showcases the work of undergraduate choreographers who are testing the boundaries of movement and embodiment with inventive new work.
undergraduate dance production
Show dates: June 6, 7 and 8 @ 7:30 p.m. 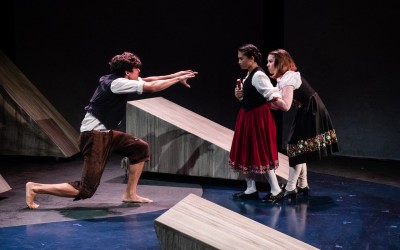 Caption: The final undergraduate theater production of the prior season was “Peer Gynt,” featured here. For 2018 – 2019, the undergraduate actors open with “Our Town” Nov. 27. 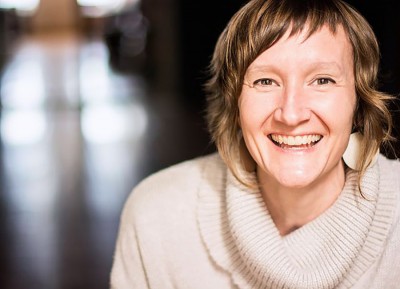 Caption: Vanessa Stalling, pictured here, directs “A Beautiful Day in November on the Banks of the Greatest of the Great Lakes,” opening Nov. 30. 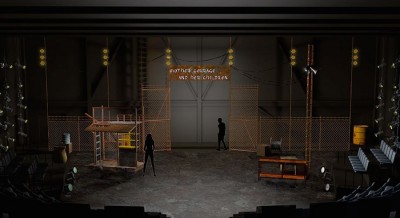 Caption: A rendering of the scenic design for “Mother Courage and Her Children” by MFA student Yi-Chien Lee; the production opens Nov. 16.