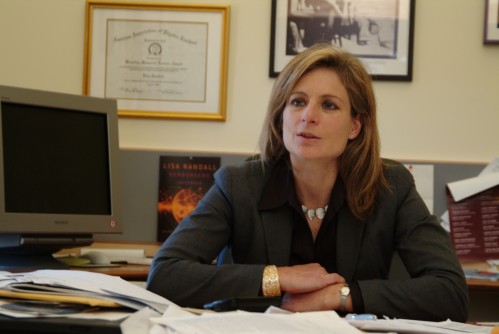 Newswise — The American Institute of Physics (AIP) has chosen renowned physicist and writer Lisa Randall, Ph.D., as the 2012 recipient of the Andrew Gemant Award, which is given annually for significant contributions to the cultural, artistic, or humanistic dimension of physics.

“I was delighted to hear about this award,” said Randall. “It’s very nice for such broader creative activities stemming from physics to be recognized. They can be both risky and rewarding, so it’s very satisfying when they work out well.”

Randall is considered one of the most influential theoretical physicists of the past decade. Her scientific research explores gaps in our current understanding of the properties and interaction of matter, such as why gravity is weaker than other fundamental forces and what is the nature of dark matter.

Randall has used art to communicate some of the exotic ideas that stem from her research efforts. At the invitation of composer Hector Parra, she wrote the libretto for the opera “Hypermusic Prologue: A Projective Opera in Seven Planes.” The opera, which features contrasting tempos and transitions into electronically altered music, delves into the concept of extra dimensions and premiered in 2009 at the Pompidou Centre in Paris. Randall also co-curated the Los Angeles Art Association exhibit Measure for Measure, which examined the important scientific concept of scale through the lens of contemporary art.

“Art and science do appeal to some of the same creative instincts,” Randall said in a 2011 interview with Smithsonian magazine. “There’s an appreciation of something larger than ourselves, which I think both art and science address.”

“The Gemant Award was envisioned to recognize those who can forge connections between art and science, and who can bring the excitement of discovery to the public,” said Catherine O'Riordan, AIP Vice President of Physics Resources. “Lisa Randall, through her artistry, creativity, and scientific credentials advances these goals like few others.”

Randall has written two acclaimed popular science books: Warped Passages: Unraveling the Mysteries of the Universe’s Hidden Dimensions and Knocking on Heaven's Door: How Physics and Scientific Thinking Illuminate the Universe and the Modern World. She has made numerous radio and TV appearances, including The Daily Show with Jon Stewart, and Charlie Rose.

Randall earned her Ph.D. from Harvard University in 1987 and held professorships at MIT and Princeton University before returning to Harvard in 2001.

The annual Gemant Award is made possible by a bequest of Andrew Gemant to the AIP. It consists of $5,000 cash to the winner and a grant of $3,000 to further the public communication of physics at an academic institution the winner chooses. Gemant winners are also invited to deliver a public lecture on a topic of their choice. Randall will give her Andrew Gemant Lecture at an appropriate event in 2013.

Previous recipients of the award include scientists Freeman Dyson, Stephen Hawking, and Brian Greene, author Marcia Bartusiak, producer Paula Apsell, and many others.

About the Gemant Award The Andrew Gemant Award recognizes the accomplishments of a person who has made significant contributions to the cultural, artistic, or humanistic dimension of physics given annually. The recipient is named by the AIP Governing Board during its annual spring meeting. Selection is based on the recommendation of an outside Selection Committee appointed by the Institute’s Board Chairman. For more information, see: http://www.aip.org/aip/awards/gemawd.html.

About American Institute of PhysicsThe American Institute of Physics (AIP) is an organization of 10 physical science societies, representing more than 135,000 scientists, engineers, and educators. As one of the world's largest publishers of scientific information in physics, AIP employs innovative publishing technologies and offers publishing services for its Member Societies. AIP's suite of publications includes 15 journals, three of which are published in partnership with other organizations; magazines, including its flagship publication Physics Today; and the AIP Conference Proceedings series. Through its Physics Resources Center, AIP also delivers valuable services and expertise in education and student programs, science communications, government relations, career services for science and engineering professionals, statistical research, industrial outreach, and the history of physics and other sciences.