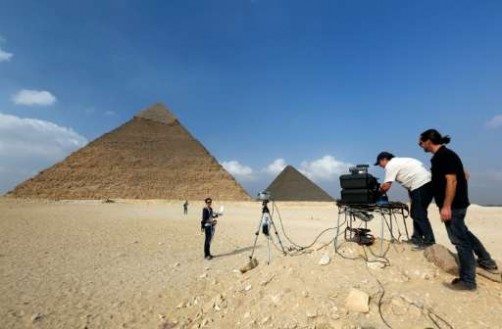 A photo released by researchers on November 10, 2015 shows engineers from the "ScanPyramids" project using infrared thermography to map the temperature of the walls of the pyramids in Giza on the outskirts of Cairo

Egypt's Ministry of Antiquities released a statement on Sunday in which the team "concluded the existence of several thermal anomalies," which could be explained by "presence of voids behind the surface, internal air currents, different materials."

The team observed a particularly impressive anomaly on the eastern side of the Khufu Pyramid, noting that "while temperatures sometimes differ [from] 0.1 to 0.5 degrees [Celsius] between two adjacent stones," this zone has "an area of few blocks having up to 6 degrees gap with neighboring blocks!"