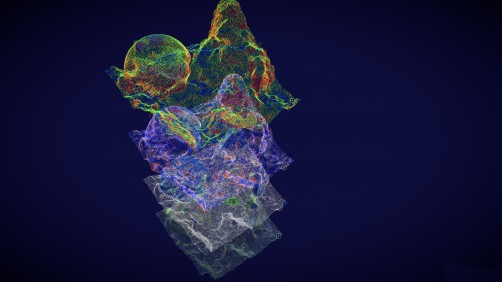 A single 3D model can store many kinds of information. In this visualization, each layer shows topographic or biological features of a 50-by-50-centimeter section of the surface of a coral reef in the U.S. Virgin Islands. The first layer visualizes the reef; the second layer depicts the location of immobile organisms that are common in coral reefs, such as hard and soft corals (including young recruits) and sponges; the third layer shows estimated roughness; and the fourth layer characterizes the slope of the reef. Such 3D models are also called point clouds, as they consist of a multitude of points that are annotated and classified with data about the study area. Martínez Quintana created numerous models like this to study the relationship between the reef environment and the distribution of coral recruits for her PhD research, which seeks to identify microhabitats suitable for recruitment of different coral species. 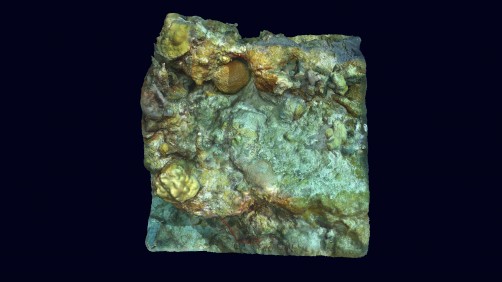 This 3D visualization brings to life one of the seascapes Martínez Quintana encountered on her dives in the U.S. Virgin Islands. Using the interactive version of the model, people can zoom in and spin the imagery around to explore the textures and colors of the reef surface. As Martínez Quintana writes in a caption explaining the model, “Among the crevices and holes in the reef it is common to find coral recruits, and in cryptic spaces, sponges are also common.” Martínez Quintana rendered the model using the Agisoft Metashape computer program and hundreds of pictures — individual frames from videos — that she took. The visualization depicts a 50-by-50-centimeter section of the reef. 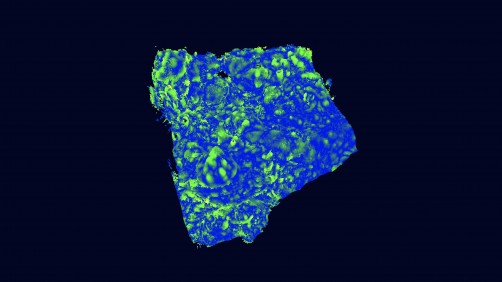 This 3D model depicts a small section of a coral reef in the U.S. Virgin Islands, focusing on the roughness or the irregularity of the reef at a millimeter scale, a characteristic of particular interest in Martínez Quintana’s research. The visualization makes it easy to understand this quality of the reef’s surface, highlighting rougher areas in gradients of green and yellow, and smoother areas in blue. The model encompasses a portion of coral reef off the coast of St. John that covers a roughly 50-by-50-centimeter area of the sea floor. This stunning 3D model depicts a young coral, called a “recruit,” that has attached to a structure called a substrate. The recruit — the small, rounded organism perched atop the substrate — glows a bright bluish green under ultraviolet (UV) light due to fluorescent proteins found in the coral’s tissue. UV light is a useful tool in coral research, making it easy to locate tiny youngsters on reefs or in the lab, Martínez Quintana says. Vibrant, interactive models like this can be used in science education, she says. “When you have something visually pretty, you can use it to talk to kids and explain to children, ‘What is a young coral?’ These models are great because you can move them around. It’s a way to capture people’s attention,” Martínez Quintana says. “Corals are animals, not plants, but they share some similarities with plants,” she says. “They are sessile, meaning that the adult organisms can’t move on their own, and just as trees in the forest release seeds to be dispersed with the wind, corals release eggs or larvae that can be dispersed with the currents. But in contrast to a seed, a larva can swim and select where to attach on the reef. Larvae of corals cannot eat. They metamorphose into a polyp with a mouth after they attach to the reef. Then, they can’t move again, so where they attach would be crucial for their survival.” Martínez Quintana’s 3D model depicts a substrate used in a coral restoration project by The Nature Conservancy in the Coral Innovation Hub on St. Croix in the U.S. Virgin Islands. She completed an internship with the organization in 2021 to guide them on the application of 3D modeling for coral restoration projects, and she will apply these techniques to create artificial substrata for the restoration of deep reefs through a postdoctoral fellowship at the University of Rhode Island.

Newswise — BUFFALO, N.Y. — Coral reefs are complex ecosystems, a jumble of microhabitats created by corals and the substrate beneath them: holes, areas that are smooth or rough, regions that have steep or shallow slopes.

Where do coral larvae, called planulae, like to settle? What seascapes help youngsters of different coral species flourish? And do varying species compete for the same microhabitats/spots on the reef?

To study these questions, University at Buffalo scientist Ángela Martínez Quintana has created stunning 3D digital models that visualize the surface of coral reefs in painstaking detail. And these artful re-creations aren’t just beautiful: They’re also filled with data on the distribution of young corals, known as recruits, that scientists are analyzing.

Martínez Quintana isn’t the first researcher to craft such models. But the science she and colleagues are doing with the models, leveraging them to study species distribution in coral reefs, could lead to exciting new tools for studying 3D ecosystems.

As climate change and other pressures kill corals, causing many reefs to lose structural complexity, the work could aid restoration efforts and illuminate how different types of coral might cope with such transformations.

The work is part of a larger National Science Foundation-funded project that explores how and why some groups of corals are holding their own on reefs while others are declining. That research is led by Howard Lasker, PhD, at UB and Peter Edmunds, PhD, at California State University, Northridge.

“When I started to do this, I did not know that reefs could be reproduced digitally, and I tried to measure holes and crevices on the reef with a caliper,” says Martínez Quintana, a UB PhD student in evolution, ecology and behavior.

She quickly realized she would need better tools. Stuart Sandin, PhD, and Nicole Pedersen, both researchers at the Scripps Institution of Oceanography, introduced Martínez Quintana to “structure from motion,” a photogrammetry technique that allows for the digital re-creation of 3D structures from sequences of overlapping images. This was the technology she needed.

Diving off the coast of St. John in the U.S. Virgin Islands, Martínez Quintana took close-up videos of coral reefs, focusing on small square areas of the sea floor called quadrats. The footage, consisting of many overlapping still frames, captured the reef’s topography in intricate detail, including objects hidden behind other objects, and regions tucked below overhangs.

“These organisms can be just a few millimeters in size, so to find them, I spent hours with my face 10 centimeters from the bottom of the reef,” she says.

The result: Beautiful, 3D models that users can rotate, zooming in and out to inspect facets of the reef. The visualizations combine Martínez Quintana’s observations of coral recruits’ location with data on the topography of the reef and other organisms present, including juvenile and adult corals, and other benthic invertebrates such as sponges.

Martínez Quintana constructed many such models, each focusing on structural details of reef surfaces in 50-by-50-centimeter areas.

Analyzing the data stored within them would require additional tools. Martínez Quintana wanted to understand the distribution of young corals in a complex, 3D ecosystem, but conventional research methods focused on the distribution of species across geographic areas in two dimensions.

She was losing too much data. She needed new techniques. For this, Martínez Quintana worked with biogeographer Adam Wilson, PhD, an associate professor of geography in the UB College of Arts and Sciences.

Wilson, a key partner on the research, developed a computational approach to analyze the models, each of which consists of a multitude of points housing information about the underwater landscape. Together, the points form a 3D polygonal mesh. Wilson’s approach allows scientists to study the distribution of coral recruits on this mesh surface, with a focus on identifying the characteristics of microhabitats suitable for recruits of different coral species.

“This method has the potential to be revolutionary, since it will allow us to better understand how organisms partition their environment and interact with each other on complex three-dimensional ecosystems. It could be used not only on coral reefs, but also on ecosystems such as the canopy of the rainforest,” Martínez Quintana says.

“What’s really innovative about Ángela’s research is that she’s using these 3D models to learn about ecological processes,” Wilson says. “She’s interested in recruitment and successful growth of young corals on the reef, so she’s been mapping where the coral recruits are on that landscape, and then using statistical models and machine learning models to try to infer which microhabitats are suitable for those corals to succeed.”

“In developing these 3D models, Ángela has opened up new ways of answering critical questions, which we have not had the tools to address,” says Lasker, UB research professor of geology and professor emeritus of environment and sustainability. Lasker is Martínez Quintana’s PhD adviser.

Martínez Quintana says 3D models hold huge promise for both research and education. A few examples of models she has constructed, including visuals and descriptions: