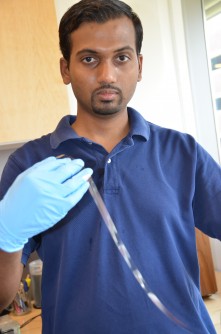 Newswise — A new use for glass is being developed by researchers in Penn State’s Materials Research Institute that could make future hybrid-electric and plug-in electric vehicles more affordable and reliable.

Thin and flexible glass for displays is already a widely commercialized technology. But even thinner glass, about one tenth the thickness of display glass, can be customized to store energy at high temperatures and for high power applications, such as electric vehicle power electronics, wind turbine generators, grid-tied photovoltaics, aerospace, and geothermal exploration and drilling.

In a recent paper in the new journal Energy Technology, postdoctoral researcher and lead author Mohan Manoharan and colleagues report on experiments with various alkali-free glass compositions and thicknesses, comparing their energy density and power density to commercial polymer capacitors currently used in electric vehicles to convert energy from the battery to the electric motor. Because polymer capacitors are designed to operate at lower temperatures, they require a separate cooling system and a larger safety factor, which adds to their bulk. In his research, Manoharan identified 10-micron thick glass from Nippon Electric Glass (NEG) as having an ideal combination of high energy density and power density, with high charge-discharge efficiency at temperatures up to 180 °C and, in more recent experiments, even higher.

Partnering with NEG leverages the investment of leading glass manufacturers in developing the processes to create continuous sheets of glass with less thickness and fewer defects. Working with State College-based Strategic Polymer Sciences, the researchers are developing the capability to produce inexpensive roll-to-roll glass capacitors with high energy density (35 J/cc3) and high reliability.

In work funded by the Department of Energy, Manoharan and the Penn State team led by Michael Lanagan, professor of engineering science and mechanics, are collaborating with Strategic Polymer Sciences to coat the glass with high temperature polymers that increase energy density by 2.25 times compared to untreated glass, and also significantly increase self-healing capabilities. Self-healing or graceful failure is an important consideration in applications where reliability is a critical factor.

“These flexible glass capacitors will reduce weight and cost if replacing polypropylene capacitors,” Manoharan said. “They could be used in any high energy density capacitor application – not only in electric vehicles, but in heart defibrillators or weapons systems such as the electric railgun the navy is developing.”

The Materials Research Institute coordinates the interdisciplinary research of over 200 faculty scientists and engineers at Penn State. For more information, visit us at www.mri.psu.edu.