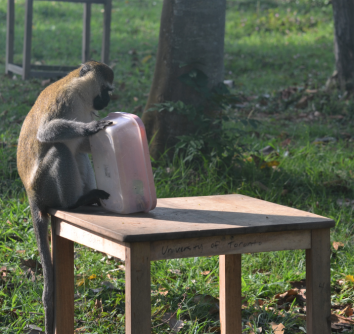 Vervet handling the box to retrieve the half banana.

Newswise — Vervet monkeys are quick and clever planners of the best route to follow on foraging trips, shows a new study. When dominant group mates are too far away to interfere, vervets tend to choose the shortest route along successive food sites, snacking on each at leisure. But when dominants group mates are nearby, they seem to assess the time before these can approach and displace them at the feeding site. They then choose the route that maximizes their food intake and minimizes travel distance before the competitors’ arrival.

These results, published in Frontiers in Ecology and Evolution, mean that vervets have excellent cognitive skills for quickly appraising the social context and planning their route accordingly. These skills allow them to choose foraging strategies that we would call rational if shown by humans.

Dr Julie A Teichroeb, associate professor at the Department of Anthropology of the University of Toronto Scarborough and the study’s corresponding author, said: “Here we show that vervet monkeys make foraging decisions that minimize travel time and distance, but also ensure they get access to their preferred food rewards when competitors are present.”

Teichroeb and colleagues study wild vervets (Chlorocebus pygerythrus) in central Uganda. In the present experimental study, done in early 2019, they presented vervets in one social group – used to the presence of researchers – with two types of food: less tasty corn (maize) kernels, and the vervets’ favorite, half a banana in a box with a hole. These foods were laid out on platforms arranged in the shape of a pentagon, where each platform was five meters away from its two nearest neighbors. Unlike corn, bananas required skill and time to retrieve: vervets had to learn through trial and error to shake, roll, or tip over the box – a process which took between one and 69 seconds, depending on the vervet’s experience and skill.

Before each of the 1028 trials, the researchers provisioned one platform chosen at random with banana, and the other four with corn. A trial started when vervets began to forage. The researchers could recognize each of the 44 vervets in the group individually from their distinctive faces, fur color, and other natural markings.

Teichroeb said: “In previous work we have shown that vervets faced with a similar foraging problem immediately rush for preferred food sites when a competitor is present, but take the route that minimizes travel distance between food sites when foraging alone. In this feeding array, that would be to start at the nearest platform, then move along the outside of the array and only take the banana when it was encountered.”

“However, the large sample size in the present study allowed us to show that vervet foraging decisions were much more complex than the above simple dichotomy.”

Rather, the vervet’s planning proved to depend on “complex, multifactor decisions that consider a great deal of contextual information,” the authors wrote. For example, vervets still took the route that minimized travel distance when no group mates were near. But if there were, they quickly assessed the risk of competition and modified their route accordingly. Key factors included the focal vervet’s individual skill in handling the banana box, its rank relative to any nearby competitors, and the latter’s distance to the feeding array.

First author Dr Jean Arseneau-Robar, a postdoctoral researcher at same institute, said: “When the competitor was at the array with them at the onset of the trial, the vervets took the hurried solution and immediately rushed to the banana, retrieving and eating it quickly. They also made a beeline for the banana when there was a high risk of competition.”

“This was the case if the dominant had short travel distance to travel time, or if the focal vervet was unskilled at retrieving the banana. But if the latter had a bit more time, he or she would stop to eat from a corn platform en route to the banana.”

Teichroeb said: “Our findings show how incredibly complex foraging decisions can be in vervet monkeys. Decision-makers are taking in a lot of ecological and social information, while also considering their own current food-handling skill, and synthesizing this all very quickly before executing their route decision. And they are very good at making the best decisions, as they manage to get their preferred food in the vast majority of cases, even when under pressure.”