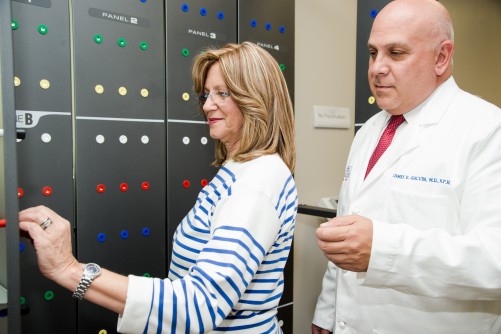 FAU neuroscientist James Galvin, M.D., uses the functional range of motion board to test a patient’s manual dexterity as part of the Dementia Prevention Initiative program he developed.

Newswise — More than 5 million Americans today are affected by Alzheimer’s disease (AD). If nothing is done to stop this upward trajectory, there will be more than 16 million people with AD in the United States and more than 60 million people with AD worldwide by 2050. In the past 25 years, only five symptomatic medications for AD have met their primary clinical endpoints in Phase III clinical trials and successfully come to market; of these, four are still available.

There is increasing evidence that multiple medical conditions increase the risk of neurodegeneration and subsequent development of dementia. It also is becoming clear that a majority of those risk factors acts in amyloid- and tau-independent ways. Since 2003, every symptom- and disease-modifying agent has failed in Phase II or III trials because of challenges with safety or efficacy, including trials testing the amyloid hypothesis, anti-inflammatory agents, and early-phase anti-tau therapies.

With disease-modifying treatment trials unsuccessful at the present time and only medications to treat symptoms available, what now?

Thinking “out-of-the-box,” a leading neuroscientist at Florida Atlantic University has developed an innovative program in the Comprehensive Center for Brain Health at FAU called the “Dementia Prevention Initiative” (DPI), which abandons generalized methods used to research and treat AD. His secret weapon: a novel “N-of-1 design” that individualizes medicine down to a single patient. Instead of conducting a conventional trial of 100 people all getting the same treatment, he has switched it around and is conducting 100 single trials personalized to the individual. His youngest patient is 61 and the oldest is 86.

“Because Alzheimer’s disease is heterogeneous in terms of risk factors, age of onset, presentation, progression, and pathology burden, designing a study to treat individuals as a homogenous population requires thousands of patients who have to be followed for years and even decades. This approach is very costly and burdensome on clinicians and patients,” said James E. Galvin, M.D., M.P.H., associate dean for clinical research in FAU’s Charles E. Schmidt College of Medicine, a world-renowned neuroscientist, a leading international expert on AD and Lewy Body Dementia (LBD), and founder of the DPI.

The DPI is a two-year clinical trial and Galvin is developing a best-practice model of personalized care that looks at each individual as the sole unit of observation. The idea is to treat neurodegenerative diseases as a disorder that develops over a lifetime and individualize ways to build a better brain as we age. The ultimate goal is to prevent dementia from happening in the first place.

Galvin’s approach follows a form of personalized treatment similarly used in cancer and delivers an individualized prevention plan, tailored to each patient’s risk profile based on their genetic traits, biomarkers (blood, imaging, and electrophysiology), socio-demographics, lifestyle choices, and co-existent medical conditions. This approach specifically targets the heterogeneity of AD by identifying person-specific risk factors and applying a customized intervention directed against this risk profile. Galvin anticipates that this method will provide more rapid information on whether personalized prevention plans can improve person-centered outcomes.

“While we know that a well-balanced, healthy lifestyle may be the cornerstone of disease prevention and brain health, each risk factor such as vascular, lifestyle choices, psychosocial behavior may both act independently and potentiate the effects of each other. Therefore, a prevention initiative needs to be multimodal and tailored to address individual risks,” said Galvin.

Although the single greatest risk factor for AD is age, AD is not inevitable. It is estimated that at age 85 there is a 42 percent risk of developing AD, which means that 58 percent of older adults do not develop dementia, even if amyloid can be detected in the brain. The reasons are unknown, but may be explained in part by a host of modifiable and non-modifiable risk factors. Up to 30 percent of AD cases may be preventable through modification of risk factors and behavioral changes to mitigate the effect of those risk factors that can’t be modified.

"We know what's good for the heart is good for the brain and we are changing people's blood profiles, controlling blood sugars, reducing inflammation, lowering blood pressure, and changing lipids and cholesterol,” said Galvin. “Our patients say that they are in better overall health, their moods have improved and they are more physically fit than before.”

Even if these precision approaches alone are not successful in preventing AD, Galvin believes that they may greatly improve the likelihood of amyloid- or tau-specific therapies reaching their endpoints by reducing comorbidities.

“Prevention of Alzheimer’s Disease: Lessons Learned and Applied,” was recently published in the Journal of the American Geriatrics Society.

FAU’s Charles E. Schmidt College of Medicine is one of approximately 147 accredited medical schools in the U.S. The college was launched in 2010, when the Florida Board of Governors made a landmark decision authorizing FAU to award the M.D. degree. After receiving approval from the Florida legislature and the governor, it became the 134th allopathic medical school in North America. With more than 70 full and part-time faculty and more than 1,300 affiliate faculty, the college matriculates 64 medical students each year and has been nationally recognized for its innovative curriculum. To further FAU’s commitment to increase much needed medical residency positions in Palm Beach County and to ensure that the region will continue to have an adequate and well-trained physician workforce, the FAU Charles E. Schmidt College of Medicine Consortium for Graduate Medical Education (GME) was formed in fall 2011 with five leading hospitals in Palm Beach County. In June 2014, FAU’s College of Medicine welcomed its inaugural class of 36 residents in its first University-sponsored residency in internal medicine. For more information, visit www.med.fau.edu.

Journal of the American Geriatrics Society