Newswise — Engineers at the University of California San Diego have developed a touchscreen app to teach students how to sketch 2D projections and 3D views freehand. This teaches students spatial visualization--the ability to think in 3D. This skill is important in many STEM fields, from Computer-Aided-Design (CAD) in engineering to using ultrasound for medical procedures.

The Spatial Vis Engineering app is now available in the Apple App Store and Google Play Store for phones and tablets, and can also run on newer Chromebooks. The app offers exercises that ask students to draw sketches of objects that are rotated in different directions. The sketches are automatically graded. If students make mistakes, they can ask for a hint and try again. The primary target audience is freshman engineering courses to help students become more proficient at CAD, but many others may benefit as well.

The United States will need an estimated one million more STEM professionals over the next decade. But the dropout rate for students in STEM majors ranges from 48 to 69 percent. Teaching sketching has been shown to increase GPAs and graduation rates in STEM among students entering college with low spatial visualization skills, especially among women and other underrepresented minorities. Sketching is also important for creativity, teamwork, and communication. Yet it’s a skill that is rarely taught. One common complaint from teachers is that it takes up precious class time. But with the app students can complete the work at their convenience on their phones.

In a pilot study of the app at the University of San Diego, one section used the app as homework and the other did not use the app. Over three times as many students in the section that used the app (62% vs 14%) increased their spatial visualization scores on a standardized test to the point where they were no longer considered to be at risk of dropping out of STEM due to low visualization skills. In addition, more than 350 students at UC San Diego and San Diego State University have been using the app on their smartphones as part of their classes. In a survey, 95 percent of respondents said they would recommend the app to their peers. They particularly liked having the flexibility to work with a mobile app since they could do their work anywhere and at any time—while waiting in line or waiting for the bus, for example.

In an earlier study, researchers found that some students were very persistent and retried the assignments without using hints, but others asked for hints right away, said Delson. The students who were more persistent had significantly higher gains in their standardized tests scores for spatial visualization. As a result, the current iteration of the app includes gamification to motivate students to continue trying assignments on their own, and only use hints as a last resort. “Our goal is to create a personalized learning environment that uses sketches and guided hints to elicit effective learning,” said Van Den Einde. “Sketching assignments, unlike multiple-choice questions, can be retried until successful, which teaches the value of persistence.”

eGrove Education currently serves 18 colleges, three high schools and one middle school and over 2000 students have used the app.  The grant also will allow the startup to expand and develop other products based on a learning environment where students can freehand sketch on a touchscreen device and receive personalized grading feedback and hints to improve their conceptual understanding and promote student persistence. Caption: A student and a teaching assistant use the Spatial Vis Engineering app developed by eGrove in class. 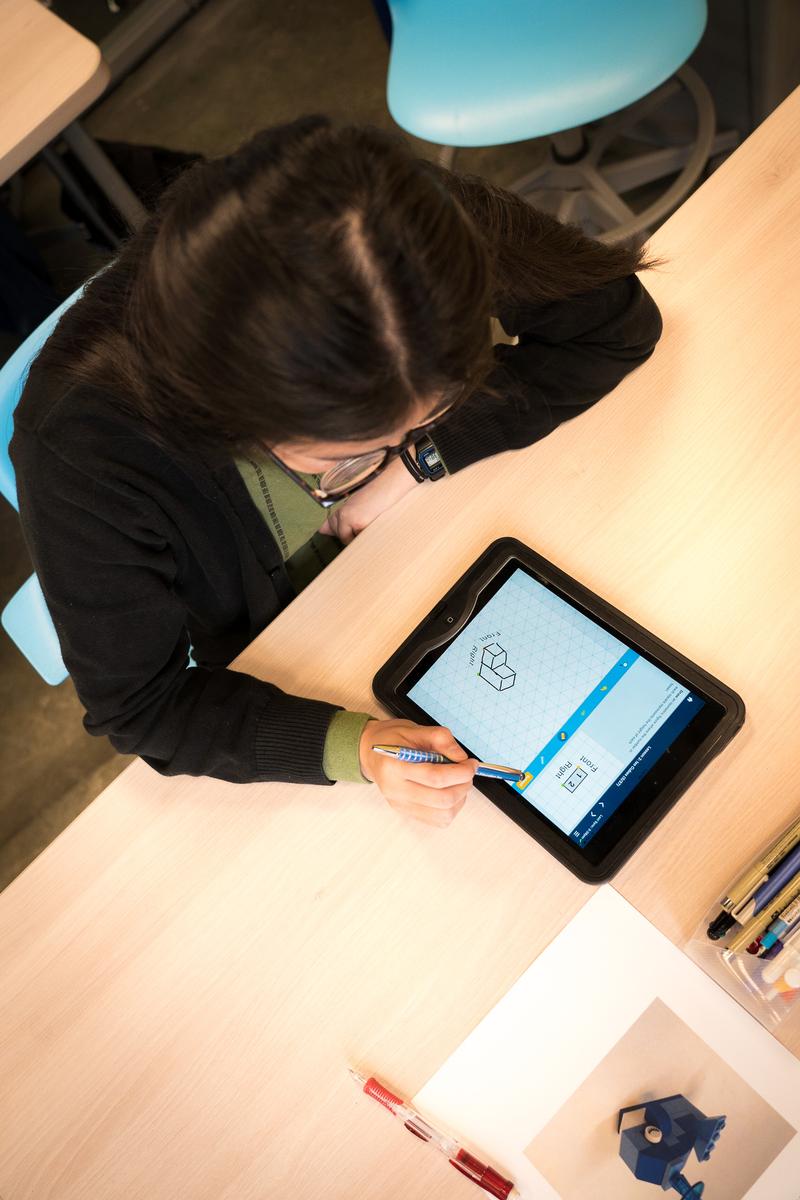 Caption: A student uses the app on a tablet.