This Is Why Testicular Cancer Is So Responsive to Chemo 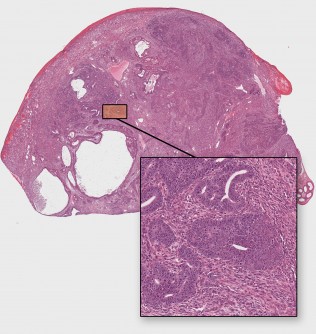 A low magnification image of a germ cell tumor, called a teratocarcinoma, from a new mouse model developed to study testicular cancer. A cluster of cancer stem cells, termed embryonal carcinoma, is shown at higher magnification at the bottom.

Newswise — ITHACA, N.Y. – Cornell researchers have taken a major step toward answering a key question in cancer research: Why is testicular cancer so responsive to chemotherapy, even after it metastasizes?

Newswise — Professional cyclist Lance Armstrong, for example, had testicular cancer that spread to his lung and brain, yet he made a full recovery after conventional chemotherapy.

The key to such success appears to lie in the cancer’s stem cells, which are more sensitive to chemotherapy than stem cells found in other types of cancer. Defining why testicular cancers are so susceptible to chemotherapy could eventually provide insights for treating other, more resistant cancers.

The group’s study, published today in the journal Cell Reports, also helped confirm that risk for testicular cancer is determined in utero. The research offers some evidence to support a hypothesis that, in humans, testicular cancers are initiated during embryonic development and lay dormant for 18 to 35 years.

“The study provides new insights into the basis for the responsiveness of testicular cancer to chemotherapy, which has always been an intriguing observation, but the basis for it was not clear,” said Robert Weiss, professor of biomedical sciences at Cornell’s College of Veterinary Medicine and senior author of the study. Timothy Pierpont, a graduate student in Weiss’ lab, is the paper’s first author.

Most types of tumors contain distinct populations of cells. A small fraction of these are stem cells, which have the ability to grow new tumors from a single cell and – in most cancers – are extremely resistant to therapy. Often, other types of tumor cells are killed off during treatment, but cancer stem cells survive, then drive relapse by re-growing new tumors.

But “when testicular cancer stem cells are exposed to chemotherapy, those stem cells are actually more sensitive to it than other cells in the tumor,” Weiss said.

The fact that stem cells in testicular cancer are so sensitive to treatment explains why therapy is more effective overall, Weiss said.

In the study, Pierpont, Weiss and colleagues created a mouse model that, for the first time, can accurately mimic the properties of testicular cancers found in humans. In particular, the engineered mice used in the study develop cancers with the strongest expression of stem cell markers reported to date. The mouse model accurately duplicates realistic tumor characteristics, such as the rate of tumor growth and the ability to give rise to several different tumor cell types.

While other cancers are known as diseases of the elderly, testicular cancers generally strike between the ages of 18 and 40, with rates dropping in older men. Using the mouse model, the researchers reported that germ cells become susceptible to developing into testicular cancer only during a restricted period of embryonic development. As they age, they become resistant to transformation.

In the mouse model, the researchers found that genetic risk factors can make embryonic germ cells malignant, but when adult germ cells are exposed to the same conditions, those cells die instead of giving rise to a tumor.

“This observation aligns well with human epidemiological data and leads to a number of intriguing questions about what makes embryonic germ cells vulnerable to developing into cancer and how adult germ cells can fend off the same challenges,” Weiss said.

Future work may provide clues for treating other cancers if researchers can identify what features of the testicular cancer stem cells make them responsive to chemotherapy and compare those features in other tumor types, Weiss said.

The study was funded by New York State Stem Cell Science and the National Cancer Institute’s Provocative Questions Initiative. Spearheaded by Harold Varmus, Nobel laureate and the Lewis Thomas University Professor of Medicine at Weill Cornell Medicine, the initiative aims to identify key questions in cancer biology, including why certain cancers can be cured by conventional chemotherapy alone.