This Valentine’s Day, Speak The Language Of Flowers 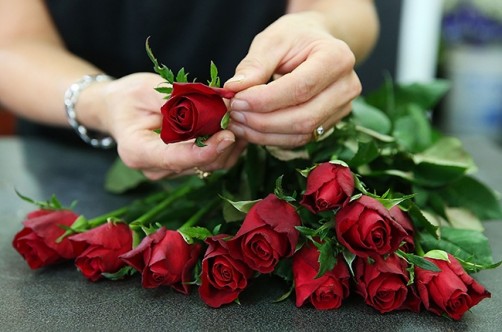 A florist prepares a bunch of roses as Sydneysiders prepare for Valentine’s Day on February 12, 2014 in Sydney, Australia.

Newswise — While it would be easy to buy a dozen roses to profess your love to a significant other this Valentine’s Day, understanding the language of flowers could help you take your floral overture to the next level.

Bill McKinley, director of Benz School of Floral Design and senior lecturer in the Department of Horticultural Sciences at Texas A&M University, says that a varied arrangement assembled with thoughtful design and the Victorian language of flowers can help maximize the sentiment of love.

“Multiple flowers can mean the same thing,” McKinley said. “Roses can mean love, but so can tulips. If you wanted to make a strong statement you would use a combination of those flowers and use foliage that has a similar sentiment.”

The language of flowers, also known as floriography, gained interest in Victorian England as a way to send messages and express feelings that could not be spoken aloud in Victorian society.

For example, while a red rose can express love, a yellow rose could signify a decrease in love or jealousy. If during graduation season you purchase an arrangement for a graduate, avoid geraniums, as it implies folly or stupidity.

At the end of the day, expressions of love through flowers have historically been in the eye of the beholder.

“The problem with the whole system is there was more than one dictionary,” McKinley said. “One well respected socialite would say red and pink roses mean this or that, and when someone on the other side of town said something else, they didn’t jive. You had to make sure the person could decode it.”

A carefully curated arrangement by a florist can wow the recipient if they’re fluent in the language of flowers. According to McKinley, this language can also carry over to plants that can be implemented on Valentine’s Day.

“I think a combination of cut flowers and plants will always be greatly appreciated because of their longevity,” McKinley said. “You could have a basket or a planter of azalea or some small roses.”

As with spoken language, the language of flowers changes slightly with time, but the core tenets stay the same.

“The foundations of floral design are based on elements and principals of design and they stay pretty consistent. However, the art or floral art has definitely changed over the years, it’s a living and breathing art forms that reflects current design styles and trends.