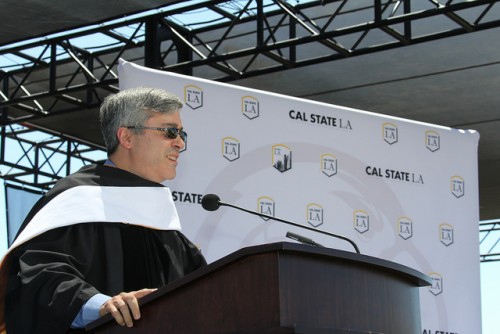 MALDEF President Thomas A. Saenz was conferred an honorary degree during the Commencement ceremony for the College of Natural and Social Sciences at Cal State LA.

A distinguished civil rights attorney and longtime champion for diversity and social justice, Saenz has been a leading advocate for Latino and immigrant communities and has strived to ensure educational opportunities for all Americans.

During his keynote address, Saenz urged graduates to “live each day of your post-graduate careers with appropriate audacity.”

“I mean not only that you pursue with vigor your ambitions…but to change our nation and our world for the better,” Saenz said to graduates of the College of Natural and Social Sciences.

“But I also mean with appropriate audacity that you begin tomorrow, and pursue every day, committed to speaking your truth, acquired through your education and experience, and speaking on behalf of your community. You all know that you graduate in interesting and challenging times.”

He was a leader in the successful legal challenge to California's divisive Proposition 187, which sought to deny public benefits to undocumented immigrants but was ruled unconstitutional. Saenz also served as MALDEF's lead counsel in two court challenges to California's Proposition 227, an English-only education initiative. He has litigated numerous other civil rights case in the areas of immigrants' rights, education, employment and voting rights.

Saenz was selected as one of Hispanic Business Magazine's “100 Top Influentials.” He received the Professional Achievement Award from the Mexican American Bar Foundation, and the National Hispanic Bar Association presented him with the Ohtli Award, which recognized his public service on behalf of Mexican American communities.

William A. Covino, president of Cal State LA, said Saenz’s deep commitment to ensuring educational opportunities for all parallels the work of the University.

“Thomas Saenz embodies Cal State LA’s mission of engagement, service, and the public good,” Covino said. “We are pleased and proud to confer upon him a Doctor of Humane Letters.”