"Developing Drugs that Protect Against Radiation" 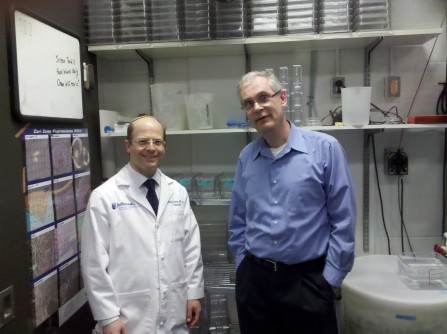 Newswise — PHILADELPHIA—Shortly before Japan’s devastating nuclear incident, researchers at Thomas Jefferson University and Hospitals received an award to find novel drugs to treat people exposed to dangerous amounts of radiation in the wake of a nuclear terrorist attack or a nuclear accident.

Although a coincidence, the timing and the awards, given to six institutions under the National Institute of Allergy and Infectious Disease’s Centers for Countermeasures Against Radiation (CMCR) program, further highlighted the pressing need for new types of drugs.

“The incident in Japan made me realize just how important and pertinent this work is,” said lead researcher Ulrich Rodeck, M.D., Ph.D., a professor in the Department of Dermatology and Cutaneous Biology at Jefferson Medical College at Thomas Jefferson University, whose team received $75,000 for the pilot project that builds on six years of research. “We’re taking the next step to develop better drugs to help mitigate damage from high exposure to radiation.”

Dr. Rodeck, along with Adam P. Dicker, M.D, Ph.D., professor and chairman of the Department of Radiation Oncology at Jefferson, has been working on testing new drugs for radiation exposure in zebrafish since 2004. While their primary aim has been to identify compounds that could be useful in cancer treatments by protecting normal tissue against the harmful effects of radiation therapy, the research serves another purpose.

“On the one hand it could help protect the cancer patient who is treated with radiation, while on the other it may help to alleviate the kind of problems that we see right now unfolding in Japan,” said Dr. Rodeck.

The work being done at Jefferson is part of a major research effort to develop medical products to diagnose, prevent and treat the short- and long-term consequences of radiation exposure that’s supported by the NIH’s National Institute of Allergy and Infectious Disease’s CMCR program.

Only seven institutions have been tasked with this charge. Thomas Jefferson University researchers are working with Chandan Guha, M.D., Ph.D, who is the principal investigator of the new CMCR recently established at Albert Einstein Medical Center in New York, one of the institutions chosen.

Their effort builds on the use of zebrafish to study molecular mechanisms of damage by radiotherapy. Dr. Dicker’s laboratory program uses this model organism in conjunction with nanotechnology drugs to identify novel radiation protectors and mitigators. This latest project will take the research into mice.

The proposed experiments focus on using small molecule agents that can be taken orally and stockpiled for quick access.

“The drugs we are working on would be of potential benefit to the workers who had to go in and repair the reactor or anyone in close proximity to a disaster of this kind,” Dr. Rodeck said.

Read the Daily Dose @ Jefferson blog post for more on Jefferson’s ongoing effort to develop new ways to protect patients and the public from radiation. Also, check out the YouTube video of Drs. Adam Dicker and Ulrich Rodeck talking about their zebrafish model to test radiation drugs.