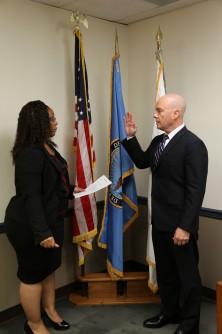 Richard W. Thomas, MD, DDS, was sworn in as the sixth President of the Uniformed Services University of the Health Sciences, July 25, 2016.

Newswise — Bethesda, MD (July 26, 2016) -- Richard W. Thomas, MD, DDS, was officially sworn in as the sixth President of the Uniformed Services University of the Health Sciences in a small ceremony on the University campus today.

As president, Dr. Thomas is responsible for the academic, research and service mission of the university. He advises the Assistant Secretary of Defense for Health Affairs and the four Surgeons General on a wide array of issues related to graduate health professions education and healthcare research.

“It is my great honor and privilege to join USU as President. USU is a tremendous institution with an outstanding reputation that is directly attributable to its strong tradition of interdisciplinary collaboration and to its many dedicated and talented faculty, staff, students and alumni. I look forward to the opportunities we will have to advance education, research, clinical care and readiness for our nation's military and federal health systems,” said Thomas.

Thomas retired from the Army in May 2016 at the rank of Major General. He is a physician and dentist whose last assignment was as Chief Medical Officer and Director of the Defense Health Agency Healthcare Operations Directorate.

Thomas graduated from the West Virginia University on an ROTC scholarship in 1981. He is a graduate of the WVU School of Dentistry and served in the U.S. Army Dental Corps before receiving his Doctor of Medicine degree from the WVU School of Medicine in 1994. He earned a master’s degree in Strategic Studies from the U.S. Army War College in 2006.He completed his internship at Brooke Army Medical Center, Fort Sam Houston, Texas, and residency in Otolaryngology/Head and Neck Surgery at Madigan Army Medical Center, Fort Lewis, Wash.

Among his many military assignments, Thomas served as the Surgeon General for the U.S. Forces – Afghanistan, and Senior Medical Advisor for the International Security Assistance Forces Joint Command – Afghanistan; assistant Army Surgeon General for Force Projection; and commander of Blanchfield Army Community Hospital at Fort Campbell, Ky. He was deployed for Operation Just Cause, Operation Enduring Freedom and Operation Iraqi Freedom. Thomas previously served as the director of the Department of Surgery Research Program at Madigan Army Medical Center, and held a faculty appointment as clinical associate professor at the University of Washington in Seattle. He also served as adjunct faculty and staff surgeon at the Swedish Medical Center in Seattle and American Lake Veteran’s Administration Hospital in Tacoma. He is a Diplomate of the American Board of Otolaryngology/Head and Neck Surgery, and is board certified in Otolaryngology/Head and Neck Surgery. He is also a Fellow in the American College of Surgeons.

About the Uniformed Services University of the Health Sciences:The Uniformed Services University of the Health Sciences, founded by an act of Congress in 1972, is the nation’s federal health sciences university and the academic heart of the Military Health System. USU students are primarily active duty uniformed officers in the Army, Navy, Air Force and Public Health Service who receive specialized education in tropical and infectious diseases, TBI and PTSD, disaster response and humanitarian assistance, global health, and acute trauma care. A large percentage of the university’s more than 5,300 physician and 1,000 advanced practice nursing alumni are supporting operations around the world, offering their leadership and expertise. USU also has graduate programs in biomedical sciences and public health committed to excellence in research, and in oral biology. The University's research program covers a wide range of clinical and other topics important to both the military and public health. For more information about USU and its programs, visit www.usuhs.edu.