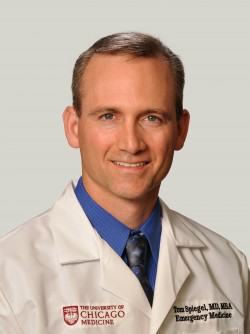 Spiegel served as the Emergency Department’s Medical Director since 2014, as well as the Interim Chief for the Section of Emergency Medicine since January 2022. The interim position will now be held by Ira Blumen, MD, also effective November 1.

“In his new role, Dr. Spiegel will provide executive oversight of the health system’s efforts in clinical quality — with an emphasis on promoting high reliability care by leveraging rigorous analytics, evidence-based practice and meaningful alignment and accountability,” said Stephen Weber, MD, Executive Vice President for Clinical Effectiveness and Chief Medical Officer at UChicago Medicine. “He will work closely with faculty, staff, trainees and other clinical excellence leaders in sustaining achievements in patient safety, accelerating work in value-based care and supporting efforts to promote ease of practice and clinician engagement.”

In his prior role, Spiegel was responsible for overall clinical performance and operations, including patient flow, medical care and operational efficiency. During his tenure, patient ED volumes nearly doubled while overall left-without-being-seen percentages reduced significantly. Spiegel also served as a key medical team member in the planning and the 2017 opening of a new adult emergency department, and in the hospital becoming a Level 1 adult trauma center in 2018. Additionally, he has overseen the ED’s response during the ongoing COVID-19 pandemic.

Prior to joining UChicago Medicine in 2014, Spiegel served as the vice president of business strategy and operations support for Marriott International, an analyst for the Federal Reserve System and a consultant for the Small Business Administration.

“Dr. Blumen is an expert on air medical transport and critical care transport, with more than two decades of conducting unique safety research on helicopter emergency medical services (HEMS),” said Everett Vokes, MD, Chair of the Department of Medicine and Physician-in-Chief at UChicago Medicine. “His work has resulted in dozens of presentations across the country and an invitation from the National Transportation Safety Board to present his findings at a public hearing in February 2009.”

As an educator and mentor, Blumen is dedicated to training the next generation of physicians in emergency medicine. He serves as one of the faculty for the Emergency Medical Services Fellowship Program, and has mentored, supervised and trained countless emergency medicine residents in the adult ED.

For the past 35 years, Blumen has served as the medical director and program director of the University of Chicago Aeromedical Network (UCAN), which provides rapid helicopter transport of critically ill or injured neonatal, pediatric and adult patients. A recognized regional and national leader in the field, he has served on the board of directors of the Association of Air Medical Services and was a founding member, board member and past president of the Air Medical Physician Association (AMPA).

He has received numerous awards in recognition of his significant contributions to air medical transport research, education and development or promotion of aviation and aviation safety. In 2013, Blumen was awarded the AMPA Medical Director of the Year, honoring his contributions and achievements in the field of aeromedical transport and as medical director of the UCAN flight program. In 2020, he was elected as a fellow in the Air Medical Physician Association, recognizing his contributions to AMPA and the specialty of air and critical care transport medicine.