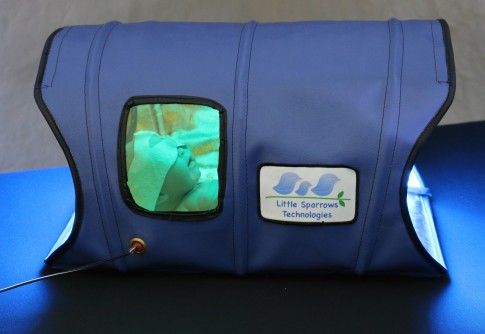 The Bili-Hut is a portable phototherapy device for treating neonatal jaundice in newborns.

Funded by the U.S. Food and Drug Administration and based at The Children’s Hospital of Philadelphia, the PPDC provides know-how and seed funding to help innovators translate promising ideas into commercial medical devices for use in children.

The Consortium is providing seed grants of $25,000 each to three of the 19 innovators that responded to the PPDC’s request for proposals in June, 2014: Little Sparrows Technologies of Boston, OtoNexus of Seattle, and Ras Labs of Hingham, Mass.

“Our request for proposals sought projects from academia and industry from around the globe,” said bioengineer Matthew R. Maltese, Ph.D., of The Children’s Hospital of Philadelphia, the Consortium’s executive director and principal investigator. “All projects were rigorously reviewed by our clinical and industry experts, and we are excited to fund these innovators of promising medical devices for children.”

--The Bili-Hut, proposed by Little Sparrows Technologies, is a portable, high-intensity phototherapy device for treating newborns with neonatal jaundice. Neonatal jaundice is common in newborns, and when it doesn’t resolve on its own, may cause brain damage. The condition responds to phototherapy, typically provided by fluorescent lights. Little Sparrows, under founder and CEO Donna Brezinski, M.D., offers a three-pound, collapsible enclosure that uses low-energy-requiring LED lights, enabling use with either line power or alternative sources such as a 12-volt battery. It is designed for use in medically underserved areas; the company is doing pilot studies in India.

--A handheld ultrasound tool from OtoNexus is designed to rapidly and accurately diagnose middle ear infections, called otitis media, by detecting fluid behind a child’s eardrum. It also identifies the type of fluid, which is crucial to making a correct diagnosis (currently half of diagnoses are in error). Obtaining more accurate diagnoses could lower unnecessary antibiotic usage and reduce medical costs (currently over $5 billion per year), attributed to otitis media.

--A polymer-based material from RasLabs could improve the interface between a child’s prosthetic limb and the residual limb. Without using gears or motors, the material contracts or expands like muscle, in response to low-voltage electricity. Using this biomimetic material to line the socket of a pediatric-sized artificial leg or other limb could provide a more snug fit of the prosthetic device during normal daily use, and improve a child’s experience in using it. The device is currently early in development. RasLabs is led by its founder, Lenore Rasmussen, Ph.D.

The PPDC plans to issue the next request for proposals for this funding opportunity in March. “While this funding program is competitive,” added Maltese, “the PPDC also offers non-competitive in-kind support to innovators with medical device technologies for the pediatric population.”