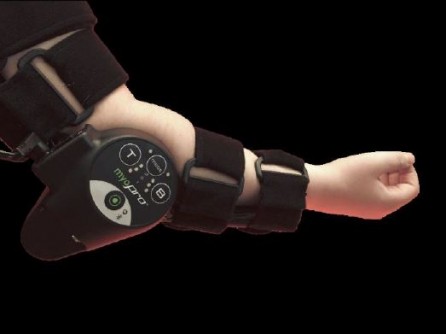 The MyoPro device is a powered orthotic brace that amplifies weak muscle signals in a patient's arm. 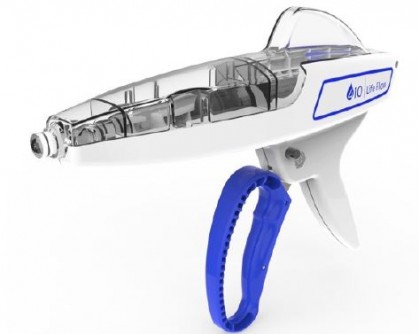 The Life Flow device is a hand-powered infuser that rapidly delivers fluids to a critically ill patient.

The devices under development are a powered orthotic arm brace that amplifies weak nerve signals, a hand-operated rapid blood delivery system for emergency situations and a device that gradually corrects deformed ears in babies.

Funded by the U.S. Food and Drug Administration and based at Children’s Hospital of Philadelphia (CHOP), the PPDC provides know-how and seed funding to help innovators translate promising ideas into commercial medical devices for use in children. The PPDC is a collaboration among CHOP, Drexel University and the University of Pennsylvania. New this year, the PPDC partnered with the Childress Institute for Pediatric Trauma to fund a device that can be used during the so-called “golden hour of care” immediately following a traumatic injury.

The new round of awards is the third by the PPDC, following seed grants announced in February 2015 and January 2016.

“We are once again delighted to support promising, innovative medical devices geared to the unmet clinical needs of children,” said engineer Matthew R. Maltese, PhD, of Children’s Hospital of Philadelphia, the Consortium’s executive director and principal investigator. He added that extra support dedicated to pediatric trauma allowed the PPDC to support a third award in this round of grants.

Myomo, Inc., of Cambridge, Mass., is developing a powered orthotic device to assist with motion and function in children with neuromuscular disorders. The MyoPro Motion-K© device is a child-sized version of the company’s MyoPro© device, a custom-fabricated brace that assists patients with a weak or deformed arm in performing activities of daily living. The device amplifies weak muscle signals to help patients move and use their arms.

A device designed by EarGear, LLC, of Philadelphia, aims to correct ear deformities in infants. The EarGear System uses silicon conformers placed along the ear to reshape and correct the deformity over time. It would avoid the need for costly, labor-intensive and painful surgical procedures.

The third seed grant will go to 410 Medical, Inc. of Durham, N.C., for the Life Flow© device, a hand-powered infuser used to quickly deliver fluids to critically ill patients. A newer version of the Life Flow© is in development for rapid delivery of blood products in patients with severe hemorrhage. The grant will enable the company to conduct research supporting a second FDA application for blood delivery, which will have important applications for the care of injured children.

The PPDC is currently reviewing proposals for its fourth round of funding opportunities, and will announce the award recipients later this year. Applications are accepted from throughout the U.S. and from foreign companies. The Consortium also accepts applications year-round for in-kind services and expert advice.

For more information, visit www.phillypediatricmeddevice.orgb>About Children’s Hospital of Philadelphia: Children’s Hospital of Philadelphia was founded in 1855 as the nation’s first pediatric hospital. Through its long-standing commitment to providing exceptional patient care, training new generations of pediatric healthcare professionals and pioneering major research initiatives, Children’s Hospital has fostered many discoveries that have benefited children worldwide. Its pediatric research program is among the largest in the country. In addition, its unique family-centered care and public service programs have brought the 535-bed hospital recognition as a leading advocate for children and adolescents. For more information, visit http://www.chop.edu.