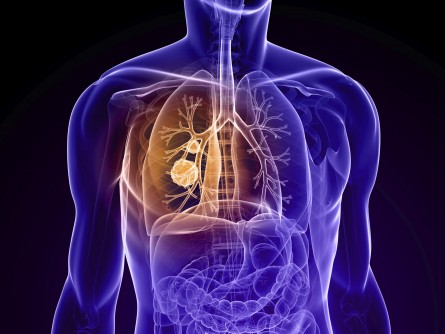 Newswise — Despite advances made in detecting and treating nonsmall cell lung cancer, its prognosis remains grim. Even patients whose cancers are caught at their earliest stage have only a 50 percent chance of five-year survival. This poor prognosis is due in part to the cancer's ability to resist treatment, rendering the chemotherapy ineffective.

However, a group of City of Hope researchers have identified and synthesized a novel compound — called COH-SR4 — that is effective against drug-resistant lung cancer. If its safety and efficacy pan out in future studies, COH-SR4 could play a vital role in treating lung cancers that no longer respond to first-line chemotherapy.

The COH-SR4 findings will be presented at the American Association for Cancer Research (AACR) annual meeting in San Diego on Monday, April 7.

"Based on the chemical structure of COH-SR4, we hypothesized that it caused cancer cell death by inhibiting the antioxidant activity of the mercapturic acid pathway," said Sanjay Awasthi, M.D., professor at City of Hope's Department of Medical Oncology & Therapeutics Research and senior author of the study.

In earlier studies, Awasthi and his colleagues found that nonsmall cell lung cancer and melanoma are responsive to the anti-cancer properties of COH-SR4, which was originally developed to suppress fat cell development and has also been found to improve glucose control and insulin sensitivity.

After observing the cancers' response, the researchers tested COH-SR4 on several types of lung cancer — including types that are treatment-resistant — in cell culture and animal models.

In the AACR presentation, Awasthi and his colleagues report that COH-SR4 did lead to lung cancer cell death without showing any toxicity in normal tissue.

Also, in a previously published paper in the journal Biochemical Pharmacology, Awasthi's team found that after two months of administering COH-SR4 orally to animal models, the average mass of lung cancer tumors in the treatment group were less than half of those in the control group (0.77 and 2.02 grams, respectively,) demonstrating that the drug inhibited tumor growth.

Additionally, they confirmed that COH-SR4 did work through inhibition of the mercapturic acid pathway, which then deactivated multiple pathways that protect cancer cells while simultaneously activating pathways that induce cancer cells' self-destruction.

In the paper, they concluded that "the results from our in-vitro and in-vivo studies reveal that COH-SR4 represents a novel candidate ... to target aggressive and drug-resistant lung cancers" and are working on further preclinical research in order to apply for human trials with the Food and Drug Administration, as well studying COH-SR4's ability to fight other cancers, diabetes and obesity.