Published in the New England Journal of Medicine, this is the first-ever randomized trial of thymectomy 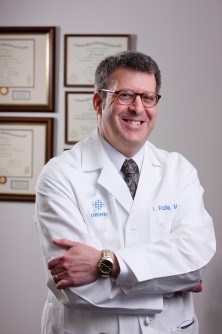 “Until this study, the only evidence was from non-randomized studies that contained significant bias issues,” said Wolfe, who led the international study.

Newswise — BUFFALO, N.Y. –- A new study in the New England Journal of Medicine addresses a question doctors have sought to clarify for decades: whether a surgery conducted since the 1940s benefits the patients it targets.The study to be published August 11 (available online on August 10 at 5 p.m.) found that surgical removal of the thymus gland from patients with myasthenia gravis, a rare autoimmune disease that affects neuromuscular function, provides significant benefit in patients who do not have a chest tumor.

Myasthenia gravis (MG) results from an immune-mediated disruption of communication between nerve and muscle – the neuromuscular junction. Symptoms may include droopy eyelids; blurred or double vision; difficulty speaking, swallowing and breathing; and muscle weakness. Some patients develop thymoma, a benign tumor of the thymus gland. The disease affects as many as 60,000 Americans and its incidence has been increasing, in part as a result of improved diagnostic techniques and an aging population.

The new study provides a definitive answer that neurologists have sought for decades, according to Gil I. Wolfe, MD, Irvin and Rosemary Smith Chair of the Department of Neurology in the Jacobs School of Medicine and Biomedical Sciences at the University at Buffalo, clinical chair of the worldwide study and first author.

Solid confirmation“These findings solidly confirm the early use of thymectomy in managing myasthenia gravis,” he said. “These findings tell patients they can be even more assured that thymectomy is a positive step to take in the management of their condition.”

Since the 1940s, thymectomy has been used in MG patients, both in patients with a chest tumor called thymoma and those without. Wolfe said it is widely accepted that patients with a thymoma need to have it surgically removed. But the data have not been as clear in MG patients who do not present with a tumor. “Until this study, the only evidence was from non-randomized studies that contained significant bias issues,” said Wolfe, an expert on neuromuscular disorders with a special focus on MG, who was awarded the 2015 Doctor of the Year award from the Myasthenia Gravis Foundation of America. Wolfe sees patients through UBMD Neurology at Buffalo General Medical Center.

Around 2000, when he was at the University of Texas Southwestern, Wolfe worked with colleagues in the field, John Newsom-Davis, MD; Henry Kaminski, MD; Fred Jaretzki, MD and Gary D. Cutter, PhD, to develop a study that would provide the data that neurologists needed to correctly assess the value of thymectomy. The global study is the longest and one of the largest randomized studies in the history of MG. It ran from 2006 until 2012 with 126 patients with MG who participated in centers located on almost every continent. It judged the effectiveness of thymectomy by comparing disease status of patients and how much of the corticosteroid prednisone they needed after the surgery compared to patients who did not have surgery.

Less prednisoneThe study found that thymectomy patients needed approximately one-third less prednisone to control their disease than did those who did not have the surgery. Their need for steroid-sparing immunosuppresants, such as azathioprine, was reduced by nearly two-thirds.

Wolfe said: “We were quite satisfied to see that thymectomy conferred benefits on disease status measures by the Quantitative Myasthenia Gravis (QMG) score, reduced the need for corticosteroids and other immunosuppressants, reduced hospitalization needs, and also, according to most measures, reduced the side effect burden.”

Only a few decades ago, approximately a third of all patients with MG died from it, but new diagnostic techniques and treatments have dramatically improved both the quality of life and longevity of patients. Today, the lifespan for myasthenia gravis patients matches that of the general population.

Founded in 1846, the Jacobs School of Medicine and Biomedical Sciences at the University at Buffalo is beginning a new chapter in its history with the largest medical education building under construction in the nation. The eight-story, 628,000-square-foot facility is scheduled to open in 2017. The new location puts superior medical education, clinical care and pioneering research in close proximity, anchoring Buffalo’s evolving comprehensive academic health center in a vibrant downtown setting. These new facilities will better enable the school to advance health and wellness across the life span for the people of New York and the world through research, clinical care and the education of tomorrow’s leaders in health care and biomedical sciences. The school’s faculty and residents provide care for the community’s diverse populations through strong clinical partnerships and the school’s practice plan, UBMD Physicians’ Group.