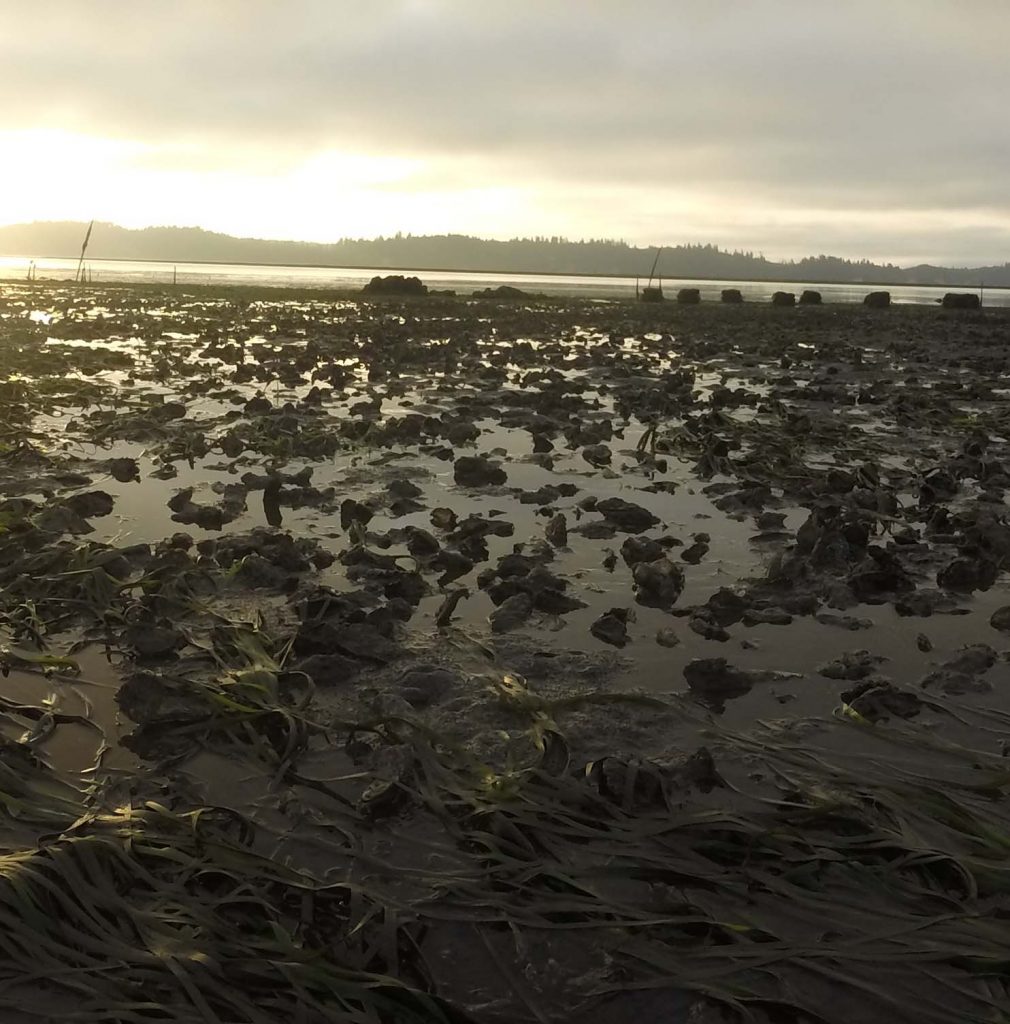 Dawn in Willapa Bay in 2015, showing oysters on a tidal flat. 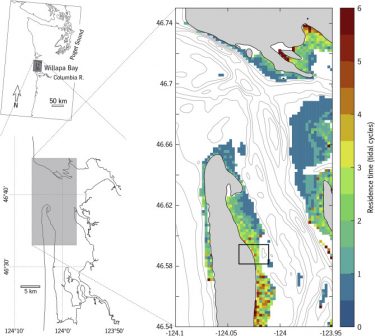 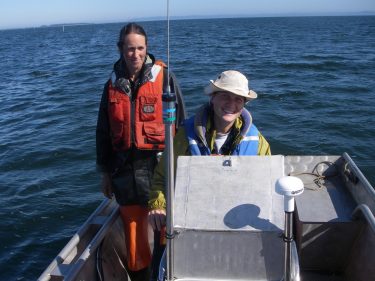 Jennifer Ruesink, left, and Eli Wheat, right, in Willapa Bay in 2007 when this study began.

Newswise — By area, tidal flats make up more than 50 percent of Willapa Bay in southwest Washington state, making this more than 142-square-mile estuary an ideal location for oyster farming. On some parts of these flats, oysters grow well, filling their shells with delicacies for discerning diners. But according to experienced oyster farmers, oysters raised in other parts of Willapa Bay don't yield as much meat.

Now, scientists may have an explanation for this variability. In a paper published online July 26 in the journal Estuarine, Coastal and Shelf Science, researchers at the University of Washington and the University of Strathclyde report that the water washing over the Willapa Bay tidal flats during high tides is largely the same water that washed over the flats during the previous high tide. This "old" water has not been mixed in with "new" water from deeper parts of the bay or the open Pacific Ocean, and has different chemical and biological properties, such as lower levels of food for creatures within the tide flats.

The team, led by Jennifer Ruesink, a UW professor of biology, employed oceanographic modeling and water quality readings to show that high-tide water flowing over the Willapa Bay flats can take as many as four tidal cycles — or about two days — before it is fully replaced by "new" water. Through field experiments measuring oyster growth, they found that this slow turnover has consequences for the creatures that call Willapa Bay home.

Their findings overturn a prior assumption about tides.

"Previously, there had been this belief that when water drains off of tide flats or out of a bay, currents and wind mix that water up," said lead author Eli Wheat, a UW instructor in the College of the Environment who conducted this study as a doctoral student in the UW Department of Biology. "It turns out that this is not necessarily true. It takes multiple tidal cycles for this mixing to occur."

To determine water turnover rates in Willapa Bay, Ruesink and Wheat partnered with Neil Banas, an oceanographer at the University of Strathclyde in Glasgow, who modeled water "residence times" and circulation in Willapa Bay using data on the bay's depth profile, the rivers that feed into it and its outlet to the Pacific Ocean. The model predicted that high-tide waters over the flats have residence times ranging from zero to four tidal cycles — depending on location in the bay — before it is fully replaced by "new" water from deeper channels. On stretches of tidal flats more than one kilometer long, generally water over near-shore flats had longer residence times than flats farther from shore.

"It's a bit of a paradox: We can walk across those flats at low water, so how can water stay there for more than a couple of hours between successive low tides?" said Ruesink. "Now we've discovered a new explanation for the quality of oyster beds, which doesn’t depend on how much time they spend under water, but rather on the history of the water that reaches them."

The team collected data directly from the bay. They used a network of sensors — some free-floating, others at fixed positions — to collect information such as water depth, temperature, salinity and the amount of chlorophyll present. All of those water properties varied throughout the bay. Temperature varied primarily according to the tidal cycle, while variations in salinity and chlorophyll throughout Willapa Bay were more consistent with their model of water residence times. One of the key differences between "old" and "new" water is that "old" water contains less chlorophyll and is usually lower in salinity.

The team also measured oyster growth on flats in sections of the bay with "old" and "new" water. In all parts of Willapa Bay, oysters grew to approximately the same shell size. But oysters grown farther from the main channel of the bay — regions with higher levels of "old" water at high tide — had trouble filling those shells with the meaty morsel that people eat. Oysters grown on flats just half a kilometer from the main channel showed a 25 percent drop in dry tissue weight per shell height compared to oysters grown closer to the channel, where "new" water arrives faster.

"Scientists have known for a long time that water residence times increase as you go deeper into bays," said Ruesink. "But this is the first time that both a model and field data show 'old' water close to shore across tidal flats."

These findings may explain why some parts of Willapa Bay — known as "fattening grounds" by oyster farmers — are better than others for generating large-biomass oysters, according to Wheat. The study also has far-reaching implications for how scientists understand the health and well-being of all creatures in tidal ecosystems like Willapa Bay. The lower levels of chlorophyll in "old" water, for example, indicate that this water contains fewer particles for filter-feeding creatures along the flats, likely because food was already taken out of the water column during previous passes over the flats. Creatures in these parts of Willapa Bay must wait longer for the bounty brought by "new" water.

Future studies would have to look at additional consequences of these longer water turnover rates, such as how pollutants are diluted and cleared from the water column, said Wheat. The team's findings add a layer of complexity to tidal environments and show definitively what experienced oyster farmers in Willapa Bay already knew: Not all tidal flats are created equal.

The research was funded by a National Oceanic and Atmospheric Administration grant to Washington Sea Grant at the University of Washington.

Caption: Dawn in Willapa Bay in 2015, showing oysters on a tidal flat.

Caption: Jennifer Ruesink, left, and Eli Wheat, right, in Willapa Bay in 2007 when this study began.