Endangered cats, including stuffed tigers, along with bear fangs and other wildlife parts, taken in raid in Aceh Province 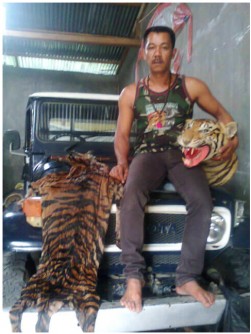 One of the tiger traders before his arrest showing off a tiger skin and a stuffed tiger head. 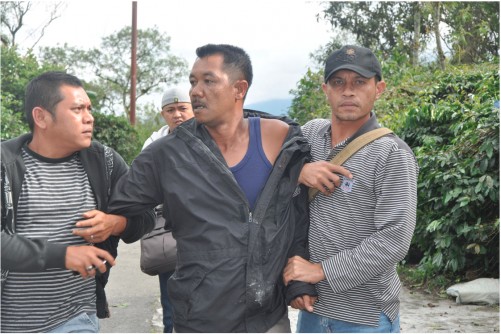 Newswise — NEW YORK (January 7, 2014) — The Wildlife Conservation Society congratulates the Aceh Police for smashing a major network of wildlife traffickers. The traffickers ran five tiger poaching gangs in the Blangkenjeran, Gayo Lues, Takengon, and Ulu Masen forest areas. The two suspects, who were caught with a variety of illegal wildlife including stuffed Sumatran tigers and other rare cats, are also connected with a known tiger kingpin operating in Medan.

WCS’s Wildlife Crimes Unit (WCU) assisted in the case. The WCU operates in Indonesia providing data and technical advice to law enforcement agencies to support the investigation and prosecution of wildlife crimes.

Along with the stuffed tigers, the police confiscated body parts from globally endangered species including, sun bears, golden cats, marbled cats, a clouded leopard, Sumatran serow, as well as leopard cats, and some birds.

Said Joe Walston, WCS Executive Director for Asia Programs: “This recent arrest shows that Indonesia is getting increasingly serious about not tolerating wildlife crime, which threaten its spectacular natural heritage. We congratulate the group of law enforcement professionals that worked together on a local, regional, and national level to make this important arrest happen.”

Dr. Noviar Andayani, Director of the WCS-Indonesia Program said: “WCS’s Wildlife Crimes Unit continues to work with Indonesian authorities to make a difference. We are hopeful that the message is getting out that if you violate wildlife laws in Indonesia, you will be caught and prosecuted.”

Last year, a military court in Takengon handed down the first-ever successful prosecutions of wildlife crimes in Aceh Province to two wildlife traffickers convicted of possessing a pair of stuffed Sumatran tigers and one stuffed sun bear. This marked only the second prosecution for wildlife crimes prosecuted by an Indonesian military court. The suspects were arrested by Takengon's military police after a three-month investigation.

WCS’s efforts to combat wildlife trafficking in Indonesia are made possible through support from the Liz Claiborne and Art Ortenberg Foundation and the Association of Zoos and Aquariums' Tiger Species Survival Plan® Program's Tiger Conservation Campaign.

Wildlife Conservation Society (WCS)MISSION: WCS saves wildlife and wild places worldwide through science, conservation action, education, and inspiring people to value nature. VISION: WCS envisions a world where wildlife thrives in healthy lands and seas, valued by societies that embrace and benefit from the diversity and integrity of life on earth. To achieve our mission, WCS, based at the Bronx Zoo, harnesses the power of its Global Conservation Program in more than 60 nations and in all the world’s oceans and its five wildlife parks in New York City, visited by 4 million people annually. WCS combines its expertise in the field, zoos, and aquarium to achieve its conservation mission. Visit: www.wcs.org; http://www.facebook.com/TheWCS; http://www.youtube.com/user/WCSMedia Follow: @thewcs 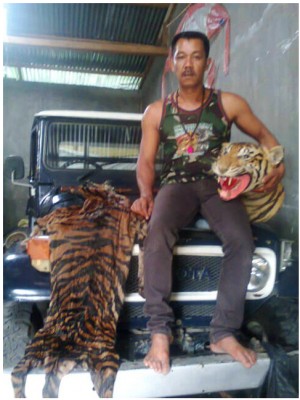 Caption: One of the tiger traders before his arrest showing off a tiger skin and a stuffed tiger head. 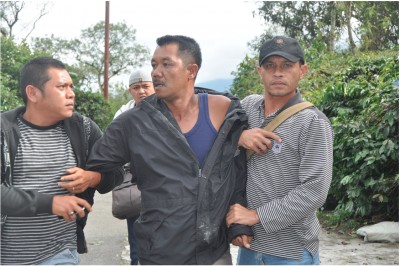