The girder bridge, which was made of Southern Yellow Pine, showed satisfactory performance and minimal damage under cyclic loading equivalent to 75 years of service, explained assistant civil engineering professor Mostafa Tazarv, structures lab coordinator and co-principal investigator for the project.  “To our knowledge, this is the first time that full-scale testing has been done on glulam timber bridges,” he said.

The aim was to provide alternatives to conventional precast double-tee bridges, for which there is only one local supplier in South Dakota. This research gives counties and townships more options when designing a new bridge or replacing an old one.

Glulam manufacturers layer the wood to reduce material variability that is inherent in natural wood and increase strength by placing higher quality material on the outer portions of the member where the stress demand is greatest, according to the U.S. Department of Transportation. “They can tailor the layers to fit the performance objectives,” explained professor Nadim Wehbe, head of the Department of Civil and Environmental Engineering and co-principal investigator for the project.

The initial construction costs for a glulam timber bridge can be anywhere from 25 to 50 percent less than a conventional bridge, Tazarv explained. Typically, the bridge can be installed in a day without the need for specialized equipment or specially trained personnel.

In addition, he explained, “The way wood is treated and the type of material used for the treatment these days are more environmentally safe.”

Overall, Tazarv concluded, “Timber bridges are structurally viable, low-cost, sustainable and durable.”  In addition, they are easy and relatively fast to construct, which shortens the road closure time.

A glulam girder bridge, which can span up to 80 feet, consists of transverse glulam deck panels supported on longitudinal glulam girders. The full-scale specimen tested was 50-feet long and 9.5-feet wide, which is approximately equal to one lane of traffic, and was composed of 13 deck panels connected to three girders using a strong epoxy adhesive. The girder bridge was designed based on the American Association of Highway and Transportation Officials (AASHTO) HL-93 truck load.

Fifteen fully loaded trucks per day typically cross a low-traffic county road bridge, according to Tazarv. To simulate this, the researchers applied a 32-kip, or 32,000 pounds-force, load to the middle of the bridge at a rate of one load per second, explained graduate student Zachary Carnahan.

“This ages the bridge in a short period of time,” Tazarv said. The bridge withstood half a million load cycles, which equates to 90 years of service. “As a general finding, the current AASHTO specifications for the design of this type of bridge are valid.”

For more information and video of bridge failure, please visit: 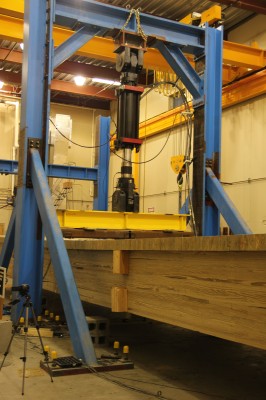 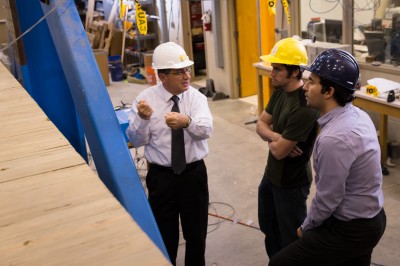