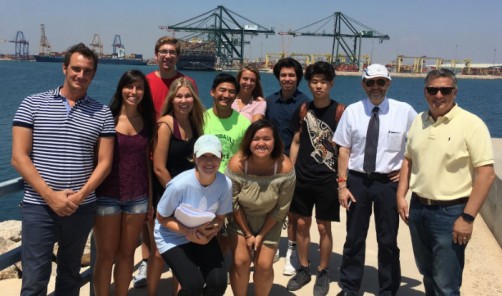 Iowa State students visit the Port of Valencia as part of a language immersion program in Spain. 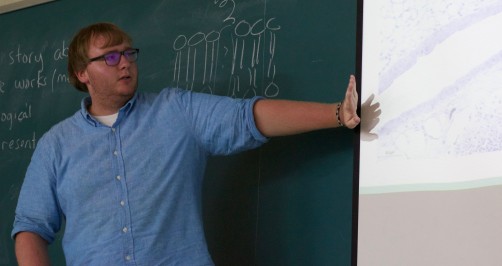 Zachary Wells presents findings of his work with a Spanish research team.

Newswise — AMES, Iowa – Getting back into the classroom after spending the summer in Spain with a group of Iowa State University students always reinforces for Chad Gasta the benefits of a language immersion program.

“It’s an incredible transformation,” Gasta said. “You see students, who were hesitant to speak in class before the trip, come back and they are among the first to raise their hands and talk.”

Gasta, a professor and chair of world languages and cultures, co-directs “ISU on the Mediterranean,” Iowa State’s largest study abroad program, which offers courses and research opportunities in Spanish, engineering, business and biology. To make it a truly immersive experience, classes are taught in Spanish and English, and students live with host families during their six weeks in Spain. Gasta says it makes for some interesting translations initially, but students welcome the opportunity to interact and communicate with native speakers.

Language immersion programs not only improve fluency and vocabulary, but also build students’ confidence in speaking the language. It is difficult to replicate that experience in a foreign language class, which may only meet for an hour a day, Gasta said. That is why he is a strong advocate for dual-language immersion programs at the elementary and secondary level. According to the Iowa World Language Association, only three public school districts in Iowa offer dual-language programs.

For Gasta, increasing opportunities to learn a second language is a no-brainer. Students who speak more than one language are better at critical thinking and problem solving, as well as interpersonal and intercultural communication, he said. It also pays off when students enter the workforce.

“We know that people who speak another language make more – about a 20 percent salary bump – and are more likely to be selected for a job or a promotion over someone else,” Gasta said.

It is a convincing argument in today’s global economy, but Gasta says money is not the only motivating factor. The Mediterranean study abroad program attracts engineering, agriculture and business majors who recognize the value of those language skills when working with international clients or coworkers. Gasta’s research found students also have a greater awareness of markets and trade policy, and develop a respect and understanding of other cultures following their time in Spain.

To date, more than 1,200 Iowa State students have participated in the program. Read more about their experience here.

Immersion at a young age

Many colleges and universities have foreign language requirements, but even so, Gasta says most students arrive at college with limited exposure to another language. Dual-language immersion programs in schools are one way to reverse that trend, he said. The program structure varies, but typically, students and teachers speak English in the morning and a second language, such as Spanish, in the afternoon or vice versa.

“We know that more exposure is better. Language is an intuitive process for children. They learn more through repetition and using the language in meaningful context, such as talking with their friends or working on a project,” Gasta said. “In other words, they’re not learning for the sake of a language, but the language is a vehicle to do math or some other task.”

Understanding the benefits of learning language at a young age, Gasta and his wife primarily speak Spanish at home with their two daughters to increase their exposure. He knows most parents cannot do that for their children, which brings his argument for expanded language opportunities full circle. 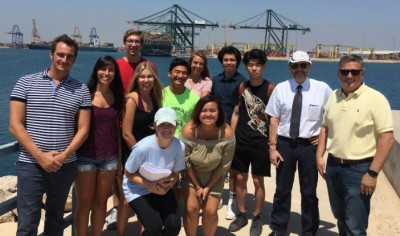 Caption: Iowa State students visit the Port of Valencia as part of a language immersion program in Spain. 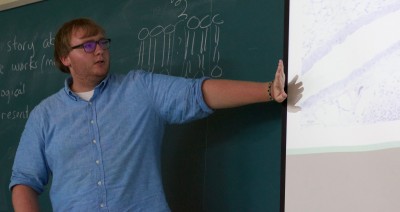 Caption: Zachary Wells presents findings of his work with a Spanish research team.