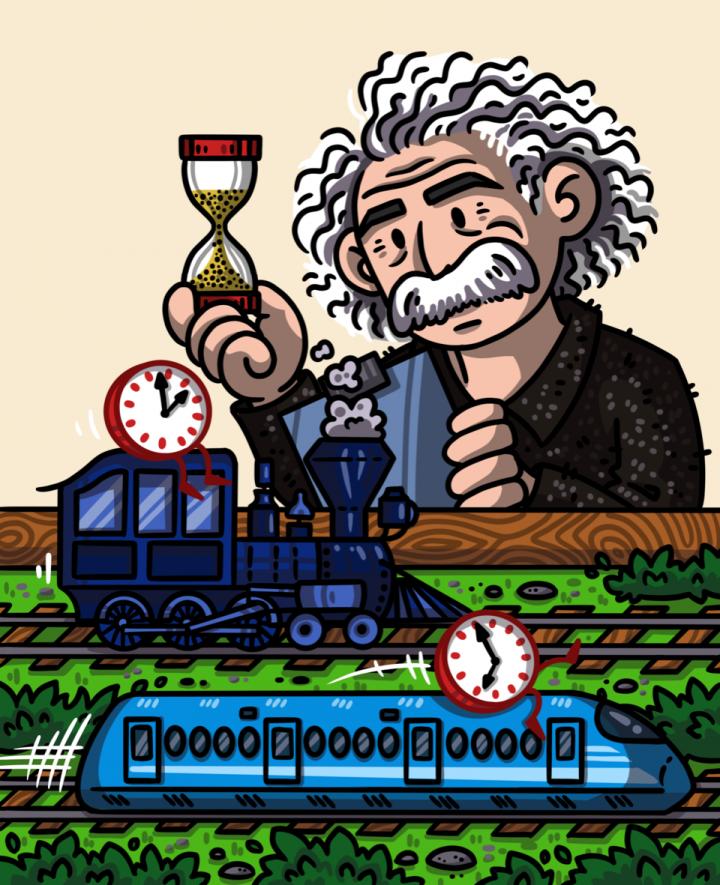 Quantum mechanics allows for a clock to move as if it were simultaneously traveling at two different speeds. New research finds that this leads to a correction in atomic clocks known as "quantum time dilation."

Newswise — HANOVER, N.H. - October 23, 2020 - A phenomenon of quantum mechanics known as superposition can impact timekeeping in high-precision clocks, according to a theoretical study from Dartmouth College, Saint Anselm College and Santa Clara University.

Research describing the effect shows that superposition--the ability of an atom to exist in more than one state at the same time--leads to a correction in atomic clocks known as "quantum time dilation."

The research, published in the journal Nature Communications, takes into account quantum effects beyond Albert Einstein's theory of relativity to make a new prediction about the nature of time.

"Whenever we have developed better clocks, we've learned something new about the world," said Alexander Smith, an assistant professor of physics at Saint Anselm College and adjunct assistant professor at Dartmouth College, who led the research as a junior fellow in Dartmouth's Society of Fellows. "Quantum time dilation is a consequence of both quantum mechanics and Einstein's relativity, and thus offers a new possibility to test fundamental physics at their intersection."

In the early 1900s, Albert Einstein presented a revolutionary picture of space and time by showing that the time experienced by a clock depends on how fast it is moving -- as the speed of a clock increases, the rate at which it ticks decreases. This was a radical departure from Sir Isaac Newton's absolute notion of time.

Quantum mechanics, the theory of motion governing the atomic realm, allows for a clock to move as if it were simultaneously traveling at two different speeds: a quantum "superposition" of speeds. The research paper takes this possibility into account and provides a probabilistic theory of timekeeping, which led to the prediction of quantum time dilation.

To develop the new theory, the team combined modern techniques from quantum information science with a theory developed in the 1980s that explains how time might emerge out of a quantum theory of gravity.

"Physicists have sought to accommodate the dynamical nature of time in quantum theory for decades," said Mehdi Ahmadi, a lecturer at Santa Clara University who co-authored the study. "In our work, we predict corrections to relativistic time dilation which stem from the fact that the clocks used to measure this effect are quantum mechanical in nature."

In the same way that carbon dating relies on decaying atoms to determine the age of organic objects, the lifetime of an excited atom acts as a clock. If such an atom moves in a superposition of different speeds, then its lifetime will either increase or decrease depending on the nature of the superposition relative to an atom moving at a definite speed.

The correction to the atom's lifetime is so small that it would be impossible to measure in terms that make sense at the human scale. But the ability to account for this effect could enable a test of quantum time dilation using the most advanced atomic clocks.

Just as the utility of quantum mechanics for medical imaging, computing, and microscopy, might have been difficult to predict when that theory was being developed in the early 1900s, it is too early to imagine the full practical implications of quantum time dilation.

Founded in 1769, Dartmouth is a member of the Ivy League and offers the world's premier liberal arts education, combining its deep commitment to outstanding undergraduate and graduate teaching with distinguished research and scholarship in the arts and sciences and its leading professional schools: the Geisel School of Medicine, the Guarini School of Graduate and Advanced Studies, Thayer School of Engineering and Tuck School of Business.