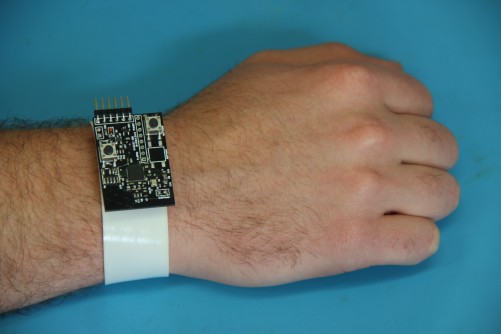 The Medcuff device, shown here in prototype form, will be enclosed in a watch-like band and have a screen with graphics. 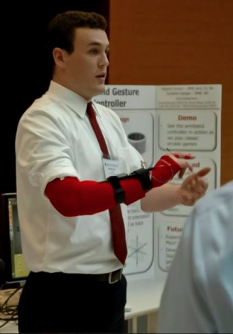 Newswise — MADISON, Wis. – At first, the students considered creating an app or a smart device. But when they got down to it, they decided simplicity really is bliss.

Now, the University of Wisconsin-Madison graduate and undergraduates’ product — designed to help people take the right medication at the right time at the right dosage — is turning heads in business and the health insurance and pharmaceutical industries for its potential to save lives and money.

A company has also shown interest in helping the ambitious team market the small, simple prototype it calls Medcuff, which debuted at the Internet of Things (IoT) open house earlier this month. There, a panel of industry leaders chose Medcuff from among five other projects as the one with the most potential impact.

“It’s like a ribbon around their finger,” says Pete Chulick, the electrical and computer engineering science Ph.D. student who built the piece of technology, designed to be worn by the user. Medcuff uses vibrations and color-coded LED lights to remind people which medications to take and when. The device would be programmed by a pharmacist using Bluetooth technology.

The idea began with Dylan Mack, an undergraduate retailing major who wanted to help improve medication adherence, especially among the elderly. He posed the challenge during the first informational meeting of the brand new IoT Lab, which launched in early February.

Students from engineering, computer science and retail met and came together at IoT to take their ideas from concept to realization in just over two months. The lab provides unique, cross-disciplinary opportunities for diverse individuals to collaborate.

“We were going to do a smartwatch but we considered our target demographic and many of them may not even have Internet access,” says Katie Sullivan, a mechanical engineering major who is also part of the team.

It made sense to think complex, initially. One of the ideas behind Internet of Things is to leverage existing technologies to solve big problems. In IoT, everyday objects become part of a network of networks by fitting them with sensors to gather and share information, and unlike computers, they often operate without input from humans.

But the students, who participate not as a part of a class or certificate but as volunteers, decided it was important to keep their end goal in mind: to help people keep track of their medication schedule. The issue is a big one, with a cost to the American health care system of $100 billion to $289 billion annually, according to the Centers for Disease Control and Prevention, and the cause of 125,000 deaths each year.

Patients who can control chronic diseases like diabetes save $10 for every dollar spent in management. The current Medcuff device can be built for $15 each, Chulick says, and that’s without mass production. Mack envisions health insurers or pharmacies offering it free to patients, given its potential ability to reduce costs and improve health.

The team spoke with a few of the many business leaders who attended the lab’s first open house on May 1, Mack says, and “several insurance companies” have since contacted him. The team was recognized because they solved a real-world business problem.

“We heard from so many people: ‘This would be good for my parents,’” Mack says. “A lot of people said this was a big problem.”

The team continues to improve Medcuff’s design, including plans to enclose the small device (it fits comfortably in the palm of your hand) in a watch-like band and adding a screen with graphics.

Another team, led by two biomedical engineering undergraduates, Zach Vargas and Scott Carson, won the second of three prizes awarded to a total of 14 projects at the IoT open house: Most Innovative Technology. Like the Most Potential Impact, the award was $500 for the team.

Vargas and Carson built from scratch an armband that uses biosensors to translate arm and hand motions into other actions. Their ultimate goal is to help create technology that would wirelessly translate American Sign Language to text, including on smartphones.At the open house, they connected with people in the non-hearing community and they are eager to develop partnerships. They are also looking forward to working with Thalmic Labs’ Myo Band, a not-yet-available product similar to the armband they built, which the IoT Lab is in line to pre-purchase later this summer. It will enable Vargas and Carson to focus their energies on the next phase of their project: developing software.

The long-term project will require immense amounts of data collection in order to build a dictionary of signs, which Carson and Vargas plan to model off of speech recognition technology.

The pair knows the road to building a fully-marketable product is a challenging one, but the IoT Lab has helped smooth out the journey.

The self-funded lab relies on financial and in-kind contributions from companies interested in supporting students and getting involved.

For the first phase of the lab, the plan was only to produce demos of leading edge products and to grow from there, says Sandra Bradley, IoT research director of consumer and retail applications, but given free rein and fueled by sheer passion, many teams moved faster and further than seemed possible.

“Our next phase is to bring industry projects and sponsorships to the lab so that we can continue to grow in terms of extending and innovating technology,” she says. “There is tremendous momentum in terms of the interest we have had from companies interested in exploring IoT and we see ourselves growing and creating a real center of innovation here on campus very quickly.”

For the members of the Medcuff team, the IoT open house was validating, as it helped them realize the value of their idea. For Carson and Vargas, the event and their experience in the IoT Lab has given them a new way to channel their passions.

“We like to tinker around with stuff,” says Carson. “That’s the thing about the Internet of Things Lab — you get to do the tinkering but you have the end goal and support.”

The lab also welcomes involvement from companies and other groups with shared interests. Email IoT faculty director Raj Veeramani or Sandra Bradley for more information or a lab tour. Several are already scheduled this summer. 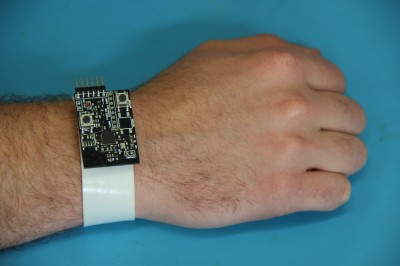 Caption: The Medcuff device, shown here in prototype form, will be enclosed in a watch-like band and have a screen with graphics. 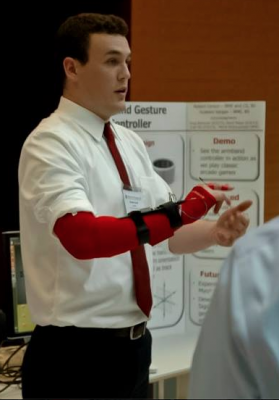