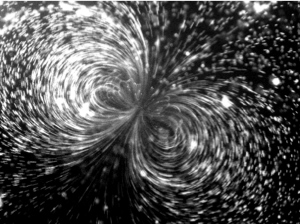 Cavitation microstreaming generated by a SonoVue microbubble and marked by fluorescent beads. Under ultrasound exposure, microbubbles can produce streaming flows which may contribute to blood-brain barrier opening and will be investigated directly using our in vitro platform.

Newswise — WASHINGTON, D.C., June 25, 2017 -- Your brain is armored. It lives in a box made of bones with a security system of vessels. These vessels protect the brain and central nervous system from harmful chemicals circulating in the blood. Yet this protection system -- known as the blood-brain barrier -- also prevents delivery of drugs that could help treat patients with brain cancers and brain diseases such as Alzheimer’s disease. The heavily guarded brain has long frustrated physicians tending patients in need of brain treatments without surgery.

With recent advances in technology, the blood-brain barrier can now be opened safely, noninvasively and in a targeted manner using ultrasound. One of the newest approaches aiming to advance this research will be presented during Acoustics ’17 Boston, the third joint meeting of the Acoustical Society of America and the European Acoustics Association being held June 25-29, in Boston, Massachusetts.

“The key advantage of our system is that it uses three modalities -- involving light, sound, and electrical fields -- to simultaneously monitor acoustic emissions, blood-brain barrier disruption and recovery, and the biological response of blood-brain barrier cells in real-time,” said Miles M. Aron at the University of Oxford.

“The treatment can be monitored externally by ‘listening’ to the re-radiated sound from the cavitation agents interacting with the ultrasound field. These acoustic emissions provide information regarding the energy of cavitation within the blood vessels and are already being used to adjust ultrasound parameters in real-time to reduce the likelihood of damaging healthy cells during treatment,” Aron said.

In addition, the team uses fluorescent probes to monitor either changes in the cells during treatment, or mechanical and chemical effects from the cavitation agents as they are exposed to ultrasound in real-time.

“By analyzing multiple sources of data during ultrasound exposure and throughout BBB recovery, we aim to better understand this promising new treatment,” Aron said. “With the Oxford Centre for Drug Delivery Devices, OxCD3, we are currently working on a non-invasive method to detect and treat brain metastases before they become deadly. Our in vitro system will play a critical role in the development of this and other next-generation approaches to ultrasound-mediated blood brain barrier opening.”