22-Jun-2011 6:00 AM EDT, by University of Arkansas, Fayetteville
favorite_border 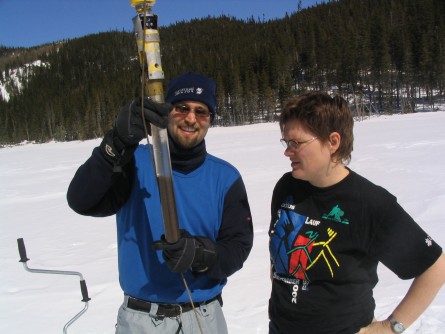 Sonja Hausmann of the University of Arkansas and her colleague Guillaume St.-Onge of the University of Québec at Lac du Sommet with a McGlue corer in March of 2005. The researchers studied diatoms from the lake to determine how climate has changed in the past 9,500 years.

Newswise — FAYETTEVILLE, Ark. – A University of Arkansas researcher and her colleagues studied core sediments from a shallow boreal lake and found that storm activity has increased substantially over the past 150 years. The rise in storm frequency appears to be linked to solar activity, but also may be linked to higher global temperatures resulting from increased amounts of greenhouse gases.

“We don’t really know if it is solar activity or if it is greenhouse gases because what we found correlates with both,” Hausmann said.

In the last 150 years, human activity has considerably increased the concentration of greenhouse gases in the atmosphere. Greenhouse gases trap heat in the lower atmosphere of Earth, raising the Earth’s temperature. Scientists have predicted that rising temperatures could lead to more frequent storms, and Hausmann’s evidence supports this.

However, Hausmann also compared the diatom-storm evidence to solar activity, which includes sunspots. Solar activity peaks and dips on 11-year and longer cycles. The diatom activity appears to fluctuate with the solar cycles, with stormy periods coinciding with high solar activity.The researchers took core samples at Lac du Sommet, a shallow mountain lake in the Laurentian Mountains of eastern Canada. They were able to extend their climate reconstruction back 9,500 years.

By examining relationships between modern diatom communities and their environment, Hausmann and her colleagues can reconstruct various historic environmental changes quantitatively. In this case, they examined the residual effect of storms on the diatom communities in lake sediments. High winds cause the water column to circulate and mix the diatoms and nutrients in the water.

The diatom evidence shows that storms have increased substantially over the last 150 years, Hausmann said.She and her colleagues compared these findings to other tiny proxies: non-biting midges and pollen. Midge larvae live in the lake sediment and act as good indicators of temperature changes in a given environment. At Lac du Sommet, the midge evidence shows that temperature, while variable, has not recently increased in the same manner. Pollen evidence tells a similar story.

“The diatoms do not show a temperature effect. They show wind,” Hausmann said. “We are looking at climate change, not just temperature differences.”

Hausmann will return to Lac du Sommet during decreased periods of solar activity to see if diatom activity shows a similar decrease.