Left: Teosinte ear; right: corn ear; center: ear from the first generation hybrid of a cross between teosinte and corn. 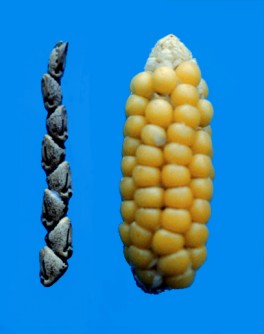 Teosinte and "reconstructed" primitive corn created by crossing teosinte with Argentine pop corn and then selecting the smallest offspring. This ear resembles the earliest archaeological corn recovered from the Tehuacán valley in Mexico.

Newswise — If not for a single genetic mutation, each kernel on a juicy corn cob would be trapped inside a inedible casing as tough as a walnut shell. The mutation switches one amino acid for another at a specific position in a protein regulating formation of these shells in modern corn’s wild ancestor, according to a study published in the July 2015 issue of GENETICS, a publication of the Genetics Society of America.

“Humans completely reshaped the ancestor of corn, effectively turning the cob inside out. Our results show that a small genetic change has had a big effect on this remarkable transformation,” says study leader John Doebley of the University of Wisconsin-Madison.

The domestication of corn has long fascinated biologists studying evolution. Corn can provide clues to how organisms change under selection — whether it’s natural selection or selection by humans choosing the most delicious and productive plants to grow in next year’s crop.

Corn was domesticated in Mexico around 9,000 years ago from the wild grass teosinte. Teosinte seeds are protected by a hard casing that makes them impractical to eat, but ancient plant breeders developed varieties with “naked kernels.” In these plants, the structures that form the seed case instead turn into the cob in the center of the ear, leaving the seed exposed for us to eat.

Besides having lost the inconvenient seed case, corn kernels today remain firmly attached to the cob, rather than scattering easily as they do in teosinte. The cobs are also much larger, and the corn plant has fewer leaf branches than its ancestor. Gene changes for these traits were discovered by Doebley and his colleagues over the past few decades.

All these changes evolved relatively quickly, within a few thousand years at most. Previous studies have shown that many of the dramatic differences between corn and teosinte were built on a foundation of genetic changes at perhaps as few as six genes.

One of those genes, tga1, controls formation of the seed case. The TGA1 protein encoded by the gene acts as a “master regulator” of a suite of other genes involved in this complex developmental process.

“TGA1 acts a bit like an orchestra conductor coordinating the actions of many different musicians,” says Doebley. “The same orchestra can play in different ways, depending on the conductor’s signals.”

In teosinte, TGA1 regulates genes in a way that helps seed cases form. But in corn, TGA1 action disrupts this process, resulting in cases that are smaller and don’t close over the kernel properly. But what exactly is different about the two versions of the tga1 gene?

To find out, the team compared the tga1 DNA sequence in 16 different varieties of corn and 20 varieties of teosinte. They discovered only one change present in all the corn samples but in none of the teosinte: at one particular position in the tga1 sequence, the corn version carried a “C” DNA base instead of the “G” found in teosinte. This single nucleotide difference causes one amino acid in the TGA1 protein to be switched from a lysine in teosinte to an asparagine in corn.

When the researchers tested the effect of this amino acid substitution on TGA1, they found that the corn version of the protein had a greater tendency to bind to itself in pairs of molecules called dimers. The genetic difference also seemed to turn TGA1 into a “repressor” of the genes it controls, decreasing their expression.

“In the conductor analogy, the teosinte TGA1 directs the orchestra to play loudly, but the corn TGA1 tells them to play a little softer—or in biochemical terms, the genes are repressed,” says Doebley. This dampening of gene expression is enough to affect the structure of the seed case during development.

Consistent with this idea, the researchers found that turning down the volume on expression of the corn tga1 gene itself—which should relieve repression of the “orchestra” genes—enlarged the seed case remnants in corn. In other words, levels of the corn version of tga1 control the size of the corn structures that would normally form the seed case in teosinte. Doebley remarked that "the real credit goes to lead author, Huai Wang, for this series of brilliant experiments that solved a big problem in maize evolution.”

These results provide an example of how selection by ancient plant breeders triggered profound structural change in an organism through relatively minor genetic alterations, allowing new traits to evolve rapidly. “Twenty years ago, it was much harder to study evolution in such detail. It’s exciting that we can now understand complex examples like maize domestication at their most fundamental level,” says Doebley. 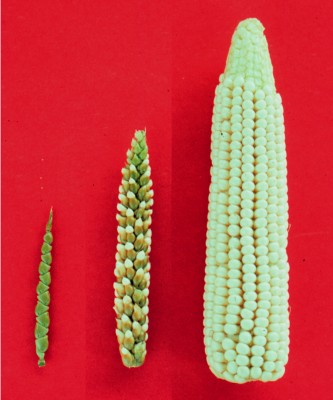 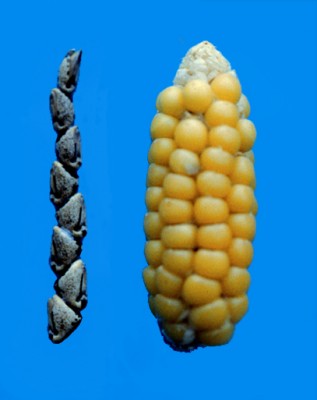 Caption: Teosinte and "reconstructed" primitive corn created by crossing teosinte with Argentine pop corn and then selecting the smallest offspring. This ear resembles the earliest archaeological corn recovered from the Tehuacán valley in Mexico.